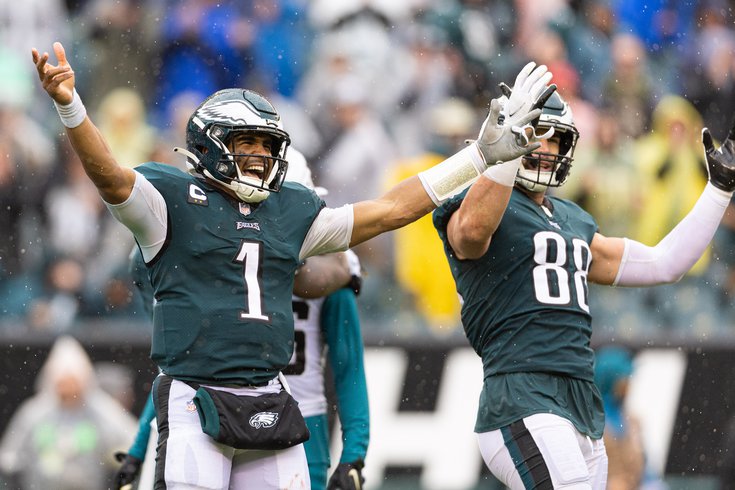 Week 4 of the NFL season is in the books, and the Philadelphia Eagles are the lone remaining undefeated team. Because there is so much mediocrity in the NFC so far this season, we still don't have any obituaries yet. Soon. Let's get to the Hierarchy.

16) Panthers (1-3): It's probably pretty safe to kill this team off, but they're only one game behind in the NFC South, so we'll exercise caution for one more week. Until then, the following stat seems bad:

The #Panthers are now 1-26 under Matt Rhule when the opponent scores at least 17 points – including 24 losses in a row.

15) Commanders (1-3): We could very easily rail on Carson Wentz for his atrocious play the last couple of weeks, but I don't think the stupid idiot Commanders as an organization are getting enough heat for the resources they coughed up to get him:

The Commanders also took on Wentz's salary in full, and in fact, he has the sixth-highest salary cap number in the NFL among quarterbacks in 2022 (not average annual salary, to be clear), at $28,295,118.

It's a trade that was was laughably stupid then, and has turned out to be even worse after the first month of the season.

If he keeps playing the way he has the last two weeks, Wentz is going to get benched at some point soon (a) so that the Commanders won't have to give away their 2023 second-round pick, (b) so that he won't have to play in Philly Week 10, and (c) you know, because he sucks.

The calls for Wentz's benching have already begun, by the way. Taylor Heinicke is 29, and Commanders fans already know that he has a rag arm, and no ceiling at all. And they're like, "Yeah, we'd rather watch him."

14) Bears (2-2): Congratulations to Justin Fields, who completed more passes against the Giants (11) and threw for more yards (174) than he has in any game so far this season. 🍾

It's very funny to me that this was one of his completions:

Lateral after lateral on the Bears’ final play of the game. pic.twitter.com/U7MQCGhuGr

The play-by-play on that:

12) Saints (1-3): The Saints have an NFL-worst turnover differential of -7. They also lead the league in giveaways, with 11. You know what the Saints didn't do under Sean Payton? Turn the ball over. Payton's last five years in New Orleans:

Out of curiosity, I looked up what Dennis Allen's turnover differentials were when he was the head coach of the Raiders a decade ago:

The Saints also have an NFL-worst 319 penalty yards against them, and they have a grand total of 3 first quarter points. This team is a sloppy mess.

The head coach is kind of a big deal in the NFL, and it always seemed silly when people hand-waived away the loss of Payton, as if there weren't going to be serious ripple effects.

That clinch walk wouldn’t have made it 😂 https://t.co/tYvaWQSaa6

10) Falcons (2-2): I can't think of anything to write about the Falcons, so here are my bird team power rankings:

9) Cardinals (2-2): The Cardinals have been outscored 31-0 in the first quarter of games this season.

8) Giants (3-1): The Giants' super easy stretch of their schedule is over, and good on them for capitalizing by winning three of their first four games. Their games will now get a hell of a lot harder, and they have quite a bit of travel in their future as well.

By my estimation, the Giants are going to fly 13,378 miles over the next four weeks.

7) Rams (2-2): Matthew Stafford has thrown 7 INTs, most in the NFL, and he has been sacked 16 times, tied for second-most in the NFL. The Rams' offensive line is very banged up, buuuuuuut... he don't look right.

5) Cowboys (3-1): The Cowboys' defense has been really good through the first four games of the season, and as such, by law, their fans must be fed overexaggerated delusions of grandeur.

4) Vikings (3-1): Credit where it's due — Kirk Cousins threw a beauty to take down the Saints on Sunday.

Kirk Cousins has thrown a dagger in the final minutes in two consecutive games. He’s so good at putting the right amount of touch on go routes. pic.twitter.com/tNlZ10yhPU

On a side note, what in the hell are the Saints doing covering Justin Jefferson man-to-man with no safety help with the game on the line?

2) Packers (3-1): I would say you should just pencil in the Packers at 6-1 with the Giants, Jets, and Commanders on their schedule the next three weeks, but they almost lost to a bad Patri*ts team quarterbacked by Brian Hoyer and Bailey Zappe.

1) Eagles (4-0): The Eagles have the second ranked offense in the NFL, yardage-wise. They have the third ranked defense. Hmm, I wonder if that means that have a pretty good yardage differential.