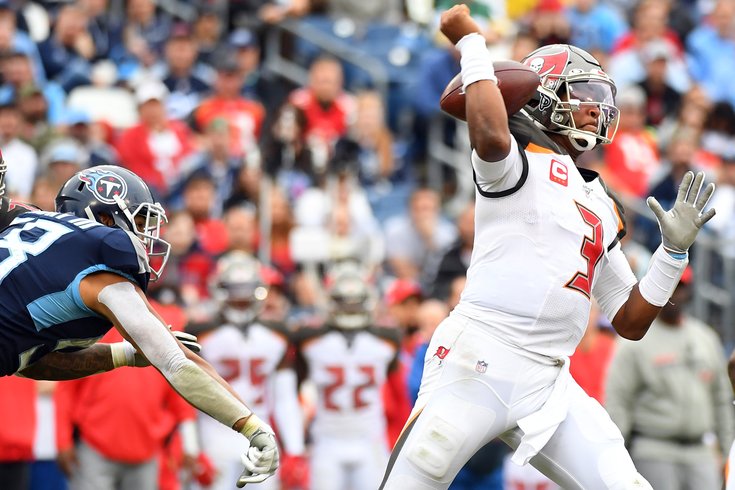 The Buccaneers' QB coach should tell Jameis Winston to throw the ball with his hand, not his forearm.

Week 8 of the 2019 NFL regular season is in the books, and we have our third obituary of the season. That would be the rudderless Tampa Bay Buccaneers. Let's just get right to it.

In his first five years as GM of the Bucs, Jason Licht has objectively been horrendous, whether it be trading up into the second round for a kicker, or swinging and missing with a No. 1 overall pick on Jameis Winston. Before the season began, in his first five years as GM, the Licht regime has compiled a 27-53 record, while finishing dead last in the NFC South in four of his five years.

Instead of making the clear decision to replace Licht, the Bucs gave him a five-year contract extension, lol.

Seven games into Year 6 of Licht's tenure, the Bucs' record is now 29-58. That would be a winning percentage of 0.333. If the Bucs somehow rattled off 9 straight wins, Licht's winning percentage would still be worse than Bruce Allen's in Washington.

Looking forward, this team has a lot to fix, most notably the quarterback position and the offensive line. Bruce Arians is a good coach with a nice resume, maybe, but this team isn't going anywhere until they replace the GM who is in over his head. 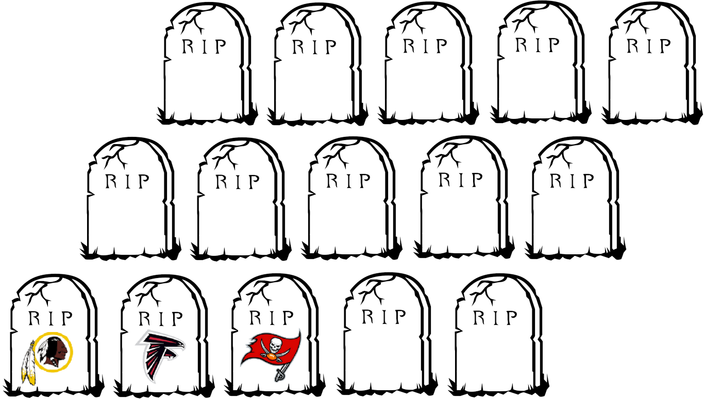 13) Giants (2-6): We could easily kill off the Giants this week, and feel perfectly fine about it, but since we already eulogized the Bucs, let's wait until next week to give the Giants their proper due, especially since they're playing on Monday Night Football Week 9. Let's just save all Giants talk for then.

12) Cardinals (3-4-1): The Cardinals are headed in the right direction under Kyler Murray, but they have no chance of contending this year, so I'm not sure why they traded a draft pick for Kenyan Drake, a guy in the final year of his deal, but ¯\_(ツ)_/¯.

11) Bears (3-4): For all the searching and obsessing Matt Nagy did over finding a kicker this offseason, it is hilarious that he didn't put his guy in the best position possible to make a game winning field goal.

With 43 seconds left, the Bears were down 1, but they were on the Chargers' 21 yard line, and the Chargers had no timeouts left. Instead of running another play and trying to get a closer attempt, Nagy just decided that a 41-yard field goal try was acceptable enough, so he had Mitch Trubisky kneel it to bleed the rest of the time off of the clock. And sure enough...

OOOOOOPS!!! I don't know how close that was to going through, but a few extra yards would have helped. Chicago media rightly questioned the decision to kneel it, and Nagy compounded his mistake by giving one of the mostly stubbornly wrong head coach answers you'll hear this year.

Someone get Matt Nagy a new PR guy pic.twitter.com/s0vmah4AD9

If you're looking for a reason why the Lions have been competitive this season, it's Stafford.

9) Panthers (4-3): I went to Amsterdam once, and if you've never been there, there is an absurd number of people riding bikes. I mean, look at this chaos. It's ridiculous:

Three days into my trip there, I somehow hadn't seen a bike accident, which was mind-blowing to me. I didn't necessarily want to see one. I certainly didn't want to see anyone get hurt. But at the same time it was in a weird way bothering me that I hadn't seen one after three days, because it was defying all odds.

Finally, on my last day there, literally on my walk from the hotel to the train station, there was a doozy of a bike crash.

That's what the Panthers' de-pantsing at the hands of the Niners felt like this week after they had rattled off an unlikely four straight wins.

8) Eagles (4-4): In the Eagles' two best games this season — wins over the Packers and Bills — the offense racked up a lot of yards on the ground behind a good rushing game plan. Winning that way is not sustainable, especially without a good defense. Don't let one good game in bad conditions fool you. The receivers are still crippling the potential of the offense:

Whenever DeSean Jackson returns to the lineup, that will be a huge boost, but I don't see how anyone could realistically view him as a player you can depend on to play each week.

The Eagles have to add a receiver at the trade deadline, and hope that he can assimilate into the offense better than Golden Tate did a year ago. They really have no choice, and they're probably going to have their feet held over the coals on the price.

7) Rams (5-3): Let's check in again on the Todd Gurley watch, halfway through the season:

I think we can go ahead and call that a pattern. Bennett is a talented player, but he clearly wears out his welcome quickly, and my understanding is that the Eagles were sometimes frustrated because he often played for himself, as opposed to playing assignment defense.

I think most viewed this trade for the Cowboys as high risk, low reward, because the cost was a 7th round pick that could become a 6. However, the risk isn't the trade compensation.

5) Vikings (6-2): The Vikings and Packers both have to play 3 of their next 4 games on the road. Here's what their schedules look like:

Has the point ever been made about Kirk Cousins being unable to consistently beat good teams?

Anyway, the Vikings are hot right now, but they'll probably need to win at least three of those games to keep pace with the Packers, who have a game lead over them in the NFC North as well as a head-to-head advantage.

4) Seahawks (6-2): An under-the-radar injury that occurred this past weekend was the Seahawks' loss of center Justin Britt for the season with a torn ACL. That is a major loss on an already shaky offensive line.

Over the next six weeks, the Seahawks will face a slew of big-name defensive tackles, including Arik Armstead, DeForest Buckner, Ndamukong Suh, Fletcher Cox, Aaron Donald, and Gerald McCoy. The interior of their offensive line is going to be tested.

3) Packers (7-1): Remember when some people tried to say that Aaron Rodgers was the problem, and not Mike McCarthy?

1) Saints (7-1): The Saints somehow went 5-0 with Teddy Bridgewater at QB, and Drew Brees returned this past weekend. In case there was any thought the Brees must be rusty upon his return...