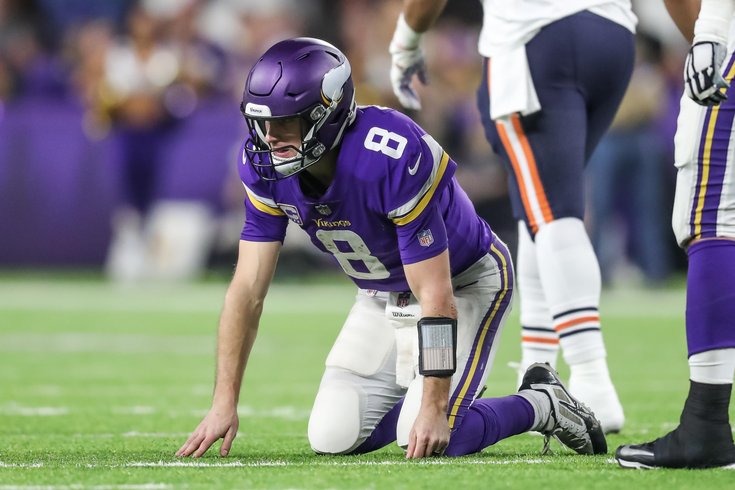 The 2018-2019 NFL playoffs are here, and we have one last obituary to write to close out the regular season. That would of course be the suddenly dysfunctional Minnesota Vikings.

Kirk Cousins' record against teams with a winning record is now 5-25. I believe the following video captures that sentence perfectly:

Cousins' cap numbers the next two seasons are $29,000,000 in 2019 and $31,000,000 in 2020, and as you already know, it's fully guaranteed. Minnesota isn't getting out of that. They're stuck with a mediocre quarterback making elite money, while their offensive line still stinks, and their good-not-great defense isn't dominant enough on a consistent basis.

Worse, Mike Zimmer is a modern-day Buddy Ryan who wants his offense to cater to the success of his defense, demanding that his offensive coordinator run the ball on a team with two stud receivers, a very good tight end, and a pass-catching running back.

When you look around the league at quarterback - head coach pairings, Cousins and Zimmer are uninspiring. I'd take at least half the league's QB-HC pairings over them, with no hesitation.

6) Eagles (9-7): The Eagles' defense failed to close out games against the Titans and Panthers earlier this season, but it's pretty remarkable what they have done despite their injuries. They were 12th in points allowed, they were the No. 1 red zone defense, and they were the 6th best third down defense, despite losing their top three CBs, their starting FS, a starting DE, a starting DT for most of the season, the starting MLB for large chunks of the season, and sporadic other injuries to role players that forced Jim Schwartz to insert guys off the street into his lineup.

More recently, they started being the opportunistic turnover-creating defense we saw for most of 2018. If you think Schwartz has to go after this season, you're crazy.

5) Cowboys (10-6): On Sunday, the Cowboys opted not to rest starters, with the exception of Ezekiel Elliott and a couple of nicked-up offensive linemen, and went all out for a meaningless win over the New York Giants, in what turned out to be an exciting game:

4th and 15 with a little SAUCE! (via @dallascowboys)#NYGvsDAL #DallasCowboys pic.twitter.com/C0z6ygVrvp

On the bright side, the Cowboys got a win, and perhaps some positive momentum heading into the playoffs without getting anyone seriously hurt. On the downside, they gave up 35 points to a team that has managed to put up 35 points three times in the last 51 games.

They also helped the Giants' draft positioning. Had the Giants won, they'd be picking 10th instead of 6th.

To note, Bortles, Osweiler, and Wilson were all playing against quarterbacks who were also making their first ever start in the playoffs.

The lone quarterback in the NFC making his first playoff start this postseason is Trubisky.

3) Seahawks (10-6): If I'm ranking quarterbacks I'd want to have for this playoff run in the NFC, I'd probably go:

I'm surprised how close it was in my mind on Brees and Wilson. I think there's certainly an argument for the latter.

2) Rams (13-3): The Rams have played four of the other five teams in the NFC playoffs already during the regular season. Here's how those games went:

In other words, they've already lost to three of those four teams. #Analysis.

There's a lot riding on these playoffs for Sean McVay and Jared Goff. You don't want to be the team that wins 24 regular season games in two years but is one-and-done in consecutive seasons, especially after a Dream Team-esque offseason.

Over the last five seasons, it's been kind of a big deal.