With one game left in the regular season, the Philadelphia Eagles are an incredible 13-2, but with alarmingly bad play in their last two games against crappy opponents, they appear to be vulnerable heading into the playoffs.

Let's take a look at the hierarchy of the NFC, but first, we have another obituary. 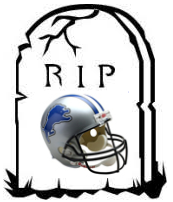 The end of the Lions' schedule was set up perfectly for them to sneak into the playoffs. With three games remaining, they had to run the table against the Buccaneers (4-11), Bears (5-10), Bengals (6-9), and Packers (3-6 with Brett Hundley playing the majority of the snaps).

They took care of business against the Bucs and Bears, but got beaten handily by a Bengals team that had been outscored 67-14 in their previous two games, and looked like a team that had quit on the season.

From 2012 to 2016, the Lions spent six Day 1 or Day 2 picks on offensive linemen, including three first round picks. Ultimately, however, terrible OL play is what sunk their season.

7) Seahawks (9-6): The Seahawks' offense looked almost as bad as the Eagles' this weekend, but they too were able to pull out a road win over Zeke Elliott and the Cowboys.

On a side note, the Seahawks' locker room must be a mess:

Earl Thomas runs to greet Jason Garrett, then as he walks into the COWBOYS lockerroom, he says, “If you have a chance to get me, come get me.” pic.twitter.com/N395wVU2Jz

Can you imagine if an Eagles player did this?

6) Falcons (9-6): For the second straight week, the Falcons are in if they win. Fortunately for them, they don't choke under pressure. Oh wait.

5) Panthers (11-4): The Eagles aren't the only NFC contender who looked shaky against a crap team this weekend. The Panthers struggled mightily against the Buccaneers, but will have a chance to bounce back in Week 17. Carolina can still win the NFC South with a win in Atlanta and a Saints loss in Tampa.

4) Rams (11-4): The Rams would almost be better served to lose this week and set themselves up for a second-round playoff matchup with the Eagles instead of the Vikings.

2) Vikings (12-3): Are there scarier teams in the NFC than the Vikings? Yeah, I'd say that the Saints and Rams are scarier opponents, from the Eagles' perspective. However, Minny has the luxury of sitting the first week out, while the Rams and Saints could find themselves in dog fights with the Panthers and Falcons (or Seahawks), and then they'll get whoever emerges in their own building. Like the Eagles, they have a major advantage over the rest of the field.

In other words, playoff seeding, especially if you're No. 1 or No. 2, is kind of a big deal. #Analysis.

1) Eagles (13-2): A week ago, the thinking was, "Nick Foles is hardly the problem for this team heading into the playoffs. The defense better get it together." This week, it's going to be, "OK, the defense is back, but Nick Foles should be catapulted 50 miles into the Atlantic Ocean."

Still, the Eagles have home-field advantage throughout the playoffs, and they're 7-0 there this year. They now also have three straight tough wins under their belt, which may help when it matters. That's certainly the optimistic view, but they do have three weeks to get the offense back on track.