The Philadelphia Eagles are now 13-2 after they won 19-10 in extraordinarily ugly fashion over the Oakland Raiders on Christmas night. As always, win or lose, we hand out 10 awards.

1) The 'Smelling Blood' Award: The Vikings, Rams, Saints, Panthers, and Falcons (or Seahawks)

The rest of the NFC playoff teams have to love what they've seen out of the Eagles the last two weeks. 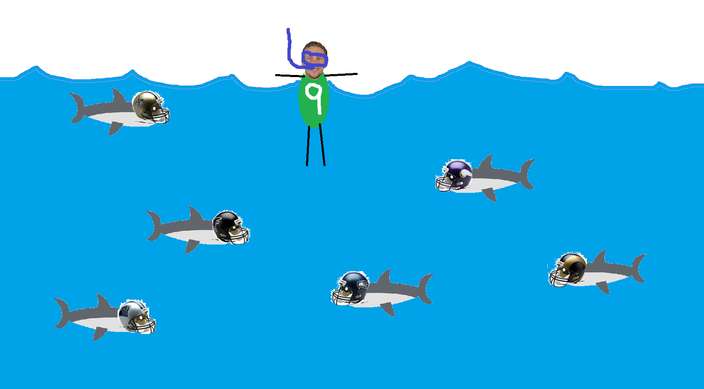 The Eagles were obviously not going to be as potent on offense in transitioning from Carson Wentz to Nick Foles, but Monday night really revealed the differences between the two players.

Everything Foles does is slower. His release is slower, the ball gets to its target slower, decision making is slower, his foot speed is obviously slower, and even with Wentz often holding onto the ball longer than most quarterbacks, it seems that the time from snap to throw is significantly slower.

The Eagles' offense, led by Foles, just looks like it's in slow motion.

After some shaky moments early, the Eagles' defense won this game. In the Raiders' last eight possessions, the Eagles forced five turnovers. That is outstanding. Give a hat tip to Derek Carr for playing even worse than Foles.

After a very rough outing last week against the Giants, Darby came to play against the Raiders, making perhaps the biggest play of the night. With less than a minute to play in regulation, Darby stepped in front of a pass intended for Amari Cooper, and intercepted Carr, setting up the Eagles for a chance to win with a field goal.

In the Eagles' Week 3 win over the New York Giants, Jake Elliott drilled a 61-yard field goal to win it with no time left on the clock. Against the Raiders, after missing an easy 33-yarder early, Elliott hit a 48-yarder that all but sealed the win. Elliott has been excellent on long field goal attempts, and clutch ones for that matter, but the short ones have been an adventure.

Oh yeah, we should probably mention that the Eagles wrapped up home-field advantage throughout the playoffs with the win. That's kind of a big deal, right? The Eagles are now 7-0 at home this season and have a nine-game winning streak at the Linc.

7) The 'No Rest' Award: The Eagles' offensive starters

The major debate this week is going to be whether or not the Eagles should rest their starters in a meaningless Week 17 game against the Dallas Cowboys.

The defense? Yeah, maybe you let some of those guys rest.

The offense? I can't see how Doug Pederson can possibly feel comfortable going into the playoffs with the performance the offense put together against the Raiders. Against one of the worst defenses in the NFL, the Eagles' receivers – Alshon Jeffery, Torrey Smith, and Nelson Agholor – combined for 5 catches on 14 targets for 40 yards.

Nick Foles can use all the reps he can get with the first team offense before the postseason begins.

In his worst game of the season, Jeffery had two targets come his way, and he had zero catches, including a bad drop on an ugly (but very catchable) throw from Foles. The Eagles' other outside receiver, Torrey Smith, had one catch on five targets for five yards.

9) The 'Pick Me Up' Award: The Eagles' offensive-defensive luck

In some games this season (Rams, Giants, Redskins, etc), the offense picked up the slack for the defense, which maybe wasn't having its best day. In other games, like in their win over the Raiders, the defense had to step up for a stagnant offense. The Eagles are 13-2 partly because of the way one unit has been able to over-perform for another struggling unit. It's been rare when both sides of the ball have played poorly.

10) The 'One and Done' Award: The Eagles' Super Bowl Aspirations

If the Eagles fail to win a playoff game this year, they will reach double digits for consecutive seasons without one. They aren't beating anyone in the playoffs if they play anywhere remotely close to the way they played Monday night.