The 2017 NFL regular season is in the books, and we're down to 12 teams. Let's take a look at the hierarchy of the NFC, but first, we have one last regular season obituary. 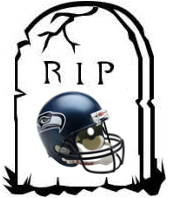 With an Atlanta Falcons loss and a Seattle win at home over the Arizona Cardinals Week 17, the Seahawks would have gotten into the playoffs for the sixth straight season. The Falcons won, so it wouldn't have mattered anyway, but the Hawks did not take care of their own business, losing to a Drew Stanton-led Cardinals team with absolutely nothing to play for.

It feels a lot like this Seahawks team is at the end of its run. Their defense is still very good, but not dominant in the way that it used to be. Of course, losing Richard Sherman, Kam Chancellor, and Cliff Avril for the season has something to do with that. Still, Sherman and Chancellor will both turn 30 this offseason, while the third mainstay of the Legion of Boom, Earl Thomas, was basically begging the Cowboys to come get him after the Seahawks' Christmas Eve win in Dallas.

Imagine the backlash Thomas would get for that if he played for the Eagles.

Offensively, Russell Wilson has to perform acts of magic behind an awful offensive line, which proved to be unsustainable over the course of a 16-game season in 2017.

From structural standpoint, there were rumors that head coach Pete Carroll might retire, which Carroll denied.

People talking about retirement... I ain’t old enough to think about retiring! 🕺

Before this season, the Seahawks won the NFC West three out of the last five years. The Cardinals won the other two. With the Los Angeles Rams and the San Francisco 49ers seemingly on the come-up, the balance of power could soon be turned upside down.

6) Falcons: Atlanta is obviously a dangerous team with Matt Ryan, Julio Jones, and a very good RB duo in Devonta Freeman and Tevin Coleman. Still, the Falcons' offense just isn't at all what it was a year ago when Atlanta led the NFL in scoring. A Falcons win over the Rams in the wild-card round would (A) eliminate an even more dangerous Rams team, and (B) give the Eagles their best possible matchup in the divisional round.

5) Panthers: The Panthers were swept by the Saints in the regular season, and they were beaten handily in both games:

According to David Newton and Mike Triplett of ESPN, 13 of the 20 times since the league merger in 1970 the team that won two regular-season games went on to win the playoff game in the third matchup. The last team to win in the playoffs over a team that swept them during the regular season was when the New York Giants beat the Dallas Cowboys during the 2007 season.

To get to the Super Bowl, the Panthers are going to have to win three straight road games, assuming the Falcons don't also advance to the NFC Championship Game. That is going to be an incredibly tough road, and it starts with a team that owned them this season.

4) Eagles: Nick Foles just looks, so, so bad. The Eagles are going to be underdogs against whoever they face in their first playoff game.

3) Rams: In 2016, the Falcons played the Rams in LA, and blew them out, 42-14. Matt Ryan did whatever he wanted to the Rams defense, and Jared Goff had two turnovers returned for touchdowns against him. Over his career, Ryan is 4-0 against the Rams. Obviously, over the last decade-plus, the Rams have been trash, and looked nothing at all like the potent scoring machine they were in 2017. Still though, I wonder if the Falcons are to the Rams what the Seahawks are to the Eagles.

2) Saints: In my view, the Saints are the most complete team in the NFC. They have a balanced passing-rushing attack, and a defense that is so much better than what it has been over the last half-decade. This is the last team the Eagles want to see in their first playoff game, but it is also their most likely first opponent.

On a side note, they have to be the most hateable team remaining in the NFC, right? Sean Payton is a clown.

1) Vikings: We all know that Case Keenum is going to get hurt in the NFC Championship Game, the Vikings win anyway, they activate Sam Bradford for the Super Bowl, and he wins MVP. You all realize that this is exactly what is going to happen, right?