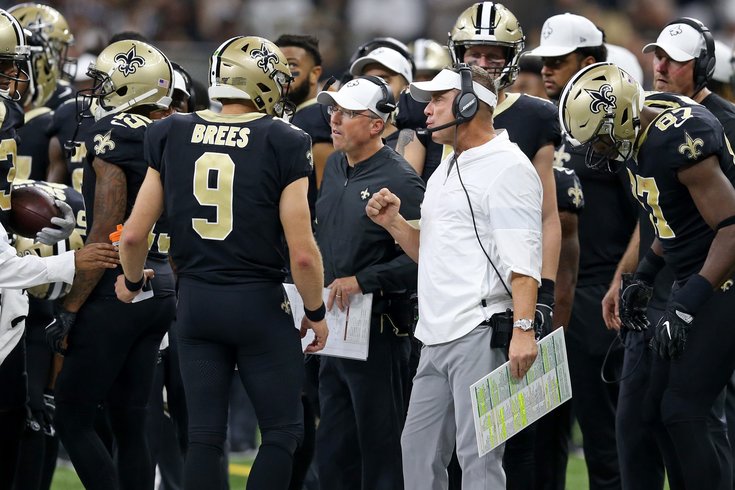 "Drew, tell the RG to purposely break their DE's fibula, and then hit Michael Thomas over the middle on a drag route."

Week 1 of the NFL season is in the books, and contrary to the typical first slate of games, there wasn't anything too out of the ordinary, results-wise. Let's just get right to it.

Not only did they lose the game, but they also lost second-year RB Derrius Guice to a knee injury, and iDL Jonathan Allen to an MCL sprain.

15) Buccaneers (0-1): In a span of four plays against the Niners on Sunday, Jameis Winston had the following four plays:

Richard Sherman took it to the house for his first pick as a 49er. #SFvsTB

So that's how things are going in Tampa. Still, down six with a little more than two minutes to go, Winston had a chance to engineer a game-winning drive, until he threw his second pick-6 of the game, and this one was even uglier:

14) Giants (0-1): Here are three of the touchdowns the Giants surrendered Sunday afternoon.

The Giants are bad at covering people. pic.twitter.com/nJ9ObYKyvj

My conclusion: Their defense is very, very bad. A week ago, I thought the Giants might eke out seven wins somehow this season. I can admit when I'm wrong.

13) Cardinals (0-0-1): I'm already out on Kliff Kingsbury. In overtime against Detroit, with the score tied at 27, facing a 4th and 7 from the Lions' 46 yard line with 1:10 left to play, at home, the Cardinals were faced with an obvious "go for it" situation. If you punt, the best you can hope for is a tie, which does little more than give you a tie-breaker at the end of the season if you end up with the same number of wins as another team.

If you go for it and get it, you're very, very likely going to just win outright. But also, you're telling your players that you believe in them to win, which can be a strong message sent that stays with your guys the rest of the season. If you go for it, and don't get it, you can still just play good defense, keep the opposing team out of field goal range, and still preserve the tie.

Kingsbury punted. What a gutless, cowardly, not-ready-for-the-big-leagues decision. If I'm a player who played my ass off for 70 minutes in that game, and my coach would rather preserve a tie than take a reasonable chance on getting an opening week W, I'd be furious.

12) Lions (0-0-1): With 2:47 left in the game and the Lions holding an 8-point lead, they ran a little swing pass on 3rd and 5 that would have picked up a first down, except... offensive coordinator Darrell Bevell (on the orders of Matt Patricia) called timeout just before the play because they didn't think Matthew Stafford would get the ball snapped before the play clock expired.

Oops! That first down would have all but wrapped up a win. Instead, Stafford threw incomplete on the ensuing play, the Lions would punt, and the Cardinals would tie it up and send it to overtime.

You have to have trust in your 10 year vet.. pic.twitter.com/pKDSjRZogX

That ended up being a pretty fun game between two teams that are going nowhere.

11) 49ers (1-0): Unfortunately for the Niners, they can't play Jameis Winston every week. 256 yards of offense isn't going to cut it against better teams.

10) Falcons (0-1): Against the Vikings on Sunday, Matt Ryan went 33-for-46 for 304 yards, 2 TD, and 2 INT. That doesn't sound awful, but it definitely does not capture how poorly he played. Ryan was inaccurate early, with some forced throws, and this disaster in the third quarter:

The positive numbers that Ryan did put up were mostly in garbage time in the fourth quarter.

9) Panthers (0-1): Leading up to their Week 1 game against the Rams, the Panthers patted themselves on the back for surprising a 12-year-old kid who is saving money for college by mowing lawns, with, um, a lawn mower. Wooooo!

12-year-old Jaylin Clyburn started mowing lawns to save for college this summer.@Lowes and @RiverboatRonHC heard his story and got him all new equipment for his growing business 💙 pic.twitter.com/PmlcdiQXH8

I mean, it's a nice gesture and all, I guess, but do you really have to film that? If you're giving a kid a lawn mower, just give it to him and keep your social media team out of it. And if you're going to use this kid to promote the generosity of your organization along with that of a corporate partner's, at least maybe sweeten the deal a bit? Like, maybe just use your billions of dollars to pay for the kid's college, or at least throw in a weed whacker or something.

Anyway, the Panthers lost to the Rams.

8) Bears (0-1): Mitchell Trubisky was heavy criticized after an obviously bad performance, in which he was booed several times throughout the game. And frankly, it should have been worse!

"No INTs for Trubisky in the first half" pic.twitter.com/Yg90DsB9mO

Trubisky aside, Matt Nagy was just another in a long line of coaches who played like cowards this week. Faced with a 4th and 3 from the Packers' 41, down by four in the second quarter, Nagy punted! Lol.

Then later, in the third quarter, faced with a 4th and 10 from the Packers' 35, which should be a fairly obvious field goal situation for any NFL kicker, Nagy had some sort of kicker PTSD moment, and went for it, with Mitchell Trubisky easy being tackled on a scramble well short of the line to gain.

Also, just a thought here — Given the offensive production his team showed in the opener, I'm wondering if Nagy would have been better served worrying about something other than just his kicker this offseason.

7) Packers (1-0): Credit the Packers' defense for putting the clamps down on the Bears' woeful offense, but if I'm a Packers fan, I'm concerned about (a) the seeming lack of creativity from the offensive game plan, (b) the play of the offensive line, and (c) the ability of the skill position players to help Aaron Rodgers out.

6) Seahawks (1-0): The Seahawks were nearly double-digit favorites at home over the Bengals, and they needed a couple of Cincy fumbles and a missed field goal to pull out a narrow one-point win.

I did not watch this game (can't get to them all before Tuesday), but I'd say it's pretty safe to assume the Seahawks weren't very impressive Week 1.

5) Vikings (1-0): The Vikings and Falcons played sort of an odd game Week 1. The Vikings blocked a punt deep in Atlanta territory after the Falcons' first drive, scored on the ensuing possession, and then again on their next drive.

They had their comfortable lead, and then they just ran it all day. 38 rushes, 10 passes. It was Mike Zimmer's game from heaven.

While they won't be able to play that way every week, they did legitimately look good. Dalvin Cook looked great, and they have a rookie RB2 named Alexander Mattison, who went in Round 3 of the draft who looked good as well. I didn't know much about him coming out of college, but he can play. Minny's backs have always kinda stunk. They don't this year, and combined with that WR group, their offense could be really good if their OL is improved.

Of course, we won't know if their OL is improved until they're forced to throw the football.

4) Cowboys (1-0): As noted above, the Giants' defense was awful, which makes it easy to dismiss the Cowboys' win over them. However, Dak Prescott made a number of very good throws. If second-year receiver Michael Gallup (7-158-0 vs. NYG) can consistently perform anywhere near the level he did Week 1, that's going to be a difficult offense to stop.

2) Eagles (1-0): The grossness of the Eagles' alarming first half against Washington was offset somewhat by their dominance in the second half.

On the positive side, once they got clicking, Carson Wentz and the Eagles' offense looked like they could be very good this season. On the not so positive side, the pass rush was suspect, and the secondary allowed receivers to get wide open when the quarterback had time to throw.

There's a lot to be corrected before Week 2.

1) Saints (1-0): I assume you all saw it, but in what was easily the game of the week, the Saints withstood an extremely impressive performance by Deshaun Watson, and pulled out the win, breaking a string of five straight Week 1 losses.

Note to the rest of the NFL — If you have Drew Brees on the ropes, don't just concede a series of 10-15 yard throws down the field until they get into field goal range. He'll take that all day.