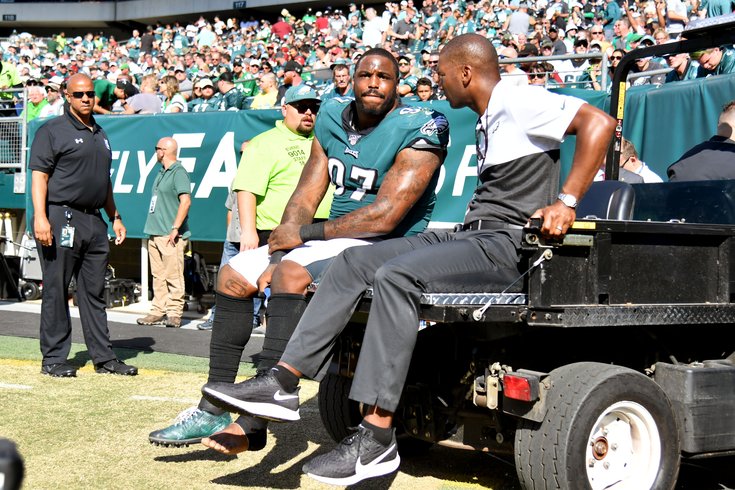 On the final defensive drive of the Philadelphia Eagles' win over Washington, defensive tackle Malik Jackson injured his lower left leg, and was carted to the locker room. After the game, he was wearing an air cast.

According to Doug Pederson, it is a significant injury.

"We're still waiting on a few more test results with him, but it's a significant injury that is going to require some time," Pederson said. Jackson could require surgery, which is the purpose for more testing, per Pederson. To be determined if it is season-ending.

The following is the play in which Jackson got injured. We'll get a better look when the NFL makes other video angles available on their GamePass feature:

Hard to see exactly what happened here (All-22/box version of GamePass isn't ready yet), but this is the play where Malik Jackson got hurt: pic.twitter.com/oTVEcNbdNW

After the play, Jackson hobbled off the field under his own power.

With Jackson out for a substantial amount of time, expect him to go on injured reserve. If he is able to play again this season, he will be eligible for return after eight weeks have passed.

With Jackson out, Timmy Jernigan would step into a starting role next to Fletcher Cox. Jernigan started at DT during the Eagles' Super Bowl run in 2017, but only played 45 snaps in 2018 while dealing with a back injury. In Week 1, Jernigan had the team's only sack. Hassan Ridgeway, formerly the No. 4 DT, will now be the first DT off the bench.

"I thought Jernigan was disruptive at times," Pederson said. "I thought Hassan got in there, especially late in the game when Malik came out, had a couple of pressure moments there.

"I thought both guys were disruptive, and Timmy in particular did some really nice things."