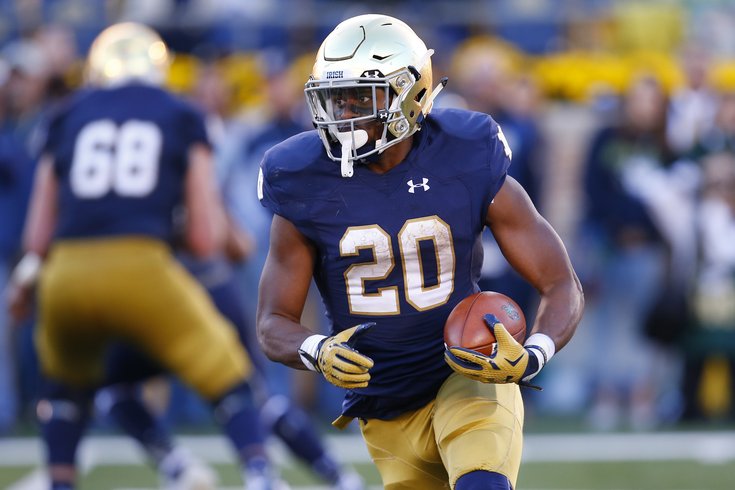 Notre Dame's C.J. Prosise could make sense as a draft-and-groom guy for the Eagles.

The televised portion of the NFL Combine won't begin until Friday of next week when running backs will be tested, but we'll start looking at players who will be competing there now.

Running back is a very under-the-radar position of need for the Eagles in the 2016 draft. Next offseason, the Eagles can move on from DeMarco Murray and save $4 million off their cap in 2017. Barring a monster comeback season from Murray, the Eagles will likely jump at that opportunity.

Meanwhile, Darren Sproles will turn 33 in June and Ryan Mathews is effective when healthy, but he's rarely in good health. The Eagles don't have an obvious immediate need for a new back, but there's a decent chance that Murray, Mathews and Sproles will all be gone in 2017.

The Eagles would be wise to draft and begin to groom a running back now. Here are five running backs competing at the 2016 Combine would might make sense.

Booker tore his meniscus this past season, but not before racking up 1261 rushing yards as Utah's workhorse back. Still, I don't love Booker's numbers over the last two years:

The concern for me would be his yards per carry. They look good compared to NFL runners, but in college, the top guys are typically hovering around 6.0 yards per carry or better.

Booker does a good job breaking tackles, and he is also a good pass-catcher out of the backfield, as he had 80 receptions the last two seasons at Utah.

One additional negative is that he turns 24 in May, which will turn teams off. If Booker falls to the middle rounds, I could see the Eagles having interest.

Dixon was really impressive during the week of Senior Bowl practices, especially as a receiver out of the backfield. He'll enter the NFL a more polished receiver than most of the running backs already collecting paychecks. Safeties and linebackers couldn't cover Dixon, and often looked silly trying. In some ways, Dixon reminds me a little of Jamaal Charles, who Doug Pederson coached in Kansas City. If Pederson's offense is anything like Andy Reid's, he'll want his running back to be a weapon in the passing game. Dixon can be that for the new regime.

As a runner, Dixon is tough and physical, as evidenced by his nose for the end zone. These TD numbers are ridiculous:

If Dixon somehow lasts until the third round (running backs have become undervalued), the Eagles should be all over him.

Drake was stuck behind Heisman Trophy winning Derrick Henry in 2015, and had to find other ways to get on the field. Alabama used Drake in a variety of ways, including as a running back, a slot receiver, a kick returner, and on coverage teams. He's probably not an every down back in the NFL, but he has some Brian Westbrook-like qualities to his game, in that he's versatile and tougher than you might expect.

In his three seasons at Bama, Drake averaged 12.4 yards per reception, which is excellent for a running back. If the Eagles were to draft Drake, they'd likely have to add another back to the stable in 2017, but Drake could serve as an added weapon on offense post-Murray/Mathews/Sproles.

We'll have to wait and see if Doug Pederson will want to have a fullback on his roster or not. If Pederson prefers an athletic, pass-catching, versatile type, then he already has a guy on his roster in Trey Burton who can fill that role. However, if he's looking for a big boy banger with size and thump, Hicks could be a player of interest in the late rounds.

Prosise was moved to wide receiver from safety early in his career at Notre Dame, before eventually landing at running back. Over the last two seasons, he racked up 55 catches for 824 yards, a 15 yards per catch average. Prosise has receiver skills, but not a lot of experience in the backfield, as he had just 166 career carries in college. However, he made the most of his time at RB, gaining 1158 yards (7.0 yards per carry), and 12 TDs.

As a player new to the position, the biggest concern teams will have with him will be in pass protection, which is a must have skill in a west coast type of system. Prosise would make a ton of sense as a mid-round guy the Eagles could develop for 2017 and beyond.