Eagles should stay away from free agent wide receivers 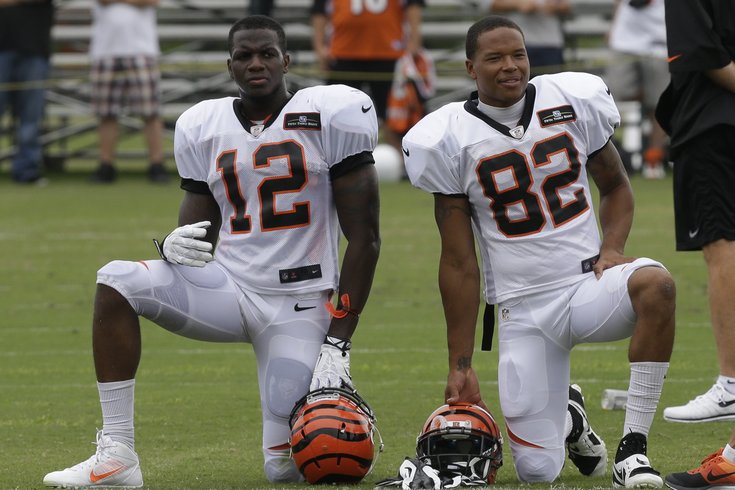 The Eagles should pass on free agent wide receivers like Mohamed Sanu and Marvin Jones.

The Eagles' wide receivers were bad in 2015. Yes, I know – this is a shocking revelation. As any avid Eagles fan knows, the Birds led the NFL in drops last season, and their young receivers were disappointing.

• Nelson Agholor was a popular preseason pick for Offensive Rookie of the Year, but he finished with 283 yards, and struggled with drops.

• Josh Huff did not progress in his second year in the league like many hoped he would, and wait for it... he struggled with drops.

• Riley Cooper blocked the living crap out of people (or so we were told), but was otherwise not much of a threat at all as an actual catcher of the football.

Cooper and Austin are gone, while special teams guy Seyi Ajirotutu is scheduled to become a free agent. While none of those three players will be significant losses, it does leave the cupboard bare. The only other remaining receivers on the roster not mentioned above are Jonathan Krause and practice squader Freddie Martino.

At a minimum, the Eagles need bodies. Evan Silva of NBC's Rotoworld lists the top 10 wide receiver free agents this offseason like so:

Jeffery, by far, is the best of the bunch, although there is a very good chance the Bears will franchise tag him. After Jeffery, there is a wide gap in talent.

Benjamin had a breakout season of sorts, leading Browns wide receivers with 966 yards in an offense devoid of weapons. That was by far the best year of his four-year career, as he had 314 yards in his next best season.

Jones was a nice number two option for Cincinnati, as he had 816 yards and four touchdowns for the Bengals, but was not an impact player.

Meanwhile, Boldin has had a stellar career, but he'll turn 36 during the 2016 season.

In short, the pickings are extraordinary slim. In 2015, the wide receiver market was similarly weak. The most attractive option was former Eagles receiver Jeremy Maclin, who received a five-year, $55 million deal from Kansas City. While Maclin's absence was felt hard by the Eagles, and his presence in KC boosted a Chiefs offense that got zero touchdowns from their receivers the previous year, Maclin's numbers actually dipped from 2014 to 2015:

That is not uncommon for free agent receivers switching teams. In fact, a year ago there were 12 receivers among the NFL's "Top 101 available free agents" (according to NFL.com) that switched teams. Ten of them saw their numbers decline from 2014 to 2015.

Of the receivers noted above, the only player who was a slam dunk "good buy" last offseason was Crabtree.

There are going to be receiver-needy teams who pay twos and threes like ones to play like fours. The Eagles should sit that nonsense out.

Agholor is 22, Matthews is 23, and Huff is 24. While all three have struggled in varying degrees, it would be premature to panic and write them off after that trio has combined for five seasons in the NFL. A more prudent approach could be to let other teams shell out big dollars the first few weeks of free agency, and then go bargain hunting once the dummies have overspent.