Day 4 NFL Combine preview: CBs to watch who could interest the Eagles 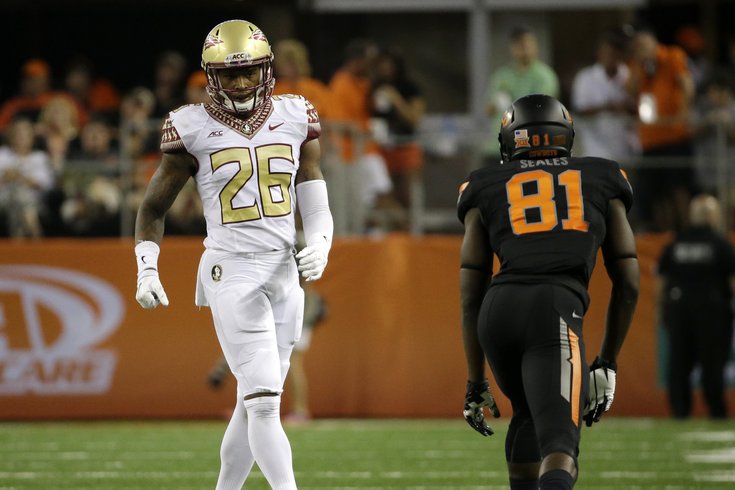 Florida State CB P.J. Williams could be an option for the Eagles in the first round.

INDIANAPOLIS -- Monday is the final day of workouts at the NFL Combine in Indy, where they'll finish up with the Eagles' two most obvious needs -- cornerback and safety. In case you missed any of our other positional Combine previews, you can find them at the bottom of this post:

• Alex Carter, CB, Stanford (6'0, 194): Carter's father is Tom Carter, who spent nine years in the NFL. Last year, the Eagles drafted Ed Reynolds, also a Stanford kid whose father played in the NFL. Carter has good size, and he's physical, but he has a lack of ball skills (two career INT). He could potentially move to safety in the NFL.

• Jalen Collins, CB, LSU (6'1, 203): Collins has excellent combination of size and speed, but only had 10 career starts at LSU. Collins is thought of as a raw player who could be a complete bust in the NFL if he doesn't improve the finer points of the position, but could be a star if he does.

• Quandre Diggs, CB, Texas (5'9, 196): The Eagles aren't drafting Diggs, because he's 5'9 and has 29 5/8 inch arms, but this little dude really grew on me at the Senior Bowl. He made plays on the ball all week, and stoned 230 pound Minnesota running back David Cobb cold at the goal line.

• Ifo Ekpre-Olomu, CB, Oregon (5'9, 192): Ekpre-Olomu is a very good corner who was at one time thought of as a first round pick, and many Eagles fans have mentioned him as a potential draft target because of his Oregon connection. However, this is an Oregon guy I don't think the Eagles will target because of his short stature, which as we all know (cough, Brandon Boykin), the Eagles don't like.

Ekpre-Olomu also tore his ACL in December, which would put his return to the football field somewhere around September. The only way I can see the Eagles drafting Ekpre-Olomu is if they view him as a slot corner only (or maybe even a safety?), and have determined that Boykin is not going to re-sign when his contract is up after the 2015 season. If the Eagles are OK with sacrificing some height for talent in the slot, then they could view Ekpre-Olomu as a player who can "start" in the slot in 2016.

• Ladarius Gunter, CB, Miami (6'1, 202): Gunter was a fourth round pick for the Eagles in my first mock draft of the offseason:

Gunter is a big, physical corner who will hit. He's 6'1 with 32 inch arms, has the demeanor the Eagles have looked for in their corners since Chip Kelly took over as head coach, and he moves better than expected for his size. At the Senior Bowl, there were several occasions in which wide receivers couldn't even get off the line of scrimmage, at all, with Gunter pressing them.

However... Gunter's weaknesses on NFL.com stood out:

WEAKNESSES: Unable to consistently mirror and match in man to man and shows some tightness when attempting to open up and run. Marginal play speed and appears to lack a second gear on tape. Has issues with awareness. Will lose track of his responsibility in man and zone coverage, and fails to find ball when playing with back to the ball.

That sounds an awful lot like the Eagles starting CBs in 2014.

• Kevin Johnson, CB, Wake Forest (6'0, 188): Johnson is a physical corner with good athleticism who will hit, but misses tackles. He's a late bloomer with room to grow, and could be a high pick. Johnson skipped the Senior Bowl, which is concerning.

• Byron Jones, CB, UConn (6'1, 199): Jones has great size and is thought to be a high character guy, which makes him a potential Eagles target.

• Marcus Peters, CB, Washington (6'0, 197): Peters may be the most talented corner in this class. BUT... Peters' weaknesses, via NFL.com, center around his questionable character:

WEAKNESSES: Suspended for one game in 2014 by head coach Chris Petersen for a sideline tantrum that followed personal foul penalty. Was ultimately dismissed from team over multiple run-ins with coaching staff. Inconsistent with footwork and loose with technique. Lacks patience in press and will open up early. Grabby off line of scrimmage and downfield when beaten. Average mirror-and-match and long speed. Overly emotional and prone to mental mistakes because of it. Slower than expected to squeeze routes in space. Doesn't take coaching.

Those "run-ins" with the Washington coaching staff apparently include Peters doing his best Latrell Sprewell imitation:

"He tried to strangle a coach on the sidelines," one scout said. "Then they let him back on the team and he did it all over again. Try selling that to your head coach."

I just can't see Chip Kelly being interested, because, you know, #culture.

• Quinten Rollins, CB, Miami Ohio (5'11, 195): Rollins was among the players who impressed at the Senior Bowl:

Rollins is a playmaker. During the week of practices, he showed a knack for locating the ball in the air and making plays on it, something Philly fans rarely saw from Eagles starting corners in 2014. In the Senior Bowl game itself, he made a very nice over the shoulder interception. Rollins was a star basketball player at Miami (OH) for four years, and didn't play footbal until his senior year, when he had seven interceptions. He has an enormous ceiling. To be determined if 5'11 is too short for the Eagles' liking.

In addition to being sub-six foot, Rollins has short, 30 1/4 inch arms, which could turn off the Eagles.

• Trae Waynes, CB, Michigan State (6'0, 186): Waynes has good enough size (although he looks really skinny), and he is a great cover corner. He could be the first CB drafted this year, and would be an obvious player of interest to the Eagles if he somehow fell to 20.

• P.J. Williams, CB, Florida State (6'0, 194): Williams is another likely first round pick, and could be a Eagles target because of his size, speed, physical nature (he might be too physical, actually) and willingness to tackle in the run game.