Do you really need an expensive elite QB to win in the NFL? Or is it better to be cheap? 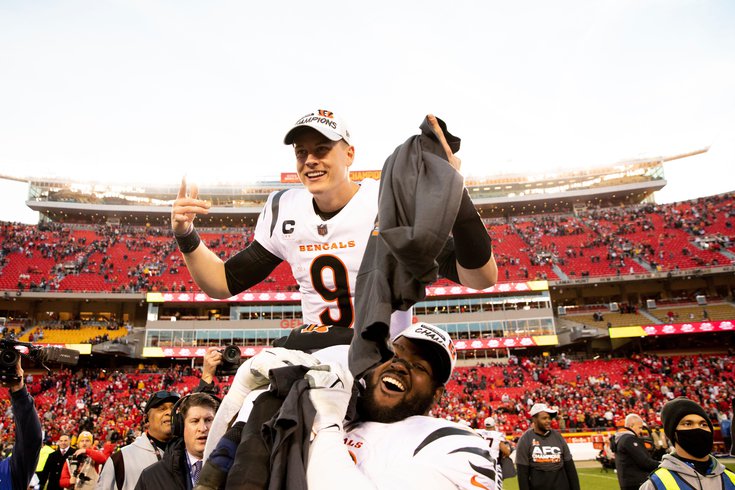 After what was without a doubt the most epic weekend of divisional playoff games in NFL history, there were some pretty definitive statements being made on Twitter and the NFL talk shows about what it takes to make it to a Super Bowl.

They all said you need an elite QB.

Incredible performances from Patrick Mahomes and Josh Allen made it seem like either the Chiefs or Bills would be representing the AFC in the big game for the next decade. But a week later, the NFL is playing a different tune.

Mahomes was beaten by Joe Burrow and the Bengals — a QB who could very soon be considered elite. The NFC will be represented by Matthew Stafford, who needed a last-second field goal to beat Jimmy Garoppolo and the defensive-minded 49ers.

Burrow and Stafford are good. Very good, even. But they aren't elite. And one of them will lift the Lombardi trophy on February 13.

This has to intrigue teams like the Eagles — who have a quarterback who has the chance of being a top 12 guy some day, but likely never an elite, top 5 guy.

Let's first define elite. It's kind of one of those know-it-when-you-see-it monikers. In 2021, Tom Brady, Aaron Rodgers, Mahomes and Allen probably round out the slew of top tier signal-callers this season. It seems like the second tier — a group that includes Stafford, Burrow, Justin Herbert, Lamar Jackson, Kyler Murray, Derek Carr and Russell Wilson might really be the sweet spot for NFL contenders.

Finding a QB that slots in there as a top 10 or 12 guy is easier to find and perhaps cheaper than getting one of the rare elite. And it seems like history supports this. Here's a look at the last 10 Super Bowl QBs and their rank amongst fellow QBs in that season (using ESPN's total QBR):

*The year Foles won the Super Bowl, Carson Wentz was No. 1 in QBR through 13 games
**Kaepernick did not qualify, but was 7th in his seven starts that season

Yes, we know there is no flawless way to quantify a QB as elite, so we did our best using a metric that makes sense and is simple. As you will no doubt notice, in addition to Mahomes (twice), Brady (three times), and Manning, just twice in the NFC has a quarterback ranking in the top five taken his team to the Super Bowl.

The bolded names above are quarterbacks on their rookie contracts — an edge that is huge for a team trying to build a roster. It's much harder to put together a competitive, Super Bowl-caliber team when your quarterback has a $46 million cap hit, like Mahomes will in 2023. It's another reason why the Bills overtime loss was so devastating. Allen's six-year, $258 million contract kicks in this coming fall. We've included Nick Foles' Super Bowl run with the Eagles because he not only was a cheap backup, but their regular starter that year, Wentz, was on his rookie deal, therefore giving Philadelphia the same salary cap advantage that season.

In all, 10 out of 13 non-Brady/Manning Super Bowl appearances over the last decade have been made by signal-callers on their rookie deal. And every year but one (2017) featured at least one QB on a rookie deal.

So is it more important to go shopping for the most elite QB available, like the Broncos or Bucs (if Brady does retire) may be doing this coming offseason with Wilson and Rodgers potentially on the move? Or is it more important to have a cost-controlled option who allows a front office to boost what it spends on defense and skill players?

The numbers would suggest that a team taking a chance on Kenny Pickett, Desmond Ridder, Matt Corral or another available QB in what is being considered a weak draft class would have a better chance at making a run at a title than, say, a team that sends draft picks and uses cap space to bring in an elite or near elite veteran.

It also kind of suggests that a team might not be crazy to spurn giving a quarterback an extension after five seasons if they are anything less than Allen or Mahomes. Just look at what happened to Carson Wentz — and the Eagles cap situation — after the QB signed his lucrative second deal.

Teams with players like Herbert, Murray and Burrow are at a huge advantage right now. And teams with borderline young quarterbacks, like the Eagles with Hurts or the Patriots with Mac Jones, should be focused on how they can win during their brief cheap salary window.

Getting an elite quarterback is ridiculously rare in the NFL, and it is kind of preposterous for teams to be building rosters while thinking they are one of those away. They are hard to find.

This postseason proved that Mahomes, Allen, Rodgers and even Brady are beatable. Whether these elite QBs beat themselves, were not coached properly or were outplayed by opposing defenses, there is a road map to get to the promised land without an NFL MVP under center.