John McMullen: Nick Sirianni has to be prepared to fill in the blanks

The Eagles coaching staff, even with Sirianni in place, will likely be a revolving door for years to come. 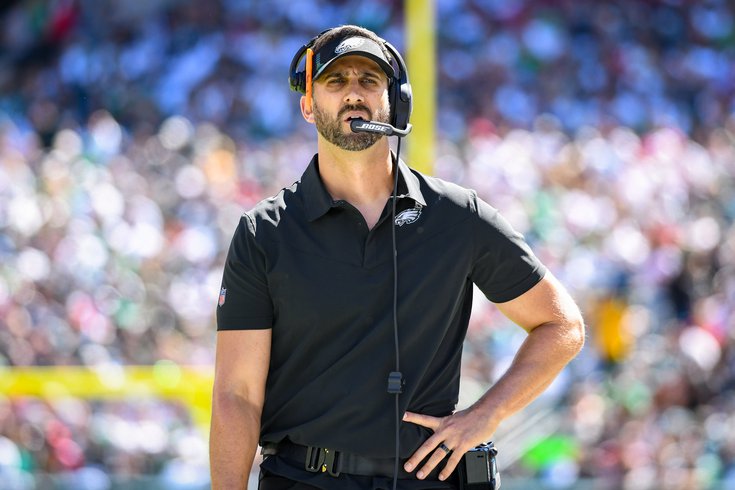 When Sean Payton called it a career – for now – in New Orleans, it cemented that nearly 30% of the NFL would be looking for new head coaches in the 2022 hiring cycle with Denver and Chicago the first to dive into the pool with the Broncos tabbing former Green Bay offensive coordinator Nathaniel Hackett and the Bears going to former Indy defensive coordinator Matt Eberflus.

From there the New York Giants went with Brian Daboll as expected, the natural progression after taking new GM Joe Schoen from Buffalo as well, and the Raiders morphed into the spin-off of New England Sin City by hiring Dave Ziegler as GM and honing in on Josh McDaniels as head coach.

McDaniels incidentally would be in Philadelphia right now if Jeffrey Lurie signed off him during last year’s coaching carousel which ultimately ended with Nick Sirianni as the Eagles’ on-field leader.

The other jobs are starting to come into focus as well with the awfully-run Jaguars still trying to leverage Byron Leftwich, Houston attempting to man up and show the courage of its convictions with either former Eagles backup quarterback Josh McCown or current Philly defensive coordinator Jonathan Gannon.

From there it’s Minnesota honing in on a couple of Championship Sunday combatants: Rams OC Kevin O’Connell and 49ers DC DeMeco Ryans, the former Eagles’ linebacker, or Michigan coach Jim Harbaugh as the wild card. Miami is sniffing around Niners run-game coordinator Mike McDaniel and the Saints are likely stealing away Leftwich from the Jags or staying in-house with Dennis Allen.

While the process as a whole is taking longer this year due to societal concerns over minority hiring in the league (and the league is 0-for-4 on that front to date) the early decisions have held true for the most part to the pendulum effect that has been NFL doctrine for decades.

The defensive guy “fails” in Denver (Vic Fangio) and you go to the “offensive mastermind” in Hackett. That’s where you insert the joke ‘Is Aaron Rodgers coming with Hackett?’ but at least that scenario holds some water early in the offseason game.

In the Windy City, the offensive-minded Andy Reid acolyte (Matt Nagy) was done in by the incompetence of his general manager (Ryan Pace) selecting Mitchell Trubiskly before Deshaun Watson and Patrick Mahomes. They’ve both been replaced with Nagy’s successor being the Frank Reich-minted Eberflus, who had to find an OC to unlock the gifts of second-year QB Justin Fields.

The Giants went away from the tough-guy routine of Joe Judge for Josh Allen’s “QB whisperer” in a last-ditch effort to save a sunken cost in Daniel Jones while the Raiders were an outlier because it was scandal that forced Jon Gruden out in the first place and interim coach Rich Bisaccia was never getting a fair shake.

For Eagles fans, none of the shuffling deck chairs is of much interest unless their favorite team is involved like last year when Lurie somehow found the best of the rookie lot in Sirianni despite starting late and missing out on what I’ve dubbed the “Hansel” candidates, a reference “Zoolander” devotees will understand.

The Philly faithful should be interested, however, and likely are now that former co-director of player personnel Ian Cummingham was pilfered to become the assistant GM to Ryan Poles in Chicago.

The Packers’ offensive coaching staff is getting picked apart after three consecutive 13-win seasons and Green Bay came sniffing around Eagles’ QB coach Brian Johnson before settling on an in-house promotion for OL coach Adam Stenavich. Hackett also wanted Stenavich in Denver but he will be calling plays so Green Bay was able to block that plan.

And remember five new head coaches are still to be named and they will all have to populate their staffs from there at a time where you can no longer block assistants under contract from interviewing for offensive or defensive coordinator positions when play-calling power is in the mix.

The movement in an already nomadic profession is set to be historic.

In other words, Sirianni’s 2021 coaching staff isn’t going to look the same in 2022 even if Lurie didn’t demand any scapegoating for a poor performance in Tampa.

Much was made about how young Sirianni’s coaching staff was when it was first cobbled together but, as usual, the Eagles were ahead of the curve when it comes to what the NFL is looking for: smart young minds.

And that’s great but the curve exits and while others might be behind it they are starting to arrive even if the brake lights are on for the entire journey. Gannon is 39, Patullo is 40 and Johnson is only 34.

Whoever stays or whoever goes remains to be seen but Sirianni’s ultimate success as a head coach in this league will be tied directly to his ability to fill in the blanks each year.

If you have any success in the NFL, your neighbors are breaking the commandment and coveting everything.

That reality has only been sped up and if 9-9 is deemed a success rather than mediocrity, imagine what double-digit wins in the future will produce.

Sirianni has to be ready for it.