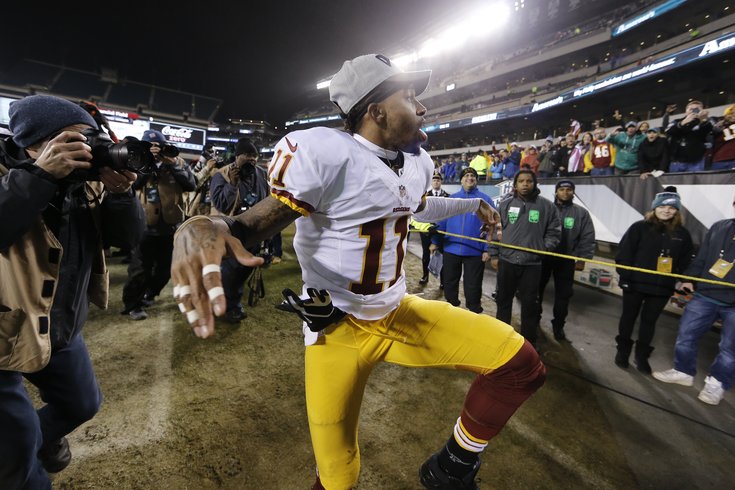 DeSean danced on the Eagles' grave last Saturday, figuratively speaking of course. To be clear, nobody literally buried the Eagles in the ground, with DeSean dancing on top of that burial site.

Week 16 of the NFL season is in the books, and the playoff teams are set. Representing the NFC will be the NFC South-winning Panthers, NFC West-winning Cardinals, and the NFC East-winning Redskins. The NFC North will be won by either the Packers or Vikings, but both teams have at least clinched a playoff berth, and the Seahawks are in as a wildcard.

The Eagles effectively ended both their season and the Giants' by losing to the Skins last Saturday. Here's our final Hierarchy/Obituary of the 2015 NFL season:

I'll keep this short and sweet. At varying points during this season, the Eagles couldn't throw, catch, block, kick, tackle, cover, or coach. There were times when they figured out how to do a few of those things, but they never at any point were able to come close to putting it all together. As they said all season, "We just shot ourselves in the foot."

Because that's what bad teams do. Because the Eagles are bad football team.

Paul Schwartz of the NY Post recounted all the Giants' end-of-game nightmares this season in which they blew seemingly insurmountable fourth quarter leads:

In the season opener, the Giants had a 23-13 lead with less than eight minutes remaining in Arlington, Texas, against the Cowboys. It was a 20-10 lead with 12:50 left against the Falcons. Who can forget the 49-42 lead with 1:20 remaining the Giants in New Orleans? There was a 23-17 lead on the then-unbeaten Patriots entering the fourth quarter and a 26-24 lead with 1:47 to go. Most recently, the Giants were ahead of the Jets 20-10 when coach Tom Coughlin eschewed a chip-shot field goal with 8:50 remaining.

According to advanced metrics, the Giants when leading by 10 late in the fourth quarter had a 98.9 percent win probability to beat the Cowboys. It was 97.6 percent against the Falcons, 96.4 against the Saints. When Jets cornerback Buster Skrine was called for pass interference with 10:54 remaining, the Giants, leading by 10 points and with a first down on the Jets’ 12-yard line, had a win probability of 99.4 percent, according to Pro Football Reference. In other words, the Jets had virtually no statistical chance to win the game. But they did.

The Giants brought a lot of that on themselves with stupidity. The Cowboys game was the biggest debacle. Eli Manning lost his freaking mind when he told Rashad Jennings not to score against Dallas, which would have given the Giants a two-score lead. Then later on that set of downs, with the Cowboys having no timeouts remaining, the Giants opted to try to pass instead of just running clock, kicking a field goal, and leaving Dallas with virtually no time to go down and score a TD to force overtime. Instead, Eli dropped back, didn't have anyone open, and instead of just laying down, he threw an incomplete pass, stopping the clock. That left just enough time to play terrible defense and give up their lead.

After surviving so many previous offseason hot seats, Tom Coughlin's tenure is probably over in New York. This will be a new team going forward.

Every single team the Redskins beat this season currently has a losing record. They lost to a 4-11 team (Cowboys), a 5-10 team (Dolphins), and a 6-9 team (Giants). When they played teams with winning records, they were 0-4 with a combined score of 130-65.

It feels a little bit like Adrian Peterson's season is going under the radar. Or am I off base there? Anyway, Peterson is probably going to win his third rushing title, and as usual, he is by far the biggest reason for any success the Vikings have.

On the season, he has carried the ball 308 times for 1418 yards (4.6 per carry) and 10 TDs. Opposing defenses know where it's going, and he dominates anyway.

The Packers are limping to the finish after getting waxed in Arizona by the Cardinals. After starting 6-0, the Packers have gone 4-5 down the stretch, and do not look like a Super Bowl contender at all. They have Aaron Rodgers, which is a great start, but otherwise, this just isn't a great team.

Of the four teams who have to play the first round of the playoffs (Seahawks - Packers - Vikings - Redskins), the Seahawks are clearly the class of that group. By a mile. Whoever gets the 1 seed is going to be praying their first playoff game isn't against this team.

The Panthers finally lost, and I'm not sure I buy the whole "They got a loss out of their system" stuff. This is a really good team, but it's imperative that they win their season finale against the Bucs to secure home-field advantage throughout the playoffs. Otherwise, they'll be heading into the playoffs on a major low.