For the record, the Eagles didn't 'rebuild' last offseason 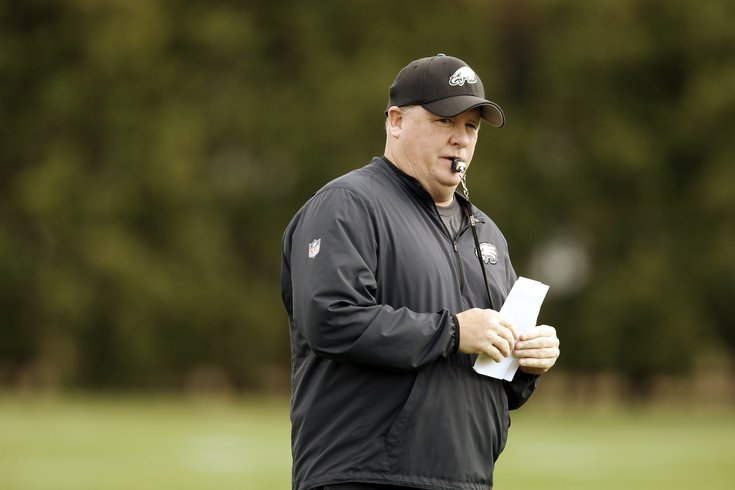 If by "rebuiding," you mean the Eagles got older and worse, then yes.

In sports, when you talk about "rebuilding," usually what comes to mind, for me anyway, is transitioning from aging veterans to younger players with promise. When it comes to the discussion of the first Chip Kelly piloted Eagles offseason, Kelly doesn't have many defenders. However, the ones who do defend him have made the argument that he "rebuilt" the team in his vision, and should have time to see positive results.

Kelly in no way, shape or form "rebuilt" the roster with distant future success in mind. He built it to win immediately. And failed. Badly. In the process, the Eagles got older and worse.

In fact, since Kelly became the Eagles' head coach, they have gotten progressively older every season. Here are the Eagles' average ages after 53 man cutdowns each of the last four seasons, with their NFL rank in parentheses:

Let's take a look at what Kelly did at each position on his offense:

Quarterback: Obviously, Kelly traded a second-round pick (future youth) and Nick Foles to the Rams for Sam Bradford. This was Bradford's sixth year in the NFL. The Eagles were looking to get better immediately by making that deal.

Additionally, Matt Barkley is the only quarterback the Eagles have drafted during the Kelly regime. He was traded to the Cardinals for a seventh-round pick just before the season. There has never really been much of an emphasis on grooming a quarterback to grow in Kelly's system.

Running back: The Eagles traded LeSean McCoy primarily to free up cap space. In the process, they also received a young linebacker with promise in Kiko Alonso, who ultimately did not pan out. The idea for that trade was fine. But then they blew the cap space they saved on McCoy by signing DeMarco Murray to a five-year deal worth $40 million.

Because of the way that deal was structured, Kelly could point to the fact that Murray only counted for $5 million against the cap in 2015, which was far less than what they were on the hook for with McCoy in 2015. That was wildly misleading. Murray, who is actually four months older than McCoy, will count for $8 million against the cap in 2016, and it accelerates from there. For now, he is essentially uncuttable.

Kelly most certainly was not thinking of the future when he signed Murray. He saw it as an immediate savings, never mentioning that his cap hit ballooned after his first year with the team.

Wide receiver: When the Eagles decided the deal Jeremy Maclin was offered by the Chiefs was too rich for their blood, they didn't have much of a backup plan at wide receiver. They signed the ancient Miles Austin (!) to an absurdly senseless deal, and may have been swayed to draft Nelson Agholor with the 20th-overall pick to compensate for the loss of Maclin.

The Eagles felt that money was better suited going to players like Bradford, or Byron Maxwell. Meanwhile, Agholor, a player who was thought of as a "pro-ready" prospect, cost the Eagles a premium resource that could have gone to another position, and was a clear (and monumental) downgrade from Maclin.

Offensive line: The Eagles cut Todd Herremans and Evan Mathis, two aging vets, but they did not go in that direction to get younger. They cut Herremans because he was no longer an effective player, and Kelly's reasoning that Mathis was released because he didn't want to be in Philly in no way whatsoever holds water. Mathis was let go because of a petty urinating contest, period.

Mathis and Herremans were replaced in the starting lineup by Allen Barbre (31-years old) and Andrew Gardner (29). Over the last two years, the Eagles are the only team in the NFL not to have drafted an offensive lineman. In no way have the Eagles done a good job beginning to replace the oldest offensive line in the NFL.

Kelly's offense stunk this season. Heading into their game against the Redskins, the Eagles were 26th in yards per drive, 24th in points per drive, and 28th in turnovers per drive.

This was not a "rebuild." It was a reallocation of resources to (on the whole) less talented and older players, AKA an "Amaro Jr."