Five reasons the Eagles were eliminated from playoff contention vs. Washington 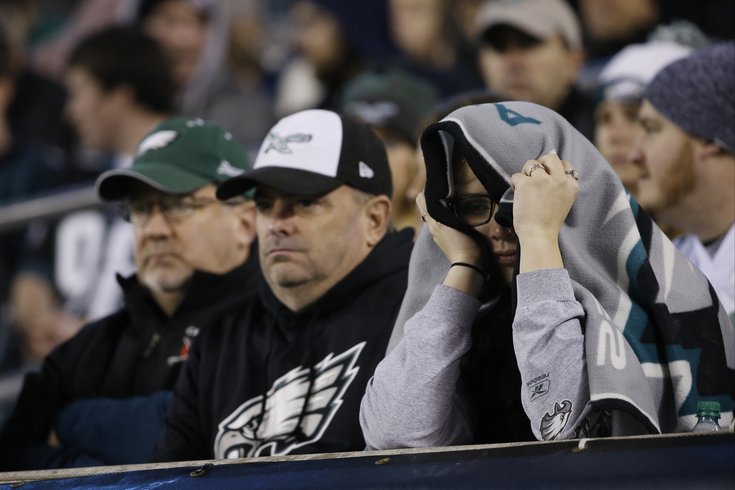 This is what it looks like when you team's season comes to an end...

It's official – the Philadelphia Eagles season will come to an end next week after their regular-season finale against the New York Giants. But for many fans, the season came to an end midway through the fourth quarter of their 38-24 loss to Washington on Saturday night.

At least that's what it looked like based on the amount of fans who didn't bother to stick around until the end of their team's last home game. With the loss, Chip Kelly and Co. were eliminated from playoff contention as DeSean Jackson and his Washington teammates celebrated their NFC East title on field he used to call home.

It was a game that played out as a metaphor for the Eagles season. There were drops, missed tackles, turnovers, penalties and pretty much everything you've come to expect from the Birds this season.

Here are five reasons -- although there were certainly more -- the Eagles won't be playing anymore meaningful games:

As Rich Hofmann pointed out in his weekly prediction, Washington quarterback Kirk Cousins has been two completely different players this season, depending on where the game is played.

Against the Eagles on Saturday night, however, Cousins played like it was home game -- even a little better. He finished 31-of-46 for 365 yards and four touchdowns (120.3 passer rating). And aside from his brain cramp at the end of the first half, he played one hell of a game.

Part of the reason for Cousins' success against the Eagles was the fact that he was facing a secondary that has been pieced together following injuries to both starting cornerbacks. The bigger reason, however, was that the fourth-year QB had more than enough time to throw. It's amazing what a quarterback can do when his offensive line actually wins the battle in the trenches.

No help for Bradford

Sam Bradford didn't get much help from his skill players. Zach Ertz fumbled. So did DeMarco Murray -- although it was technically credited to Bradford on the pitch play. Riley Cooper dropped a pass that negated a big gain. Nelson Agholor dropped a touchdown.

And there are plenty more that I'm missing.

Bradford had his share of mistakes -- like his three fumbles or when he overthrew a WIDE OPEN Ertz for a potential TD -- but overall he didn't play too poorly, especially when you consider that he was sacked five times and under pressure much of the game.

The Eagles turned the ball over twice, one of which resulted in a defensive touchdown for Washington and all but sealed the game. That's the fifth time in the last seven games the Eagles defense has failed to create a turnover and have just four total in that stretch. Not surprisingly, they are 0-5 in those games. Through their first eight games, the Eagles forced 19 takeaways, which was the best in the league at the time.

The Eagles finished with just 45 rushing yards, their second lowest output of the season. Surprisingly enough, DeMarco Murray led the team with 27 yards on five carries. His five carries tied him with Darren Sproles for a team high, and he even got in the end zone for the first time since the Eagles' Week 9 win over the Cowboys.

Ryan Mathews also scored -- on the first possession of the game -- but finished with just four carries for five yards and failed to record a carry after the midway point of the second quarter. Sproles finished with five carries for nine yards.

Murray, Sproles and Mathews did, however, combine for 12 catches for 93 yards, but the Birds really failed to ever establish anything on the ground.

Not who you thought...

It wasn't former Eagle DeSean Jackson who doomed the Birds on Saturday night. Instead, it was TE Jordan Reed, who caught a team-high nine passes for 129 yards and a pair of first quarter touchdowns. Jackson was largely quiet throughout the game, at least in terms of on-field production.

He finished with four catches for 40 yards. His fellow wideout, Pierre Garcon, finished with seven catches for 80 yards and a touchdown. In fact, 208 of Cousins' 365 passing yards -- and three of his four TDs -- came on throws to running backs and tight ends, which only served as yet another lesson in how poorly the linebackers have been playing this season.

The Eagles aren't that good and never deserved a chance -- let alone what's felt like an endless parade of second chances -- to win the division in the first place.

Hey, at least the Sixers won their second game of the season. When do pitchers and catchers report again?