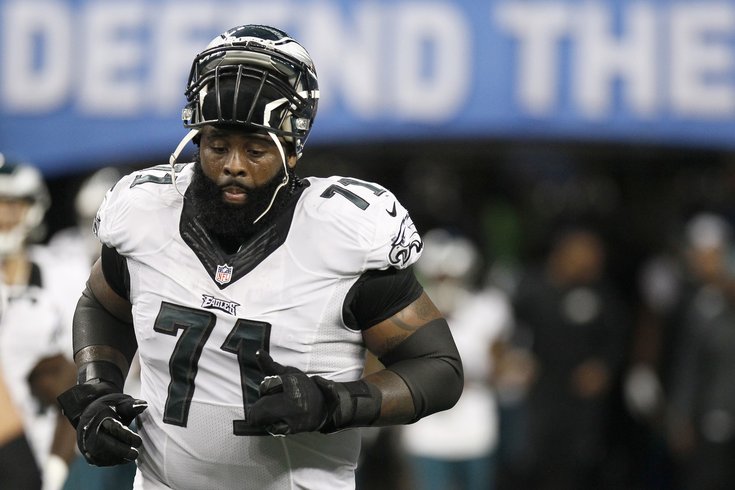 The Eagles' meaningless Week 17 matchup against the Giants may be Jason Peters' last in an Eagles uniform.

There's always next year. Or 2020. Or 2050. With the Eagles' 2015 over after yet another embarrassing loss at the hands of the Washington Redskins Saturday night, let's take an initial look at the Eagles' five biggest offseason needs, with some players I like at each position in the draft. You can click on each name for deeper analysis of each draft-eligible player:

Ideally, the Eagles could have found an offensive tackle worthy of drafting last year who they could have groomed to eventually take over for Jason Peters. Now, they may be forced to plug and play one next season. As we wrote earlier this month, there's a good chance Jason Peters' career with the Eagles is over:

Peters turns 34 in January and is currently the third-oldest offensive lineman in the NFL. While Peters has had a tremendous career and is a borderline Hall of Fame talent, his career is clearly in decline and he has experienced multiple injuries of the "nagging" variety this season. In 2016, he'll count for $9,300,000, of which the Eagles can save $6,300,000 by releasing or trading him. If the Eagles are realistic about their Super Bowl aspirations next season (they shouldn't have any), they could try to find a trade partner that is a legitimate contender in need of a tackle. They wouldn't get a ton for him, but with a large number of holes to fill, every lottery ticket counts.

The Eagles need a tackle to replace Peters, whether they draft a guy to simply fill in at LT, or if they find someone to play RT, with Lane Johnson moving over to Peters' old spot.

• Laremy Tunsil, Ole Miss: Big and athletic, Tunsil is likely a top-10 pick, maybe top 5. The Eagles will have to be comfortable with his character and a broken fibula he suffered in Ole Miss' bowl game last season. He would likely fill in at LT with the Eagles, with Lane Johnson staying right where he is.

• Ronnie Stanley, Notre Dame: Again, big and athletic, and a powerful run blocker. Again, Stanley could be a top 10 pick, and would fill in directly at LT with the Eagles.

• Taylor Decker, Ohio State: In the run game he moves people, and in the passing game, he does a great keeping himself in between the pass rusher and his quarterback. Decker played RT for Ohio State as a sophomore and moved to LT last season. With Jason Peters' career winding down, Decker could follow in the footsteps of Lane Johnson, who played both RT and LT at Oklahoma. First round projection.

• Jason Spriggs, Indiana: Extremely athletic tackle who is expected to test very well at the Combine. Probably a second round pick, for now, although he could be a riser. Unfortunately, the Eagles don't have a second-round pick.

• Parker Ehinger, Cincinnati: Played LT and RG at Cincy. At left tackle, he looks like a natural. This is a big boy who carries his height and weight well, looking not just coordinated, but athletic. And in addition to his impressive height-weight combination, he has long, powerful arms that keep opposing pass rushers at bay. In the run game, he is capable of moving defenders against their will. I like his fit at RT with the Eagles. On CBS Sports' draft prospect list, Ehinger is somehow listed as the 168th best prospect overall, and the 10th best guard. I don't agree with that at all. I think he's a second or third round pick.

What the Eagles decide to do with Sam Bradford this offseason will be a hotly debated issue this offseason. Whether or not the Eagles re-sign Bradford, one thing feels very clear -- The Eagles need to find a way to get a quarterback in the 2016 NFL Draft to begin to groom as a long-term answer if Bradford does not pan out.

We'll continue to review quarterbacks as we head into the offseason.

Connor Barwin is very good at what he does, playing the "Jack" role in the Eagles defense. He plays the run, he can rush the passer, and he can cover, but he's not special at any one thing. On the other side, Brandon Graham has made himself into a more-complete OLB in a 3-4, and is the Eagles' best threat on the edge, although certainly not among the league's best at getting to the QB.

The Eagles completely lack depth here, and with DE Vinny Curry possibly bolting in free agency this offseason, the Eagles need to bring in more guys who can disrupt the opposition's passing game. The Eagles have allowed 34 passing touchdowns this season, which is second-worst in the NFL. That's not all on the secondary. The Eagles' inability to affect the quarterback has factored in heavily, and the Birds have often lacked a strong presence on the edge.

• Jordan Jenkins, Georgia: Jenkins is in the same mold as Barwin, in that he can rush the passer, play the run, and cover. However, he has never put up monster sack numbers. I'd be OK with him in the third.

As we all know, the Eagles cut Todd Herremans (no problem with that) and Evan Mathis (big problem with that) last offseason despite not having adequate starting material at guard to replace them. That blew up in their faces. The Eagles have drafted no offensive linemen the last two years, and just one in the last three. That was the fewest in the NFL over both time spans.

The Eagles primarily need starters at guard or at least depth in the form of players who can play all three of the interior OL spots from the bench.

• Christian Westerman, Arizona State: Westerman is a former bigtime high school recruit (27th in the country by Rivals.com), who is an athletic freak. He should be of clear interest to the Eagles.

• Cody Whitehair, Kansas State: Whitehair has positional versatility, which is something the Eagles highly value. He played RT, was moved to LG, then back to RT, and finally he has found a home at LT. At just 6'4, he'll probably have to move back inside to guard at the pro level but will have experience on the edge in a pinch.

• Landon Turner, North Carolina: While Turner doesn't have a lot of OL versatility like the Eagles prefer, he does have an attribute that the Eagles don't currently have along the interior of their offensive line -- Turner can move defenders against their will.

• Joshua Garnett, Stanford: Garnett is a mid-late round prospect, who has well over 40 games of experience playing for Stanford at guard. Garnett is not the most athletic guy (hence his status as a likely mid-late round pick), but when he gets to the second level he looks to put defenders on the ground.

• Isaac Seumalo, C/OG/OT, Oregon State: Seumalo is a unique player who can play all five spots along the offensive line, which will absolutely appeal to the Eagles, who, again, place a high premium on OL versatility.

Honestly, I really struggled to pick the fifth biggest need, as the Eagles have no shortage of gaping holes. If you think it's wide receiver, for example, you will not hear an argument from me. Personally, I think the Eagles have still not yet fixed their issues in the secondary.

The Eagles had little choice but to overspend on a corner in free agency last offseason, and Byron Maxwell predictably did not live up to his pay scale. I see a need here both in the short term and long term.

In the short term, the Eagles are currently running guys like Ed Reynolds and Chris Maragos onto the field in nickel looks. That's not good. An additional corner, preferably once with inside/outside versatility, would give the Eagles more numbers on the back end.

In the long term, the Eagles are going to want to get out of Maxwell's contract whenever it's financially realistic. Ideally, they can have someone in place to take over on the outside whenever that's possible.

• Kendall Fuller, Virginia Tech: In the 2014 NFL Draft, the Eagles had targeted six players that they hoped would fall to them in the first round, one of whom was VT's Kyle Fuller, who was drafted 14th overall by the Bears. Kendall Fuller might be even better than his brother Kyle. They have similar styles of play in that they're both physical corners, who are also sticky and make plays.

• Maurice Canady, Virginia: At 6'1, Canady has the length to play on the outside, but he has also been used in the slot.

• Jeremy Cash, CB/S, Duke: Technically, Cash is a safety, but he is a player who will almost certainly interest the Eagles due to his ability to drop down close to the line of scrimmage to cover slot receivers. In the games I watched of him, he played a nickel CB role more than he did as a deep safety. Additionally, he has excellent size at 6'1, 208, and is a tough run defender.

• Jalen Ramsey, Florida State: Clearly, Ramsey is a player the Eagles would covet. At Florida State, he has played a myriad of roles, from corner to safety to linebacker to special teams stud. He's fast. He's aggressive. He's physical. He can cover. He can hit. He can rush the passer. And he's awesome on special teams. Incredible football player. Potential top 5 pick.

• William Jackson III, Houston: Of the 31 cornerbacks that were selected in the 2015 NFL Draft, the three corners the Eagles drafted all landed among the top six players in pass breakups the last two years, including the No. 1 overall player, sixth-round pick JaCorey Shepherd, who had 28. Jackson fits the profile of a player with outstanding ball skills, as he had 10 pass breakups in 2014, and he already has 21 in 2015. Jackson is a PBU machine, and he also has three interceptions this season, two of which he returned for pick-sixes.