NFL Week 11 betting advice: Take the Eagles and the points against the Patriots 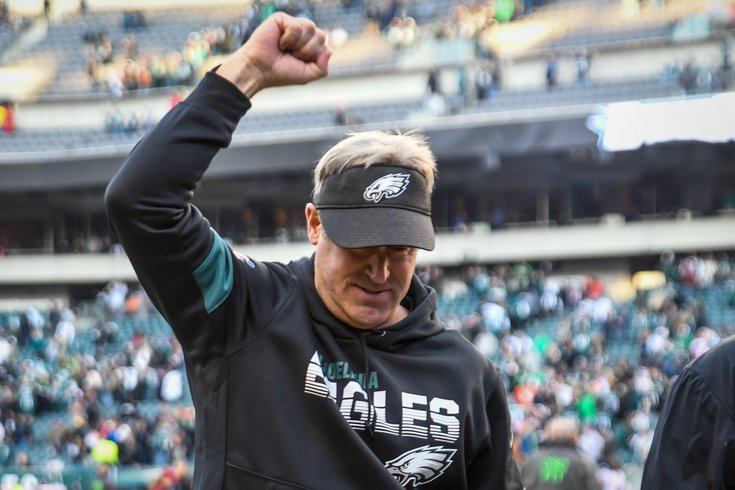 What is the line telling you: The soft opener offshore had the Patriots laying 3 with the combined total set at 46, and it didn't take long for the market to move off that key number of 3 as some money entered the market on the world champion Patriots. We've also witnessed the total kissed down from 46 to 45 on your screen. We think a lot of New England’s metrics on defense were skewed due to the opponents they faced earlier in the year, and don't really warrant being ranked No. 1 in overall defensive efficiency. Then, add the Eagles problem against the pass, ranked 20th in the NFL in opponent yards-per-pass attempt, and the Patriots averaging more than 29 points per game on the road, and Philly a little over 27 at home this game should easily fly over the total of 45.

Bottom line: Bet the total over 45. We didn't bet a side in this one yet, but we’re leaning towards the Eagles. The ticket count is heavily tilted on the Patriots as over 80-percent of the bets placed so far in Vegas and offshore are on Bill Belichick’s team. Then, if we look at each team’s schedule, Philly does have quality wins on the road against the Packers and Bills, while the Patriots really haven't beaten anyone all year, other than sneaking by Buffalo 16-10. We’re hoping this line keeps rising and we can grab some plus-4s on the Eagles by game time for small coin.

MORE: Rounding up the experts' predictions for Eagles vs. Patriots | Eagles RB injury carnage: Sproles to IR, Howard not yet cleared for contact | Former Eagles RB Jay Ajayi visiting the team in Philadelphia

What is the line telling you: Oddsmakers and offshore opened this line with the 5-4 Colts a small 3.5-point favorites over the 4-5 Jags, with the combined total set at 44. We immediately saw some early money enter the market and hit the screen on the road dog here, which forced bookmakers to adjust their price below that key number of 3 down to 2.5 on Indy. The total has also been kissed down slightly from 44 to 43.5. Early market reports are showing a slightly top-heavy ticket count of 55-45 on the Jags which is no surprise, with the return of Nick Foles for Jacksonville.

At first glance, the Colts look to be the better team coming into this week. They have the better record, better point differential and when you look at common opponents Indy beat: the Chiefs, Texans and Broncos, while the Jags lost to Houston twice and were blown out last week, 26-3. Jacksonville lost by double digits to the Chiefs in Week One and were down 17-6 at halftime to the Broncos before coming back in the second half and kicking a field goal as time expired to win the game. With that said, you can throw all that out the window. Foles is back, which is a huge upgrade to the most important position on the field for Jacksonville.

Bottom line: Bet the dog here plus-3.5. When you compare the numbers defensively, the metrics are very similar. The turnover differential is exactly the same, but the big difference is the disparity on offense. Without Foles, the Jags still rank 16 spots higher than Indy in yards-per-play, 15 better in yards-per-rush attempt and 10 notches better in yards-per-pass attempt. Also, bet the under 21.5 in the first half and the under 44 for the full game.

What is the line telling you: The bookmakers offshore opened this line up with the Ravens being 4-point favorites and the combined total set at 49. There has been no movement in the market on a side, but the total has seen a 2-point adjustment towards the over. We love the dog here — Texans plus-4 and on the money line along with the over on the total. If the Ravens were a lock, you would be buying them right now at an inflated price after taking down the Patriots two weeks ago and outperforming the market again last week as double-digit favorites over a real bad Bengals team.

Expect a shootout filled with fireworks since both these teams rank in the basement of the NFL in opponent yards-per-pass attempt, both teams defensive lines also rank in the bottom half of the league in getting to the QB (Adjusted Sack Rate), so with two mobile quarterbacks who will have some time to throw the ball, expect a ton of scoring.

When it comes to the side, if you read between the lines, the Ravens being only a 4-point favorite at home basically tells you this game is a coin flip if it was played on the road. So, as great as the Ravens have looked this year and after taking down the defending world champs two weeks ago, the bookies here are basically begging for all Baltimore money. That's exactly what their getting from your recreational sports bettor as over 60% of all tickets punched so far offshore and in Vegas are on the Ravens.

Bottom line: Bet the Texans plus-4 and the money line. Go over the current total of 51