Not only is Sproles' season done, but his career is likely over as well. 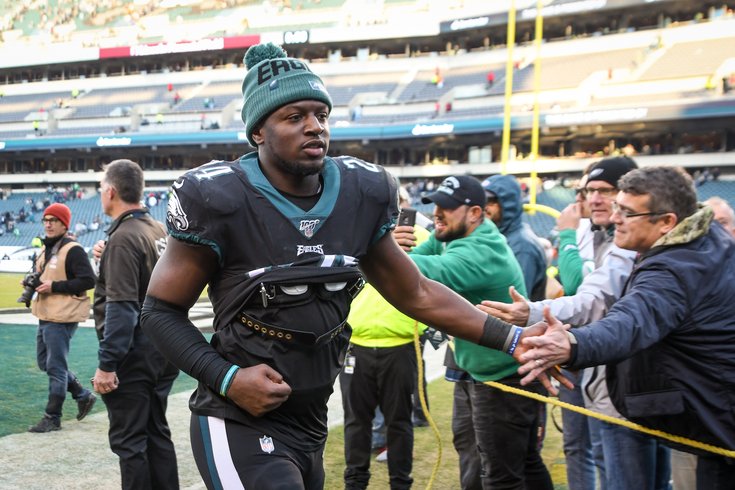 Doug Pederson confirmed on Friday the report that former Eagles running back Jay Ajayi is in Philadelphia today for a workout, and we now have more clarity as to why. Darren Sproles is headed to injured reserve with a torn hip flexor muscle, and Jordan Howard, who suffered a stinger against the Chicago Bears before the Eagles' bye week, has not yet been cleared for contact.

The Eagles are now apparently releasing statements when guys go on IR, Here's their Sproles version:

Statement from the Philadelphia Eagles regarding RB Darren Sproles pic.twitter.com/SomTcRI0g3

Sproles missed 13 regular season games in 2017 as well as the entirety of the playoffs after he tore an ACL and broke his forearm on the same play against the Giants. In 2018, he was considered "day-to-day" for about three months, missing 10 games with a hamstring injury. In 2019, he missed three games with what the team previously classified as a "quad" injury, but are now calling a hip flexor injury.

While Sproles has had an outstanding career, it was a mistake to re-sign him this offseason, and it was odd that the Eagles were giving him offensive snaps as recently as their last game against Chicago when there isn't anything that he does better than Miles Sanders at this stage of his career. Sproles' absence on the field should open up more opportunities for Sanders.

Of course, this (maybe) also means the end of Sproles' NFL career, although I suppose we all thought that last year as well.

Of greater importance to the Eagles is Howard's stinger injury. As noted above, Pederson revealed on Friday that Howard still is not yet cleared for contact. To be determined how the team will list him on the injury report when they release it Friday afternoon.

If Howard cannot go, and if the team does indeed sign Ajayi, Pederson felt that it is reasonable to think that Ajayi could play in a regular season game a mere two days after signing. Pederson also expressed confidence in Sanders being able to handle a bigger workload.

Against a New England Patriots defense this Sunday that is outstanding against the pass, but perhaps a bit vulnerable against the run, Howard's potential unavailability is a major concern.