NHL Draft: Flyers pick D Provorov seventh, trade up to No. 24 for Konecny 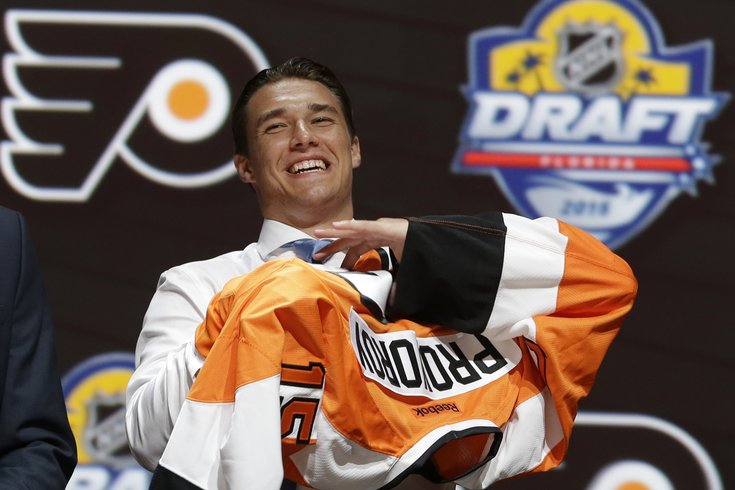 The 2015 NHL Draft got off to a predictable start, with forwards Connor McDavid and Jack Eichel going first and second, respectively.

But that didn't make  a difference for the Flyers, who were able to get the player they reportedly coveted most -- aside from McDavid and Eichel -- with the seventh pick, defenseman Ivan Provorov.

"We believe you build from the back end out and Ivan is going to be a big part of that," general manager Ron Hextall said on the television broadcast immediately following the selection.

A native of Yaroslavl, Russia, Provorov was the youngest player to represent Russia at the World Junior Championships. During this past season with the WHL's Brandon Wheat Kings, the 6-foot, 201-pound blueliner led all rookie* defensemen with 61 points (15 goals, 46 assists) in 60 games and added another 13 postseason points (19 games).

MORE: Live updates and latest rumors from first round

WHEN WILL HE BE READY?

Despite his age, 18, Provorov could rise quickly through the Flyers organization, as some scouts believe he's as NHL-ready as they come.

Training camp would decide, Many scouts say he is NHL ready. https://t.co/hXhIh95cdu

Here's what they're saying about Provorov...

He's very composed with the puck, has excellent vision and knows where everybody is on the ice. He has good hockey IQ and takes advantage when he sees an opening both offensively and defensively. He will play a physical game and can separate the man from the puck.

An offensively gifted defenceman who can direct the game's pace when the puck is on his stick. Provorov is a quick and agile skater with an accurate release on his shot, which he can get off anywhere below the blue line; creates many chances on the power play and can even create offense during the penalty kill. Is an adroit and creative passer who knows how to use his teammates well. All-in-all, a complete defenceman who knows how goals are scored and executes accordingly.

Assets: Has excellent skating ability and a penchant for displaying tremendous mobility on the ice. Is also extremely conscious of the defensive zone. Has all-round ability. Produces good offensive totals, too.

Flaws: Doesn't own ideal size for the National Hockey League level, so he must prove capable of handling the front of his own net. Gets into trouble when he tries to do too much, so sometimes less is more with him.


Flyers trade up to get Konecny at No. 24

The Flyers saw the player they wanted next still sitting on the board when the Maple Leafs were set to pick 24th overall, and GM Ron Hextall decided not to take his chances by waiting.

Owners of seven total picks in the NHL Draft, the Flyers felt comfortable dealing two of them (29th and 61st overall) to Toronto in order to move up to No. 24 and select forward Travis Konecny, who scored 68 points in 60 games last season with the Ottawa 67s of the OHL.

At 5-foot-11 and 175 pounds, the 18-year-old plays both center and wing, which will be a nice luxury for a Flyers team in need of help at forward.

While his 68 points (29 goals, 39 assists) last season are impressive, it was actually a step back from his rookie season, in which he scored 70 points (26 goals, 44 assists) and won OHL rookie of the year.

Tim Panaccio @tpanotchCSN Hextall on Konecny: "He has the heart of a lion."

He's a highly skilled forward who never quits. He skates very well, has excellent speed, is not afraid to get involved in battles and has no fear of taking the puck to the net.

A talented scoring forward that can play either as a center or on the wing; plays with the bite and intensity of a guy who is willing to do anything to win a game. Possesses dynamic skating ability that allows him to accelerate rapidly with each step, incredible hockey sense, electrifying puckhandling skills, and a lightning release on his shot; when you put this skillset together with hard-nosed determination, proactiveness in all three zones, and a physical willingness to grind and persevere, you get a game-changer who can be extremely difficult to play against.

Konecny is a hard prospect not to like. He plays the game the right way and is a very well rounded player. At the beginning of the year, he struggled to find his game, and seemed to be putting too much pressure on himself. His speed is electric, but the creativity was being stifled because he was forcing plays that weren't there. Towards the New Year (including a fantastic showing at the CHL Top Prospect's Game), the light really seemed to turn on for him. He's at his best using his speed in short bursts offensively, dictating pace by stopping and starting quickly. He's also at his best when he's engaging physically, throwing big hits and agitating on the forecheck. Konecny also possesses a fantastic wrist shot with a pro calibre release. As the captain of the 67's, it goes without saying that his leadership qualities are also significant. I think that, really, the only strike against Konecny is size. At 5'10, Konecny plays a much larger game (and needs to play that way to be successful). And he's run into some injury issues, including a shoulder injury that kept him out late in the year and in the playoffs. So there are durability questions. In a lot of ways, it resembles Robby Fabbri's situation last year. Come draft day, watching where Konecny goes is one of the things I'm most curious about.