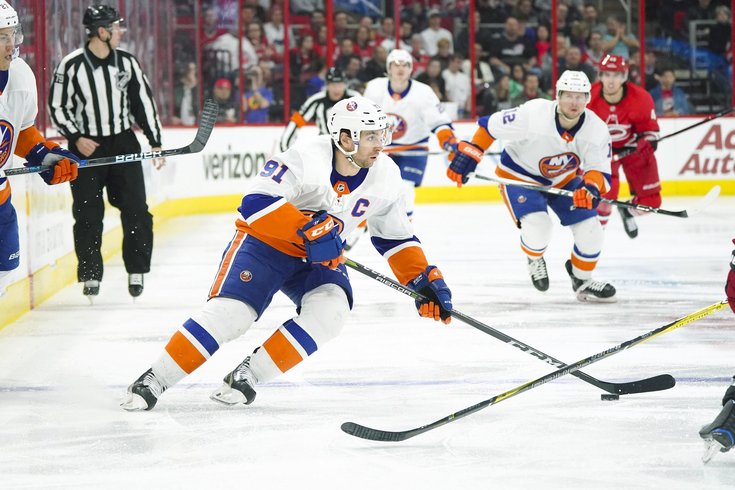 With NBA free agency set to open at midnight Saturday night, all the recent talk around Philadelphia's many water coolers — likely more crowded as the weather (and the rumors) continue to heat up — has focused on the Sixers and whether or not they'll be included in the LeBron James sweepstakes.

Considering the city has at least a shot at landing the best player in the game, that makes a lot of sense. But the NBA isn't the only league whose free agency calendar begins on July 1.

That's right, the NHL also kicks off its annual signing period on Sunday, and with so much coverage surrounding the Sixers (and James and Kawhi Leonard and Paul George and anyone else they might make a run at), it's worth taking a quick break from basketball to see what kind of trouble their Wells Fargo Center roommates, the Flyers, might get into over the coming weeks.

Unlike the Sixers, however, the Orange and Black don't seem to be one of the potential landing spots for the biggest free agent on the market, despite having over $20 million in projected cap space.

And to hear Flyers GM Ron Hextall tell it, it's not his fault, at least not directly.

Earlier this month, it seemed like the Flyers would be hesitant to sign any long-term, big-money deals this offseason, opting instead to let their young talent, of which it seems they have plenty, to grow and develop at the NHL level, much like they did last offseason.

On Friday, however, Hextall clarified his previous comments, saying that while the Flyers wouldn't deal out a big contract to just anyone, there were exceptions to the rule. Like, for example, Islanders center John Tavares, who finished with 84 points last season, two shy of his career hight, and has narrowed his list of potential suitors down to six teams, none of which are the Flyers.

"I misspoke that day or you guys misunderstood me, I said we weren't going to go long-term with a good player. Maybe a great player, we'd look at it," Hextall said with a smile. "I probably misspoke a little bit. We don't want to go long, long term … we'll see where that goes."

So, Tavares? The talk of hockey has surrounded the Islanders' center, who is the biggest name on the free-agent market. According to reports, Tavares' camp is talking to six teams - the Stars, Bruins, Sharks, Maple Leafs, Lightning and Islanders.

Was this the Flyers simply staying away?

"I don't want to mention any names, so I'll just say, we would have liked to have been in there," Hextall said.  [nbcsports.com]

There you have it, Flyers fans. It wasn't Hextall passing on Tavares; it was Tavares passing on the Flyers. I'm sure you'll all remind him of that when he visits the Wells Fargo Center with whatever team signs him.