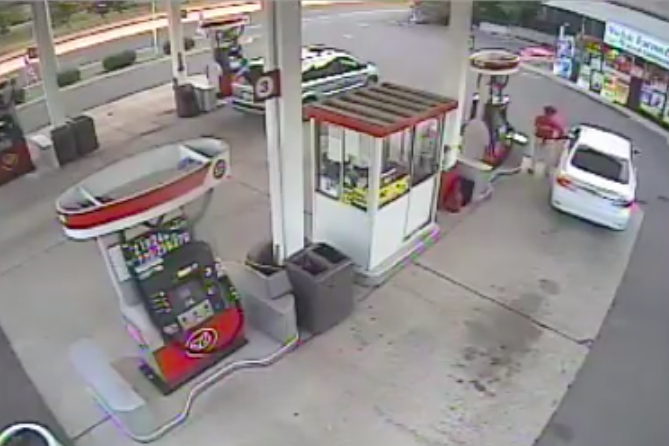 A still image from surveillance video of a gas station robbery in Middletown, N.J.

Middletown Township Police are seeking the public's help in locating a suspect wanted in connection with the robbery of a New Jersey gas station last month.

Police say an unknown suspect pulled up to the 76 Gas Station in the Belford section of the township on Aug. 15 at 7:25 p.m. and asked for $10 in fuel.

The apron ripped away, and the suspect fled north on Route 36, taking approximately $1,500 in cash, police say. The apron has "Fuel One" written across the front, police said in a Facebook post.

Police describe the vehicle as a white, four-door 2009-2012 Toyota Corolla LE with tinted windows, no wheel covers and no visible license plates. They say the vehicle was driven by a black subject, possibly male, and an unknown passenger.

Anyone with information regarding the incident, the vehicle or the subject in question is encouraged to contact police at (732) 615-2100 or Detective Albert Scott at (732) 615-2009. Information can also be emailed to ascott@middletownnj.org