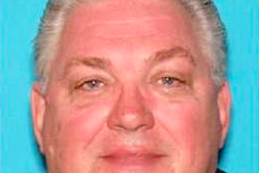 A New Jersey man who outfitted his car with emergency lights, presumably to prank or rob unsuspecting drivers, was arrested this week after he unwittingly pulled over an off-duty police officer on the Garden State Parkway earlier in December.

Police say Richard Goldrick, 68, of Nutley, attempted to stop Sergeant Charles Stab of the Woodbridge Police Department on Dec. 21 as he was driving northbound, according to ABC 7. Goldrick, driving a black Chevy Suburban, activated his emergency lights while tailing Stab in his personal vehicle nearby Holmdel Township.

Sergeant Stab dutifully pulled his vehicle over to the right shoulder, believing Goldrick was an undercover cop. Then, for reasons unknown, Goldrick sped off without exiting his vehicle to speak to Stab.

After the unusual incident, Sergeant Stab provided a suspect description and a license plate number to detectives with the New Jersey State Police, who later interviewed Goldrick.

An investigation led to the seizure of a .22-caliber handgun, hollow point ammo and fraudulent documents kept inside Goldrick's car.

Goldrick is charged with impersonating a police officer, possession of a weapon and possession of false government documents. Unable to pay the $52,000 cash bail, he is being held at Monmouth County Jail.