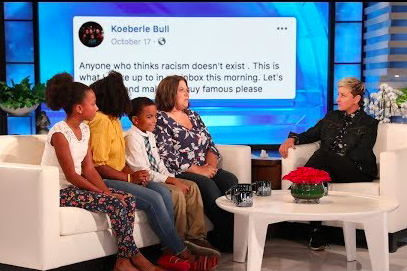 A Lumberton, Burlington County, mother of three who helped Kentucky authorities thwart a potential school shooter this month was reunited with the investigating state trooper during a Tuesday appearance on "The Ellen DeGeneres Show."

Koeberle Bull was horrified when she logged in to Facebook and discovered racially threatening messages from a Kentucky man, later identified as 21-year-old Dylan Jarrell.

The messages from Jarrell attacked Bull, a widowed mother of three biracial children, for acting like a "wanna be" black woman. He said he hoped her "black children gets hung for you being so stupid."

When authorities confronted Jarrell in the area of Lawrenceburg, Kentucky, he was found pulling out of his driveway in possession of a firearm, more than 200 rounds of ammunition, a Kevlar vest, a 100-round magazine and a detailed plan of attack at a school.

DeGeneres brought Bull and her onto her show to unite them with Satterly.

"I owed it to her to help her," Satterly said. "I have a 2-year-old myself. When I saw that message, I thought there's no room for that kind of hate in this world."

The incident came just a few weeks before the deadly attack at the Tree of Life Synagogue in Pittsburgh, where 11 people were killed and six others injured Saturday.

Courtesy of DeGeneres, Bull and her family will spend a week at the Intercontinental Fiji Golf Resort & Spa.