'Let your faith be bigger than your fear,' mother says 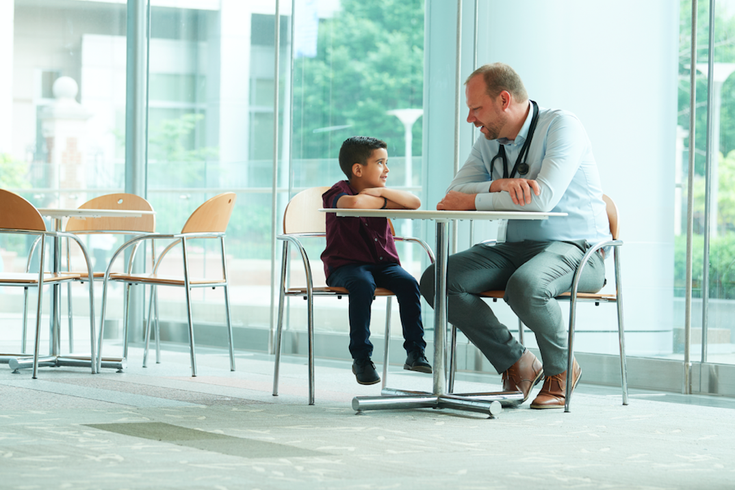 Elijah Patino, 7, sits with Dr. Neil Romberg, the Children's Hospital of Philadelphia doctor who discovered that he had a never-before-seen genetic disorder – and determined a solution to treat it.

The family of a North Jersey boy born with a mysterious disease credits God for helping a Philadelphia doctor to determine his ailment and a treatment.

Noami and Richard Patino, of Woodbridge Township, appeared Friday on the "Today" show to discuss their long journey to find a solution to the strange illness plaguing their son, Elijah, since his birth in November 2010.

Elijah, 7, was born with an autoimmune disorder that gave him an extra copy of the CD40LG gene, which helps the different parts of the immune system to communicate. But the duplicative gene caused his white blood cells to instead attack his own organs, which in turn prompted his spleen to balloon.

But it took years until an immunologist at Children's Hospital of Philadelphia discovered that Elijah had a disease that no one had ever seen. And then Dr. Neil Romberg determined a treatment for it.

With the disorder under control, Elijah now plays sports, loves playing with Legos and hopes to become an engineer. And his family could not be more grateful.

"It's the hardest journey, I think, a parent ever goes through but ... you have to keep on fighting," Noami Patino said on the morning program. "I've always said, 'Let your faith be bigger than your fear.' It was always that fear of not knowing what was going to happen. But just knowing that we were going to get through it – just keep on fighting."

Elijah's symptoms were first discovered during a five-month wellness checkup. Doctors initially thought he had hemolytic anemia, a disorder which destroys red blood cells faster than the bone marrow can create them.

For several years, prescribed medication suppressed his immune system and eased his inflammation. But then he experienced high, spiking fevers during a family vacation to Disney World in 2013.

That prompted a two-week stay at a New Jersey hospital and left his family searching for answers. They traveled to specialists in New York and Ohio, but no one could diagnose his condition. Eventually, they visited CHOP.

Eventually, the Patino family received an unexpected call from Romberg, who had investigated an exome sequencing test ordered by another CHOP immunologist, Dr. Soma Jyonouchi.

Romberg discovered that both Elijah and his mother had the duplicative gene, though the disorder presents differently among women. And he determined that it could be controlled using a very low dose of an immunosuppressive drug.

"We were able to design a personalized therapy just for him," Romberg said on "Today." "It's been remarkably effective. His blood counts are way up. His spleen is way down."

Elijah's older sister, Maya, was with the family on Friday to share their story.

"It's hard when your son or daughter is looking at you, saying help me, and you can't," Richard Patino said. "But that's where your faith comes in. We stand on a solid rock. When nobody else can, God can."