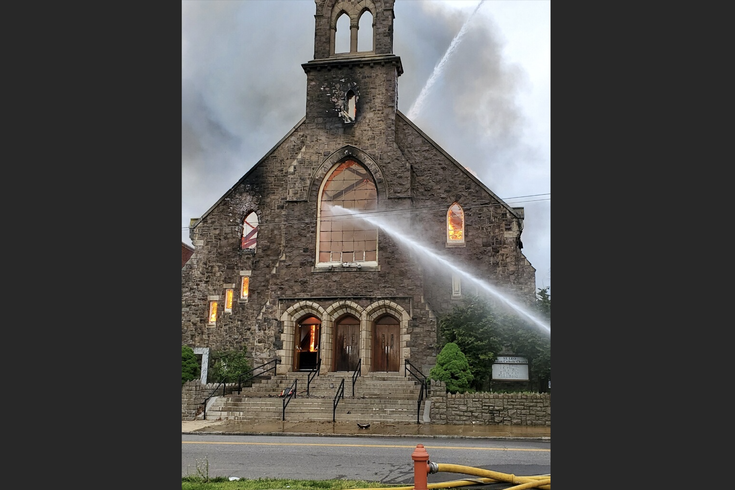 The former St. Leo's Church, built in the Tacony section of Northeast Philadelphia in 1884, was destroyed in a fire on May 9, 2021. Authorities believe the blaze was intentionally set and are investigating the case as act of arson.

The fire that gutted the historic St. Leo's Church in Northeast Philadelphia on Sunday appears to have been "incendiary in nature," investigators with the Bureau of Alcohol, Tobacco & Firearms said Thursday.

The agency is offering a $20,000 reward for information leading to a conviction of anyone responsible for setting fire to the 135-year-old structure. Philadelphia police and the Philadelphia Fire Marshal's Office are assisting in the investigation.

$20,000 REWARD for info leading to the arrest and conviction of the person(s) responsible for the St. Leo’s Church Fire.
You can remain ANONYMOUS!@ATFPhiladelphia @PhillyPolice @PhillyFireDept pic.twitter.com/oQlgJyTDKE

The church at Keystone and Unruh streets in the Tacony section of the city went up in flames around 5 p.m. Sunday, prompting more than 100 firefighters to respond to the scene. It took more than an hour to extinguish the two-alarm blaze, which caused such severe damage that the remains of the building were partially demolished on Monday.

Officials said the church was unoccupied and no one was injured in the fire.

The Archdiocese of Philadelphia merged the St. Leo Parish with the Our Lady of Consolation Parish in 2013, but the church remained open as a worship site until it was permanently closed in early 2019.

According to Catholic Philly, the church building was sold last month to buyers planning to use the site as a space to lease for religious purposes.

Designed by architect Frank R. Watson, the building had been added to the Philadelphia Historical Commission's Register of Historic Places in 2019.

Anyone with information about the fire is asked to call the ATF at (888) ATF-TIPS or email them ATFTips@atf.gov. Tips can also be submitted anonymously online to the Philadelphia Fire Marshal’s Office.