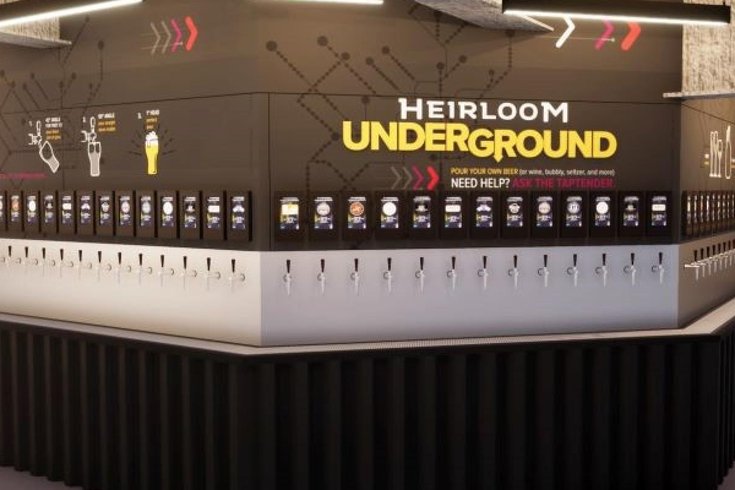 Giant's next Heirloom Market, a 13,000-square-foot shop in Northern Liberties, will feature both an underground taproom and a gaming area.

Giant Food Stores is going big with its Heirloom Market stores. How big? Its next grand opening, a 13,000-square-foot shop in Northern Liberties, will feature both an underground taproom and a gaming area when it opens Nov. 15.

The Northern Liberties outpost will be Giant's third Heirloom Market foray in Philadelphia. The chain opened its first, in Graduate Hospital, at the beginning of 2019, and then opened a second in University City in August.

But only the Northern Liberties spot, which is more than 3,000 square feet larger than the first two stores, comes with the seriously upscale amenities. There will be more than 40 beers, wines, hard seltzers, and hard kombuchas (yes, seriously) on tap in a bar-like area called "The Underground", according to Supermarket News. The drinks will be available for one-ounce samples, or full pours.

The gaming area, meanwhile, will initially offer arcade games, shuffleboard, and something called a "Scrabble wall".

The taps and gaming area will have windows facing outside in an attempt to bring would-be passersby into what is, ostensibly, a beer garden inside a grocery store.

Tommy McClain, the manager of the store, explained the creation of The Underground to Supermarket News:

"As we created each Giant Heirloom Market, we listened to the community and let their feedback guide our plans," according to McClain. "In our conversations, they told us they enjoyed having that third place away from home and work, a place to unwind, get a casual bite with friends, maybe have a drink or play a game. The Underground is our response to their wishes."

The store will be open until 10 p.m. daily, which makes The Underground a reasonable option for a post-work drink, but not exactly a bustling nightlife destination.

The grocery area of the Market will include some more unexpectedly interesting options, including local vendors like High Street on Market and Bella Vista's famous Isgro Pastries.

Giant plans to open a fourth Heirloom Market in Queen Village by the end of the year.