Nurse practitioner and triathlete pushes her body to the limit 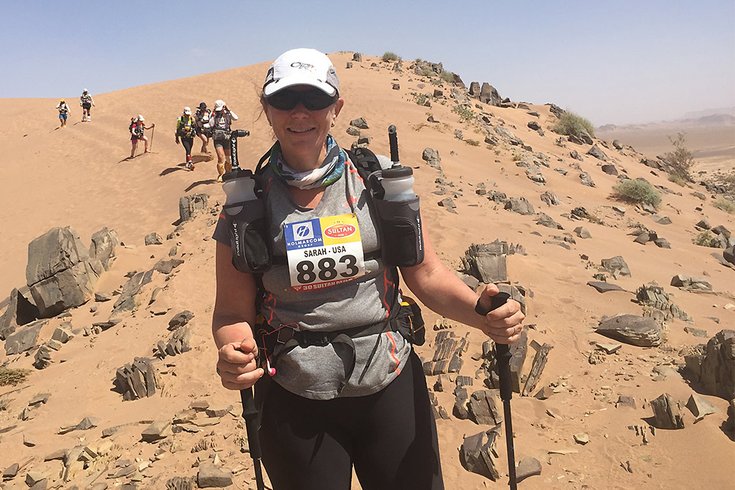 Sarah Aloise competes in the Marathon Des Sables in Morocco.

It is funny the twists and turns life brings us. Sarah Aloise started training for her first triathlon as a way to lose weight after her second daughter was born, but it quickly developed into a passion for endurance sports.

And with six Ironman triathlons and two Marathon Des Sables foot races in the Sahara Desert under her belt, at 52 she is not slowing down any time soon.

A certified pediatric nurse practitioner at the Center for the Urban Child at St. Christopher’s Hospital for Children in Philadelphia, Aloise competed in her first triathlon for the Leukemia & Lymphoma Society in 2005.

It was difficult at first but she methodically followed the training calendar given by her coach so she knew how to break up her exercise routine. All the better to be prepared for the running, swimming and cycling segments of the race.

A friend who did the race with Aloise providee emotional support and helped her push through it. They went on to compete together a few more times until her friend hit her limit. Aloise, however, was hooked and wanted more.

RUNNING THROUGH THE DESERT

One of the most memorable experiences for Aloise so far has been the Marathon Des Sables in Southern Morocco. This ultramarathon foot race is a week-long competition, about 155 miles through the Sahara Desert.

The first time she ran it, she did it with two triathlon friends, and they learned quickly that there was a steep learning curve. The organizers provide a tent and water; you bring everything else (clothes, toiletries, food, perhaps a stove) and carry it on your back. 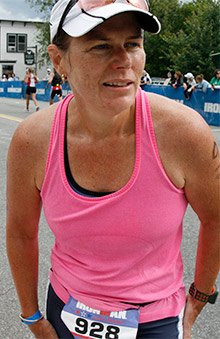 Sarah Aloise will run in the Ironman Lake Placid in New York in July.

They researched gear and supplies, trained relentlessly and eventually discovered that you can never be truly prepared for some things.

“You can’t really imagine what it will be like until you are already there,” she says. “The trick of the race is your ability to manage everything – your calorie intake, your rest when you are not running, and your emotions.”

She found it hard to be cut off from the people you would normally talk to every day. When tired, hungry and lonely, she explained, all you want is for someone to tell you that everything is going to be OK. Instead, you are surrounded by other athletes trying to cope the way you are.

That first Marathon Des Sables in 2015, Aloise made it to the finish line, but a friend had to drop out of the race. They returned two years later with another teammate and this time they all finished the race, with Aloise improving her time.

“It was an incredibly beautiful, and really intense experience. Because you are alone and have to run all day carrying all your things in an unfamiliar environment, it really strips away everything and you find out how far you can push yourself.”

VARIETY IS THE SPICE OF LIFE

While the Marathon Des Sables was an amazing experience, Aloise, who lives in West Mount Airy, says triathlons – and the cross-training they require – are her thing.

She is constantly switching up her training, swimming at a rec center on her way to biking and running around the Philadelphia region. She believes that the cross-training involved in preparing for the triathlon is a lot healthier for the body, reducing the risk of injury.

Aloise is proud to have inspired her daughters to see exercise as more than just a chore. Her younger daughter is a cross-country runner in high school and her oldest, in college, recently took up running. “They have seen how much pleasure exercise has brought me and the friends I have made. I am happy that I have shown them how great being outside and doing exercise can be.”

Aloise also can’t say enough about her husband, Frank, who has supported her passion all these years. “He has been amazingly supportive of the time I spend training and racing. Harder than racing in a triathlon is getting two little girls to all the right spots to catch a glimpse of their mother for 13+ hours!”

Next up for Aloise? The Ironman Lake Placid in New York in July.