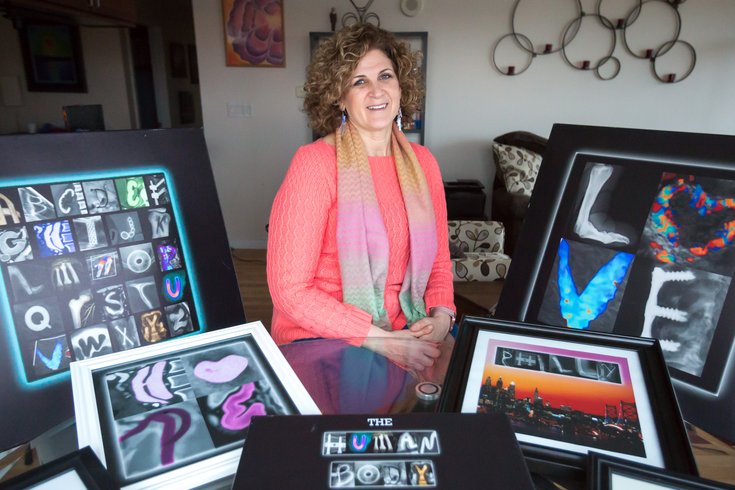 Radiologist Dr. Susan Summerton poses in her Center City home with some of her artwork from X-ray, CAT scan and MRI screens. “It is almost like a third eye," she says. "It allows me to find art in what I do.”

But Susan Summerton, M.D., sees them as so much more.

Summerton, a diagnostic radiologist who lives in Center City and works at Delta Medix Breast Care Center in Scranton, sometimes sees the letter L in a bone fragment or the shape of a sheepdog in brain tissue. Even the Liberty Bell in a gall bladder.

“All radiologists interpret what they see and come up with a diagnosis, but I have noticed over the years that certain people I work with, myself included, have this special knack for finding the unexpected in the imaging studies and it is not like we work at it. We are just minding our own business and something jumps out at us and grabs our attention,” she says.

“It is almost like a third eye. It allows me to find art in what I do.”

Summerton, 54, creates inspirational messages, signs, wall décor and personalized gifts out of the letters she finds on medical scans and sells them through her website, XrayArtistry.com, but she didn’t always recognize the artist within.

Starting to collect the letters about 20 years ago, her goal was to recreate a poster she owned of the alphabet spelled out in different butterfly wing patterns, but using the scans.

“Now and then I would notice embedded in the x-ray what looked like a letter, and it dawned on me that I could collect the letters and someday make myself a poster like the one I liked so much,” she says.

In 2014, however, she entered her first art contest. As part of the Radiological Society of North America's international meeting in Chicago and its 100-year anniversary, it was holding a contest for radiologists around the world. One of the categories was x-ray art.

“...I decided to write the RSNA’s slogan for that year’s conference, "RSNA 100: A Century of Transforming Medicine," in x-ray letters,” she says.

She called her piece, "Letters to the RSNA," and while it didn’t win, it did receive an honorable mention and was displayed at the convention.

“It was pretty exciting for me,” she said. “I think 50,000 people come to this and it was the first art I ever created.”

Still, art wasn't her goal – at least until she began to get requests from her colleagues to make prints of their names or their children’s names. She now does a lot of commissioned pieces for gifts, signs for physicians and surgeons’ offices and for medical conferences, but also creates work that she finds personally inspiring as well. Her LOVE and Philadelphia prints are available at the Mütter Museum gift shop in Philadelphia. 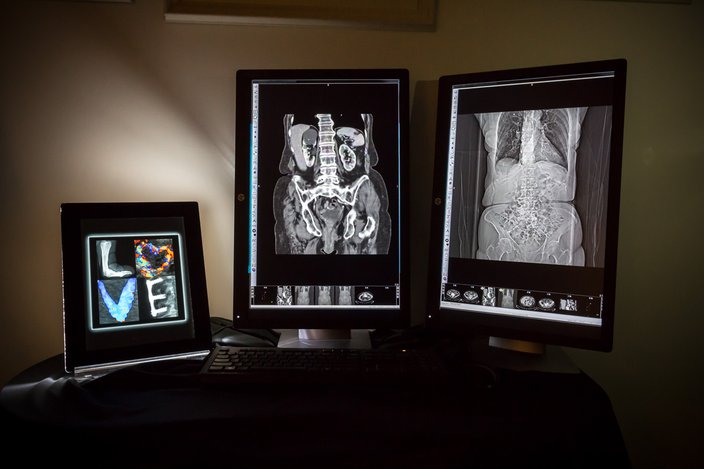 Summerton is able to read digital medical scans from monitors in her Philadelphia home.

Summerton loves how the art is an interesting blend of her life. One of her favorite pieces spells out "The Human Body Is the Finest Work of Art." Another piece called "Oh Snap," where the phrase is spelled out with a broken bone underneath, is also a favorite.

“I did that one for fun because it just makes everybody smile,” she says. “I exhibited it at an orthopedic surgery conference and normally stoic orthopedic surgeons would break out into a smile when they saw it. I love creating these pieces. How lucky I am that people get joy from something I create?”

A big part of the Summerton’s attraction is her love of puzzles, finding hidden clues and piecing them together to find meaning. That is why she always includes a letter guide with her artwork so people can guess the body part and image modality for each letter.

BUMPS IN THE ROAD

At one point early on in her work, a snag nearly halted Summerton's creativity. As a researcher and teacher, she had always used examples of imaging studies in lectures and article. As long as there was no identifiable patient information in the image, she never had to seek individual patient consent.

With her art, however, she quickly realized the same rules didn’t apply. The patient consent forms for imaging studies only allow them to be used for educational and research purposes, not for art or profit, which meant she couldn’t use the original images she had been collecting for years.

She thought that was the end of her art. But her cousin helped her find the perfect solution: a graphic artist (and radiologist) to digitally recreate those original images.

“This way it was my own computer graphic inspired by what I saw in the imaging studies. It was a good fix and turned out to actually be a blessing because the detail and resolution are better than it would have been in my teaching files,” she says.

About two years ago, Summerton left the teaching hospital where she worked and went into private practice. It was a decision that would permit her more time to develop her art business.

“For years, I was raising my three kids and teaching so most of my free time was either preparing lectures and researching or taking care of my kids," she says.

“I wanted to be a great teacher but I also wanted this art business to work. And I couldn’t do both well. I just couldn’t balance them. It was a difficult decision, but at the same time I felt like the art was my fourth baby. I had to nurture it. I had to give it time and energy to really help it grow up and mature and see where it could go.”

Now, she has her nights and weekends free to work on her art, and hopes to eventually collect a full alphabet for every system in the body.