For nurses, pride in service doesn't wane with age 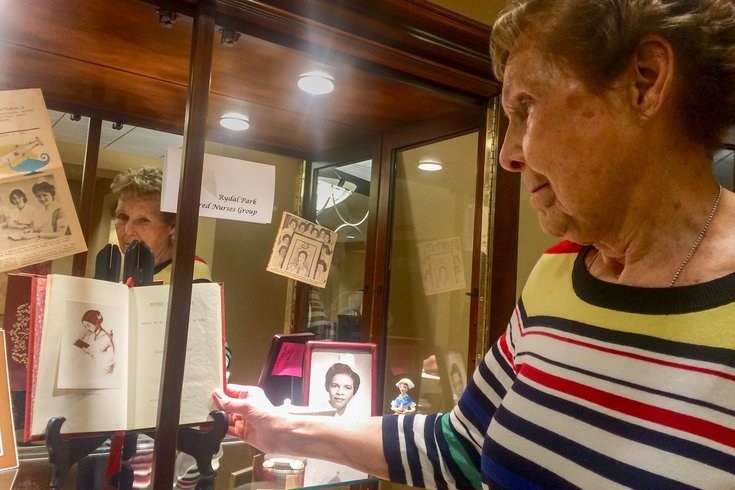 Joan Randolph has retired from nursing, but nursing has never really left her.

Shortly before the now-80-year-old Philadelphia native moved into her current home, the Rydal Park retirement community in Jenkintown, Montgomery County, she attended a social gathering to get to know the people there. Immediately, she recognized a nurse she knew from her working days. Then she met another member of her profession. And another.

“When I walked in and saw her, I was delighted, and she said, ‘Let me introduce you to another nurse’…and another lady came over and said, ‘I’m a nurse!’” Randolph recalled, chuckling.

Randolph decided then that she was going to have to start a group for all the retired nurses who live in the community — leading her friend to joke, "You're not even here yet and you're organizing something!"

Two years later, the informal nurses group has grown to 19 members who meet every other month to swap stories and reminisce about their decades of service.

There are plenty of stories to go around. One nurse in the group served in World War II; another worked in a leprosy colony and the Air Force. The abundance of retired nurses at Rydal Park probably stems from the fact that nursing was one of the best career opportunities available to women of Randolph's generation. 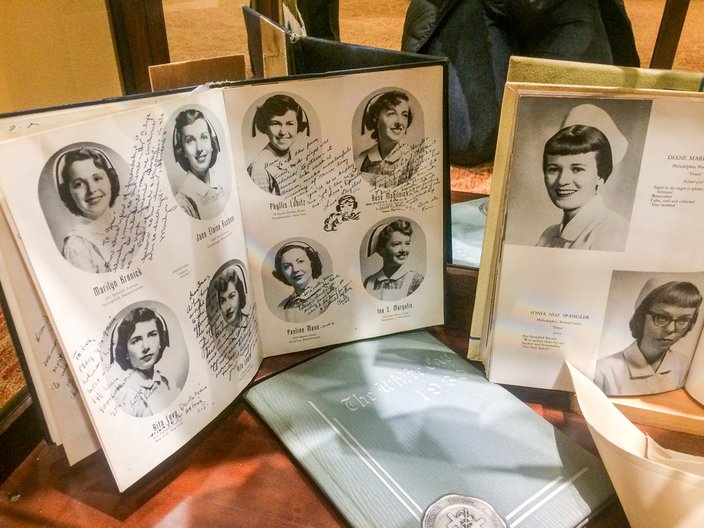 “Years ago, back in our time, when we were considering careers, pretty much women did not have the opportunities they have today…it was nursing, teaching, social work and many women didn’t work outside the home," said Randolph.

The health profession has changed since then — "I would say instead of calling it health care now, it's almost health business," Randolph noted — but opportunities have also grown. Nurses have more responsibilities, greater say in the governance of a hospital and more chances to conduct research or earn advanced degrees.

“There’s opportunities to do many more things than we used to have. I think it’s an exciting career," said Randolph.

To celebrate National Nurses Week, which always falls around Florence Nightingale's birthday on May 12, the nurses group put up a case full of memorabilia. Framed black-and-white photographs show current residents back when they wore white caps and starched uniforms, and nursing school yearbooks are scrawled with well-wishes from classmates who met decades ago.

"That's my book down there," said resident Jane Young, 70, as she ambled by the case. She started volunteering at Germantown Hospital when she was in high school and then worked there until the day it closed its doors in 1999.

Now she enjoys the companionship of the nurses group, saying that her favorite part is "just talking to them."

Some memories, for her, are too sad to discuss. As a health care worker, she saw firsthand the effects of gang violence in the neighborhood.

Randolph admitted that joy and tragedy are both essential aspects of a nurse's career. She credited her education at the Jefferson School of Nursing, now the Jefferson College of Nursing, for helping prepare her for the mental challenges of her profession. 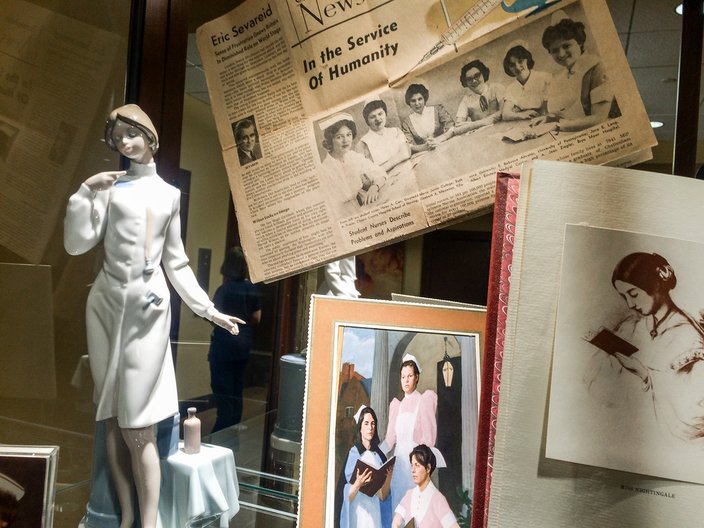 19 retired nurses meet every other month to reminisce about their decades of service.

“We knew that we had the opportunity to see the birth of a new baby, but we would also have the experience of seeing someone at the end of their life,” said Randolph, who rose to be the chief nursing officer at Jeanes Hospital in Fox Chase.

Even the experience of someone's death could be rewarding for a nurse, Randolph said, because "you had an opportunity, at times, when the family was there to lend some comfort to them.”

At the same time, those shared experiences only make the ties between nurses stronger.

“There’s just a bond that exists between nurses as colleagues," said Randolph, "and I think just having that group solidifies that to some extent."