Nurse: Injured passengers 'knew they were hurt but didn’t know how they got hurt ... They were still stunned' 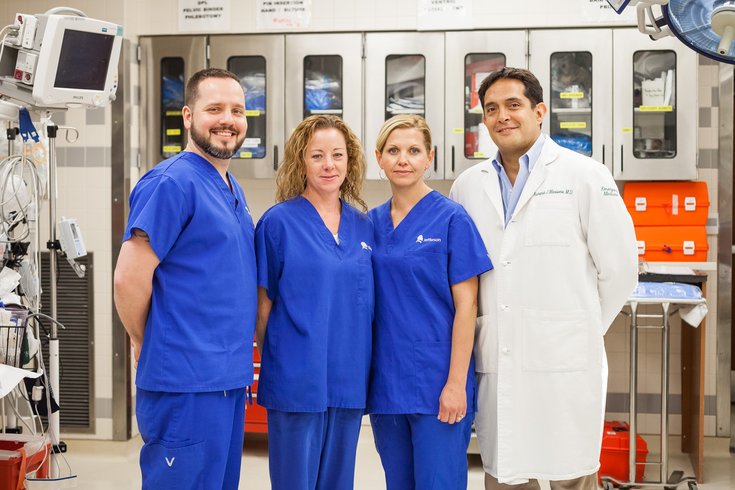 Correction: This story was updated to reflect that Stephan J. McDonald, MSN, RN has been with Jefferson for 11 years, and that Dr. Richard J. Massone is a physician.

May 12, 2015, was like any other weekday night in the emergency room at Thomas Jefferson University Hospital.

"Steady” and “uneventful,” staff described it.

Then, Amtrak Train 188, minutes out of 30th Street Station and headed to New York City, hit the curve at Frankford Junction at a 106 mph clip, more than twice the posted limit.

The seven-car train with 200 people on board, unable to navigate the bend in the tracks, one of the sharpest curves on the Northeast Corridor, flipped over, sending dozens of passengers and several Amtrak workers careening about the cars.

When the train finally came to rest, dozens of injured needed treatment quickly in the aftermath of the 9:21 p.m. crash.

“I received notification from the state,” said McDonald, a Jeff employee for 11 years who lives in New Jersey. “By that time NBC and CBS were right there. I was at home, and the next thing I’m doing 90 mph on (Interstate) 295. I have a 24-hour responsibility for issues of that magnitude.”

Jefferson was one of 10 hospitals in the city to treat a total of 172 people injured in the crash. Eight people would die of their injuries from the crash.

That night the emergency room team at Jeff would see two dozen crash patients, eight of them critical. Several longtime staff members recalled their experiences on the night of the tragedy.

'YOU GUYS BETTER GET READY'

They were tipped off to the coming barrage, said Dr. Richard J. Massone, a six-year physician on duty that night, remembering that an ambulance driver coming in with a patient not related to the train crash warned the staff to “be prepared.”

“He said, ‘You guys better get ready,’ so people went online and checked the news outlets,” Massone said. “We had maybe a 20- to 25-minute lag time” before the first casualties came through the doors.

After receiving word that Jefferson in Center City was one of the hospitals that would receive victims of the train crash, the ER staff rallied and worked as a team, just like any other day.

“We were preparing for who would do what when they arrived,” said Diane Higginson, a registered nurse.

“We are very proud of our team’s response to this unfortunate event and believe it highlights the tremendous commitment of our staff and the critical importance of being prepared for these types of events.” – Joseph Anton, vice president of clinical and support services at Jeff

"We were the farthest hospital from the crash,” added Megan Heyer, a registered nurse on staff for 24 years. “We are on the outskirts.”

“We don’t change how we treat patients, we change how to handle 12 people at once,” McDonald said. “It’s a unique challenge and that’s why the lead time was so helpful.

"The first patient arrived via a police paddy wagon. I only remember one or two ambulances coming," he said. "The rest came on the bus. We got a lot.”

“I just remember jumping back and forth from the trauma bay, where most of the injured were. and to room 7 and room 14,” Massone said. “It was a triage type of situation, trying to direct with the nurse manager and the charge nurse. We worked as a team and that’s what I remember most.”

“Temple received 40, and Penn got two,” Heyer said. “The next call we received was they were putting patients on a SEPTA bus for transport, so we got ready for that.”

“We set up a triage for the original arrivals,” Higginson said. “And Megan (Heyer) went out to meet the bus. We put the walking wounded in chairs.”

“We utilized some of the rooms,” Massone remembered. “I saw as many people as I could.”

According to Heyer, the patients being treated couldn’t tell nurses and doctors what happened.

“They knew they were hurt but didn’t know how they got hurt,” Heyer said. “They were still stunned. They talked about the train like they were talking about someone else.”

McDonald remembered the looks on the faces of patients coming in.

“They were all pretty stunned,” McDonald said. “The patients were well-dressed people covered in soot.”

McDonald recalled one male patient in particular who kept asking doctors to tend to others noting the man ended up being one of the more injured ones.

“After the last train patient was treated it was right back to work. We deal with devastation on a daily basis. When you have an issue and it multiplies by 10 or 20 you have to handle it in a different way.” – Stephan J. McDonald, ER manager at Jeff

According to Massone, patients treated at Jefferson primarily suffered broken bones and one patient sustained a punctured lung.

McDonald complimented the rest of the staff at Jefferson commending nurses who came from other departments to assist.

“It was remarkable,” McDonald said.

“Nurses showed up from other units prepared to assist,” Heyer said.

“Internal Medical doctors came down and obviously the trauma doctors came,” Massone said. “It was striking. Our team of nurses and residents did a good job assessing patients. Many patients had contusions and scrapes.”

“I made a point to go to the other nurses who came to help to thank them because they were so eager to help,” Heyer said. “We were still able to run our ER. We did a mass casualty incident and also had our regular patients.”

“After the last train patient was treated it was right back to work,” McDonald said of the ER staff. “We deal with devastation on a daily basis. When you have an issue and it multiplies by 10 or 20 you have to handle it in a different way,” noting staff are advised of counseling available if needed.

“Our way of communicating is different than different medicines,” Heyer said. “Our needs are direct. We don’t beat around the bush. It defines emergency medicine and nursing.”

McDonald was impressed with the interdisciplinary support for the mass casualty event.

“It affirmed my career choice,” McDonald said. “Megan (Heyer) managed 15 patients by herself.”

'THERE ARE NO STARS HERE, ONLY A TEAM'

Heyer remembers deciding who was sick and in need of treatment and who was not sick.

“Being a part of a team is really important,” Heyer said. “We saw nurses from other floors come down. We saw trauma surgeons going from room to room to see patients. Our team has a good rapport and at that time and at that moment to just assigned people. There are no stars here, only a team.”

McDonald was particularly proud of a recent award Jefferson’s ER staff received after being selected 2016 Best Nursing Team by ADVANCE, a nurse’s magazine as testament to what was accomplished the night of the tragic crash.

The ER was credited by the publication with streamlining and reducing the wait time for the estimated 62,000 patients treated annually with a new workflow system in place.

“As a Level 1 trauma center, Jefferson’s Emergency Department needs to be ready for anything,” said Joseph Anton, vice president of clinical and support services. “We frequently drill and plan for these types of mass casualty events. The staff’s preparations and propensity for teamwork allowed them to shine when it mattered most. That evening also highlighted the great work of our colleagues in hospitals throughout the region as well as our partners in the Philadelphia Office of Emergency Management and the Hospital Association of Pennsylvania.

“In addition to rapid triage and medical care, staff quickly tended to the emotional needs of our patients and their families," he said. "We are very proud of our team’s response to this unfortunate event and believe it highlights the tremendous commitment of our staff and the critical importance of being prepared for these types of events.”

The night of treating multiple patients from the train in the ER ended for staff at 1:20 a.m. May 13, four hours after the crash.

“At the end of that day I just took a deep breath and drove home,” Massone said.