An ode to Bankers Club, the best vodka

On National Vodka Day, here's why I choose frugality over flamboyance 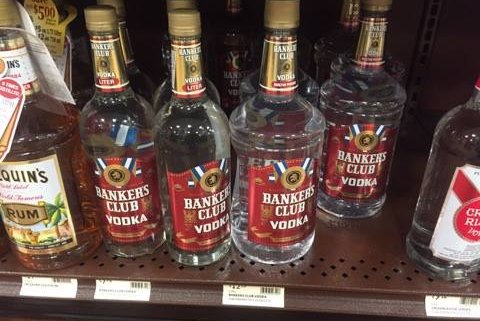 Sans (insert unfunny and slightly political joke about Russians), nobody does. When you say you like vodka, what you mean is you're in college and like a cheap, clear liquor to rip shots with. Or, you mean you like it dressed up in a cocktail recipe you found on Delish. Or, you're a bottle-service bro who's truly trying to embrace the Jordan Belfort image of yourself you've created in your brain.

But you don't actually like it. Vodka is a utility infielder. It doesn't carry the same musky, Cowboy lore as whiskey. You don't break out the salt and lime and hold insensitive celebrations like with tequila. It just does the dirty job of taking the edge off.

Which is why it's always amusing when bougie drinkers chide me and others for picking Bankers Club, the bottom shelf, $12, Maicer Izturis of alcohol. "You're out of college, can't you afford to drink something nicer?" First off, I am a professional writer, so, no, and please stop asking me that question. Second, why pay more to put lipstick on a pig?

Color me unimpressed by high-class brands like Grey Goose, the so-called "best-tasting vodka in the world." Bankers doesn't need orchestrated marketing campaigns to convince people to buy it. In fact, Bankers Club doesn't even have a website. It doesn't need one. You see that big, plastic bottle near your ankles in the liquor store and you know exactly what you're getting.

Spare me your vomit-inducing vodkas that add flavors like the "Freestyle" Coke machines you see in renovated fast food restaurants. The list of Pinnacle flavors might as well be "which color is my puke going to be tomorrow?" If you want your drink to taste like grape, pour some grape juice in it.

And do not mention to me Vlad, because that sounds Russian, and Putin hates America. (There's that bad joke.)

Nah, just give me Bankers. It's cheap as hell. No, it does not taste great, but no vodka really does. It's palatable enough, and unlike some of the neutered, pricier options, it has enough of a bite to remind me, "Oh right, I'm drinking alcohol."

Somehow, cheap, domestic beers get a rough-and-tumble, blue-collar reputation, as do inexpensive brands of brown liquor, yet drinking Bankers is treated like some quiet cry for help.

Well I, a man of simple taste, do declare: Give me Bankers. For better or worse, nothing else compares.