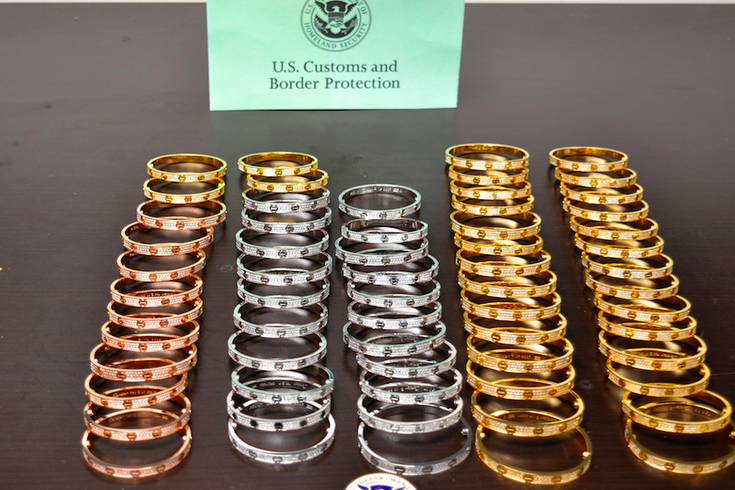 Customs officials have seized millions of dollars worth of Chinese counterfeit designer jewelry in Philadelphia over the past few months, authorities revealed on Friday.

U.S. Customs and Border Protection officers said 23 pieces of counterfeit jewelry were intercepted on March 20 and another 64 pieces were spotted on April 3.

The first parcel, bound for Cincinnati, contained bangles from Hong Kong that were presented as authentic but appeared to be of poor quality and packaging.

In the second case, CBP officers examined a parcel that was supposed to contain an ornament. Instead, they found counterfeit designer jewelry presented as various brands, including bracelets, earrings and rings bearing the names Cartier and Tiffany.

Samples of the seized products were submitted for analysis by trademark holders, who confirmed that the jewelry was counterfeit.

Had it been authentic, the retail value of items in both seizures would have totaled more than $3 million.

“Our primary concerns in situations like these are consumer safety and trademark protection," said Joseph Martella, CBP director at the Area Port of Philadelphia. "Customs and Border Protection will continue to work closely with our trade and consumer safety partners to identify and seize counterfeit and inferior merchandise, especially those products that pose potential harm to American consumers."

A typical day in 2017 found CBP officers seizing $3.3 million worth of products in violation of intellectual property rights.