'Ain't I a fool but that's love,' private writes 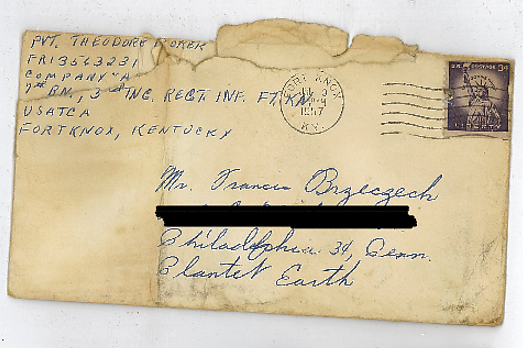 Cody Gladstone found a letter written by U.S. Infantryman in the 1950s hidden behind the wall of his Port Richmond house.

A six-decade-old letter hidden in a Philadelphia home tells the story of a U.S. infantryman's faithfulness to the woman he hoped would become his bride.

And the Port Richmond resident who found the letter Wednesday night behind some drywall during a renovation of his new home hoped to learn if wedding bells ever rang for the serviceman and his gal.

It only took Cody Gladstone a few hours on Thursday to discover the answer: They did.

Today, Theodore and Lorraine Borek live in the Poconos. But 60 years ago, Borek was a private in the U.S. Army. And Lorraine was the woman he fancied.

Writing from Fort Knox, Kentucky, Borek informed Mr. Francis Brzeczech that he decided "not to get any tail" because he wanted to wait until he married Lorraine. 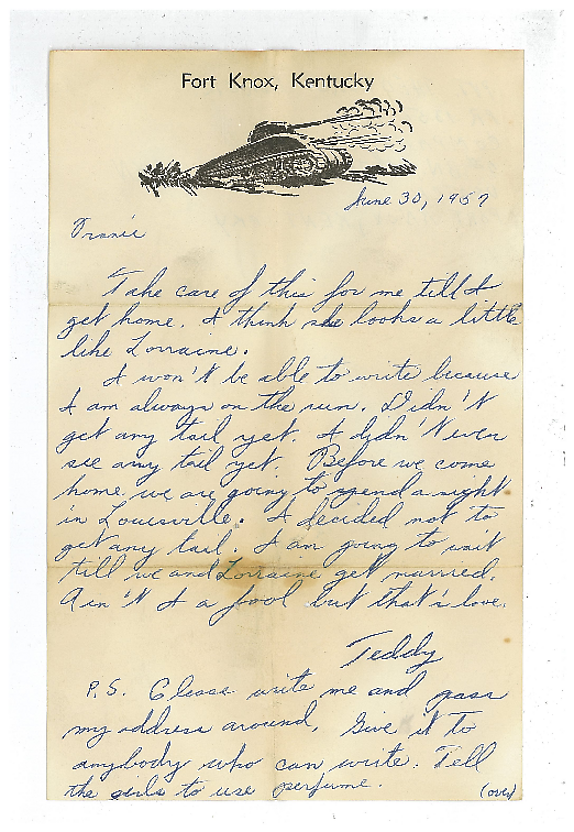 Written June 30, 1957, this letter was found hidden behind a wall of a house in Port Richmond nearly 60 years later.

Gladstone, 24, found the letter in the home he recently purchased with his wife, Marley. Tucked inside its original envelope, it had been nailed to a stud in the wall of a bedroom closet.

"It was in good condition," Gladstone said. "It was just behind a piece of wood. It wasn't wet or anything."

He opened it to find the following message:

Take care of this for me till I get home. I think she looks a little like Lorraine.

I won't be able to write because I am always on the run. Didn't get any tail yet. I didn't even see any tail yet. Before we come home we are going to spend a night in Louisville. I decided not to get any tail. I am going to wait till me and Lorraine get married. Aint I a fool but that's love.

P.S. Please write me and pass my address around. Give it to anybody who can write. Tell the girls to use perfume."

The letter was mailed to an address in Harrowgate, a neighborhood that borders Port Richmond. Gladstone suspects that Franie might have hidden the letter while doing construction, hoping someone else might discover it years later. 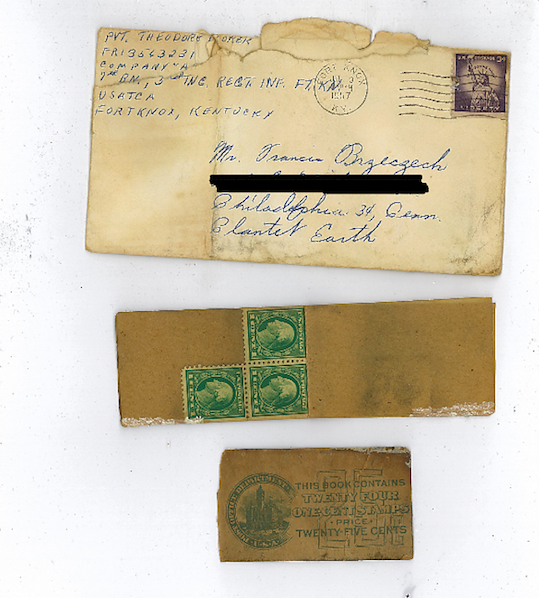 Cody Gladstone found this envelope, containing a six-decade-old letter, nailed to a stud of a wall in his Port Richmond home.

Gladstone said he was ecstatic to find the letter.

"I've always really liked older things," Gladstone said. "The 50s and 60s seem really nostalgic compared to today. My wife and I smiled a lot. We laughed at the letter."

Gladstone posted the letter to Imgur and reddit in hopes of learning whether Borek ever married Lorraine. The letter is just one month shy of turning 60 years old.

"Considering the contents of the letter, he seemed pretty devoted to Lorraine," Gladstone said Thursday morning. "That's a 17- or 18-year-old-kid. ... I'd love to know if Theodore and Lorraine ever got married."

By Thursday afternoon, Gladstone had connected with Teddy over the phone, thanks to a few people who saw his social media posts.

"He laughed," Gladstone said afterward. "He said he hadn't even remembered writing it. That portion of his life was a pretty speedy blur. He said he had joined the military. He went to college and got married."

Sixty years later, Gladstone is sending the letter back to Teddy.