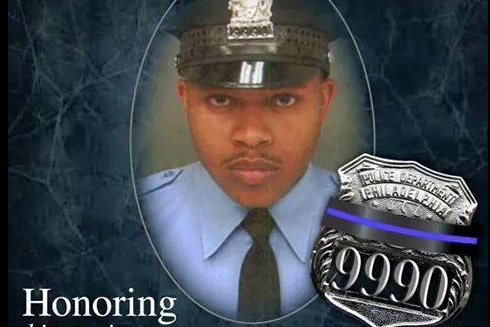 Slain officer's heroics in shootout may be shown in court

Six weeks after the fatal shooting of Robert Wilson III, Dan Steinberg remains impressed by the outpouring of financial support raised to benefit the fallen police officer’s family.
Steinberg, a web designer whose company runs the Philadelphia Police Department website, established an online fundraiser to aid a trust fund established by the Fraternal Order of Police Lodge No. 5. His gofundme.com fundraiser tripled his expectations.
“We ended at $35,165, which was pretty awesome,” Steinberg said. “We started with a modest goal of about $10,000. The thought was we would blow by that, but I don’t think we expected to more than triple it. So that was pretty neat.”
Wilson, 30, was killed March 5 while responding to a robbery at a GameStop in North Philly. His funeral, held at the Palestra, drew thousands of mourners.
The FOP established a trust fund at the Police and Fire Federal Credit Union to benefit Wilson’s family. Donors can contribute by mailing or delivering checks to any of the PFFCU’s locations.
Yet, Steinberg surmised many others would give if an online option was available. Steinberg said he pitched the idea and was given permission to launch a gofundme campaign.
“It sounds kind of lame, but a lot of people just don’t have the time to sit down and write a check and go to the actual bank locations to make a donation,” Steinberg said. “There were tons of people who gave 5, 10, 15 or 25 dollars, who no question wouldn’t have contributed otherwise at all.”
Steinberg credited much of the gofundme campaign’s success to the police department, which pushed fundraising efforts through its social media platforms.
When Steinberg closed the campaign earlier this month, 684 donors had contributed to the trust fund.
“It was pretty amazing to see all sorts of people come out for this,” Steinberg said.
The total funding for the FOP trust fund is not being publicly disclosed. Contributions are still being accepted.
Donors can mail contributions to the Police and Fire Federal Credit Union, 901 Arch St., Phila., PA 19107. Make checks payable to The Robert Wilson III Family Memorial Trust Fund.