Spout Off commenters say use of candidate's language offensive 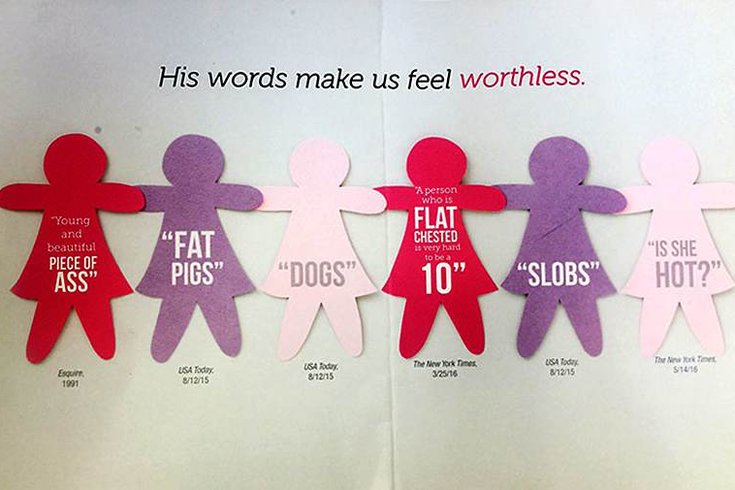 A mailing sent to voters in New Jersey by the Pennsylvania Democratic Party angered some recipients who said they didn't want their young children to read it. The mailing reproduces quotes from Republican presidential candidate Donald Trump.

Donald Trump's past comments about women have been the topic of much discussion this election.

He's called women he didn't like "fat pigs." He's said it's hard for a woman to be attractive if she's "flat-chested." In 1991, he said it didn't matter what the media said about him, as long as he had "a young and beautiful piece of ass.”

All of those quotes were highlighted by a recent mailer sent out by the Pennsylvania Democratic Party in an attempt to showcase Trump's "offensive language" and past comments about women, according to party spokesperson Brandon Cwalina. 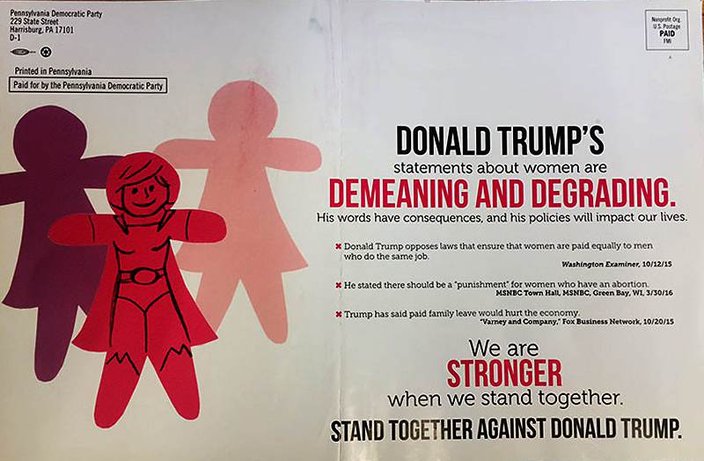 "Donald Trump's statements about women are demeaning and degrading," reads the mailer produced by the Pennsylvania Democratic Party.

And one writer to The Cape May County Herald's Spout Off section — an anonymous forum for South Jersey residents to rant — was all riled up by the campaign postcard.


No, not because Trump said those things, but because the Pennsylvania Democrats would print and mail them.

"I cannot believe a (sic) Pennsylvania Democratic Party sent a giant postcard to my house with the words, 'piece of [expletive], fat pigs, flat chested is very hard to be a 10, slobs, is she hot and dogs' written in very large letters," the anonymous person from the Wildwood/Collingdale area wrote (why a South Jersey resident is receiving Pennsylvania mailers is unclear).

"This is no way to get your point across. My 11-year-old daughter and her 10-year-old friend were looking at this when I came home from work."

And others chimed in to agree. One commenter wrote, "There is absolutely no excuse for sending such a mailer," while another called it "very thoughtless advertising."

Commenter SeeGee responded to someone defending the ad: "If I hear some crass words out in the street, yet I come inside and repeat what was said in front of the kids, am I any better than the individual out in the street?"

When asked what he would say to someone who was offended by the mailer, and not by Trump saying those things in the first place, Cwalina provided the following statement:

We agree Donald's Trump language is offensive and insulting, and he needs to be held accountable for his degrading and sexist remarks about women (see Alicia Machado and Jennifer Lin). The reaction to Donald Trump's quote underscores how he is unfit to be President of the United States and how people do not want to hear four years of this kind of talk from our Commander-in-Chief.

At the first presidential debate, Trump told Hillary Clinton that he noticed "the very nasty commercials that you do on me in so many different ways, which I don't do on you."

However, an Associated Press review of Clinton's 32 television ads found that 24 of them show or mention Trump, and a "majority of those feature raw footage of him rather than others opining on his words and actions."

Trump has only run four television ads so far, three of which take shots at Clinton, including one that uses her "basket of deplorables" comment.