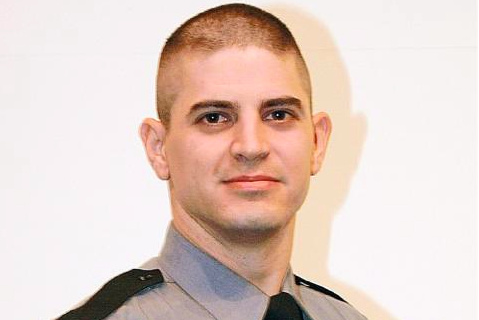 Cpl. Byron Dickson. Dickson was killed as he left the barracks in Blooming Grove, Pennsylvania on September 12, 2014.

Exit 30 off of Pennsylvania Interstate 84 is expected to be renamed in honor of slain State Police Cpl. Bryon K. Dickson II.

Dickson, 38, was killed in an ambush attack at the Pennsylvania Blooming Grove Police Barracks on Sept. 12, 2014, located about a mile from the Interstate exit. He was a U.S. Marine Corps veteran and left behind a wife and two young sons.

State Trooper Alex Douglass was also injured in the attack but survived.

After a weeklong manhunt, Eric Frein was arrested and charged with first-degree murder for the attacks.

The Pennsylvania Senate unanimously approved the bill Monday to name the exit in his memory, PennLive reports. It is now headed to state Gov. Tom Wolf for enactment and is expected to be signed.

Read the full report at PennLive.com.