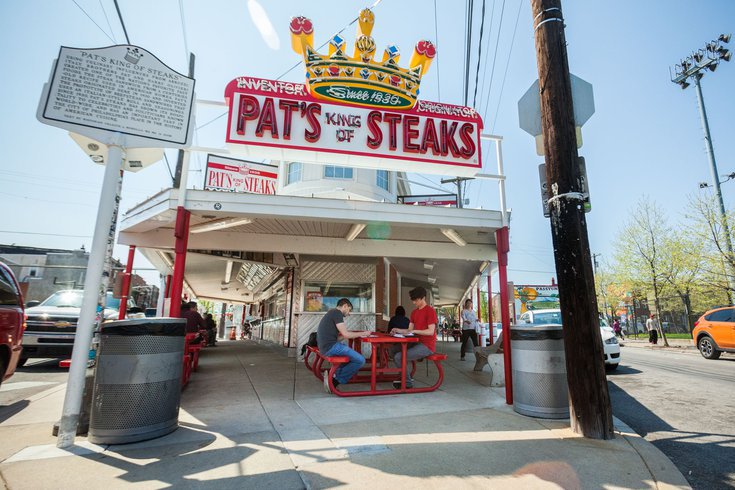 A deadly fight outside Pat's King of Steaks on Sept. 16 was marked the second life lost to violence at the South Philly cheesesteak shop in the last two months. Owner Frank Olivieri doesn't believe his business is the common denominator.

Frank Olivieri is used to his business making headlines for being among the oldest and most iconic cheesesteak shops in Philadelphia, a 24-7 operation that takes prides in its status as a South Philly landmark.

In the last two months, Pat's King of Steaks has garnered attention for all the wrong reasons.

Two people have been killed outside the business at Ninth Street and Passyunk Avenue in a pair of late-night arguments that quickly escalated into deadly violence.

Olivieri has witnessed the heartbreak, worked with police, taken questions from members of the media and heard the criticism from some Philadelphia residents who think the incidents speak to a dangerous climate around Pat's Steaks. Olivieri thinks that's a knee-jerk reaction — one that misses a much larger point about what's plaguing Philadelphia.

"It's not Pat's Steaks. It's a sign of the times," Olivieri said. "It's people running for cover when ATVs are riding on the pavement on Broad Street, or smashing into people's outdoor cafes because they can't have people inside if no one wants to get vaccinated. It's a sign of our times and a lawless city we're living in."

Olivieri has been working at Pat's King of Steaks since he was 11 years old. He proudly says he "lived through the eighties" in a way that implies familiarity with all manner of social breakdown, but not quite this stuff.

Nowadays, he's tired of the dirt bikes and ATVs that keep him up at all hours of the night. He's tired of COVID-19 restrictions persisting because of vaccine refusal. He's now had two people die outside his restaurant in a single summer. He's tired and doesn't feel his shop deserves to be blamed for the recklessness of others.

"We've been in business since 1930," Olivieri said. "That's about 90 years — so let's multiply 90 years by 365 days in the year. It's a pretty big number. If you're looking at two incidents that happened in a short period of time, it's probably just coincidental that it happened that way."

In a city where homicides have spiked to historic levels in the last two years, it's easy to add weight to events that are associated with a high-profile location. That's especially true at a place like Pat's Steaks that has invested heavily in surveillance cameras.

The cameras help solve crime, but they also put violence on full public display in ways that will never gain similar traction for hundreds of other shootings in Philadelphia.

"Since the first incident, we put an additional seven cameras in, so we have 37 high-definition cameras," Olivieri said. "They're so good, you can practically count the pores on people's faces. If anybody's here doing something they're not supposed to be doing, they're going to be caught. That's a deterrent."

Olivieri is right. Most of the people involved in these incidents aren't escaping justice, and those who haven't yet been caught are likely on borrowed time.

In late July, 22-year-old Camden resident David Padro was fatally shot outside Pat's Steaks during a fight that may have stemmed from a parking space dispute and a disagreement about football.

Then last Thursday, during the pre-dawn hours of Sept. 16, 28-year-old Isidro Cortez of Queens, New York, suffered fatal injuries in another fight outside the cheesesteak shop. Investigators believe an argument broke out at Pat's after Cortez and two other victims, including his 64-year-old father, had attended the Philadelphia Union's soccer match in Chester against Mexican professional soccer team Club América

Four men who detectives also believe attended the match at Subaru Park on Wednesday night were captured on surveillance video mercilessly attacking the three victims around 2 a.m.. Cortez was brutally beaten outside Pat's, whose storefront signage is clearly visible in the disturbing video released by Philadelphia police as they seek to identify the four assailants.

In the aftermath of both incidents, Olivieri has been expected to answer for what's now happened twice in a short span outside his business. The scrutiny strikes him as misplaced, if understandable.

"It's not that this place is a public menace. It's an unfortunate circumstance that happened here," Olivieri said. "If you look at Philadelphia, anywhere in Philadelphia for that matter, there's things happening. Just this weekend, we had an incident up at Temple where cars were doing donuts in the middle of the street, gunshots up in the air. That's pretty bad, too. I think it's unique to what's going in our society and what's going on in Philadelphia. Same thing in New York or Camden. It's the lack of police presence."

Olivieri feels he has taken every reasonable precaution he can to safely operate his business around the clock.

"We have a police detail that has been assigned to Pat's Steaks and Geno's Steaks for many, many years," Olivieri said. "A police officer, periodically during his or her shift, stops by and checks in, signs the book, makes sure everything is OK."

Most of the time, an officer making rounds is a routine interaction in the interest of public safety, but on any given night it will be subject to the randomness of a crowd cycling through the area. Short of having a stationary police patrol on site, the detail doesn't stop people from engaging in the kind of spontaneous violent behavior seen in both incidents outside Pat's Steaks.

Olivieri has considered hiring private security, but he has doubts about how much that would help the situation.

"If you hire private security, you always have the problem of the private security guard having a bad day, or maybe they're not handy with a gun," Olivieri said. "You can't bring more guns to a problem and expect that to be the answer. It doesn't work that way. What if he shoots a pedestrian? What if he shoots three civilians? Then what happens? Bringing more guns to the situation isn't the answer. I think it's just about bringing people together and trying to make everybody get along. That's what it is. Maybe that's some kind of fantasy that I have."

A pair of deadly incidents at Pat's Steaks may deepen the perception, both inside and outside the city, that Philadelphia just isn't a safe place to be. Families who make a habit of stopping at Pat's or Geno's before and after sports games, or when visiting Philadelphia, may think twice about where they go and when.

But Olivieri believes Pat's Steaks is built on a strong foundation, the kind that attracts celebrities like Adam Sandler when they're in town to film. Sandler, who has been all over the city working on the Netflix film "Hustle," has made numerous stops at Pat's King of Steaks and even got a cheesesteak there just two days after Cortez was killed.

A post shared by Pat's King of Steaks (@pats_king_of_steaks)

There's no denying how tragic and alarming our vulnerability can be, and perhaps there are important steps that can be taken to improve safety in the area of Passyunk Square.

Philadelphia police did not respond to a request for comment this week about its patrols in the area of Pat's King of Steaks and the department's views on the recent incidents there, or whether PPD plans to make any adjustments in the surrounding context of crime in the third district.

Olivieri says it's important to keep the factors that influence violent crime in perspective and not get too carried away with the location of these incidents. He's frustrated that anything that happens in the vicinity of his business, even if the conflict stems from Capitolo Playground or another nearby park, can easily be blamed on a big name cheesesteak spot.

"There was an incident in the park across the street that happened over there, 10 doors down, and a person complains on the news that it's happening at Pat's Steaks," Olivieri said. "A person got shot right in front of his house and the incident is unrelated to Pat's Steaks, but he doesn't talk about that."

Despite the two incidents at his shop, Olivieri says he hasn't seen any slowdown in the number of cheesesteaks he's selling.

"It hasn't affected business at all," Olivieri said. "We still have the same people that are coming because, you know, you could be anywhere and something could happen. You could be in a mall or shopping center. Like I said, it's a sign of the times in our society."