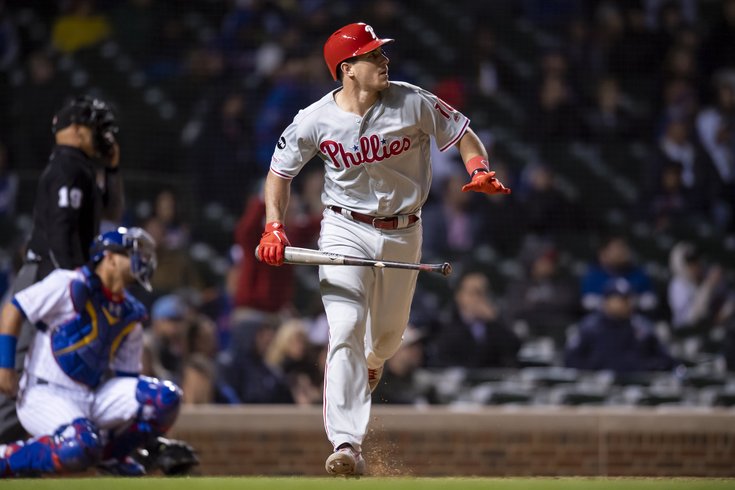 When the Phillies opened the regular season against the Braves at Citizens Bank Park on March 28, the lineup featured three guys who were coming off All-Star seasons: rightfielder Bryce Harper, shortstop Jean Segura and catcher J.T. Realmuto.

The fact that none were playing for the Phillies before that time underscored the lengths to which owner John Middleton, general manager Matt Klentak and the rest of the baseball ops staff had gone to supercharge an offense that had simply been incapable of keeping up with the grip-and-rip style that dominates baseball today.

When the full All-Star rosters were announced Sunday, the Phillies had one representative: Realmuto

Look, the number of All-Star picks is an imperfect yardstick to measure how good a team is. There are so many factors that come into play while constructing the team. Some positions are overloaded with strong candidates, others not so much. There’s the need to have a representative for every team. Big names and big markets are always going to have an edge. That’s just the way it is.

Still, this was a reality check for the Phillies.

Three months ago, the new lineup that generated so much excitement scored 23 runs while sweeping the Braves in a three-game series.

Now, beginning Tuesday night at Sun Trust Park, the Phillies will face Hotlanta again and oh, my how things have changed.

Here are the obligatory, boilerplate disclaimers. There’s still nearly half a season to play. The Phillies have several hitters who, if they are to end up close to their career norms, should be en fuego in the second half. The Braves, far from a perfect team, have warts of their own.

Instinct and experience should have taught us that it’s dangerous to put too much emphasis on the importance of three games in the first week of July. And yet. . .

This series against the Braves feels pretty damn important.

If either team takes two out of three, that won’t move the needle much. But if the Phillies sweep, they’re back within shouting distance. But if the Braves were to win all three, well, that would create the need for some tough discussions in the executive suites.

A week ago, coming off three straight losses to the last-place Marlins at home, Klentak was asked if he could envision any possible scenarios in which the Phillies wouldn’t be buyers before the July 31 deadline. At the time, the team was a game out in the wild card standings.

“We need to start playing better,” he replied. “If we keep playing like this we won’t be a game out of the playoffs a month from now. But assuming we turn it around and play to the level that we expect from this team, we’ll be very much in the mix and I would expect we’ll be looking to add. Whether that’s big additions or complimentary additions I don’t know yet. That’s largely going to be driven by how well this group of guys performs.”

Hmmmm. Since then, the Phillies beat the Mets four straight, coming from behind in each game, walking off the last two. Then they lost two out of three to the Marlins.

There may be quite a bit of season left, but there’s not that much time before Klentak and the rest of the baseball people have to take an honest look in the mirror and figure out whether they realistically have a chance to win the division. And what happens these next three nights in Atlanta could have a big impact on how they approach that critical decision.

If they believe they have a legitimate shot, it logically follows that they’ll be more aggressive about addressing their needs. At the moment, that would likely mean at least one starter and a bullpen arm or two.

That would also almost certainly require giving up good prospects, even for a rent-a-player. But every baseball team runs on parallel tracks, balancing the desire to win now with building for the future.

Which is why, if things don’t go well between now and late Thursday night, it might not make sense to go all out before the deadline. Still try to improve, yes, but more in the margins, holding on to the better youngsters and focusing on players under team control beyond the end of this season.

So, yeah. Even though the All-Star Game hasn’t been played yet, this is an important series for the Phillies. Because of what it means in the standings right now and because of the ripple effect it could have on how the days between now and the deadline unfold.

And there’s at least one telltale sign that the team thinks so, too.

Manager Gabe Kapler and pitching coach Chris Young generally prefer to keep the rotation in order when there’s an off day or a rainout. There’s nothing wrong with that. Giving a starter an extra day every now and then can only help in the long run.

If they stuck with that, despite Monday being an open date, it would mean Nick Pivetta, Aaron Nola and Vince Velasquez would line up against the Braves this week.

Instead, as of Monday morning, they were officially listing TBD for all three games. Which means that, at the very least, Zach Eflin could start in place of Velasquez on Thursday night.

Which would be a tacit acknowledgment that this series is more than just another three games the first week in July. It’s yet another reality check.