Phillies first half season awards: The most and least valuable player, biggest surprise and more 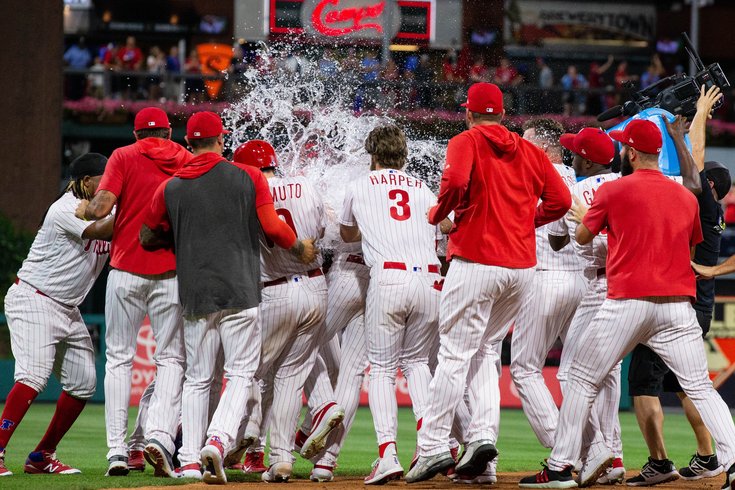 Jay Bruce hit the Phillies' first walkoff hit of the year against the Mets this week.

And just like that, 81 games are in the books and the 2019 MLB season is halfway over.

And bamboo might be actually be a real thing (if you don't know what we mean, look it up).

Jean Segura hit a walk off three-run home run to clinch a four-game sweep over the Mets Thursday, 6-3. The team battled back after a blown save put the Mets on top by two in the bottom of the ninth and now seems to be rolling again, back to five games above .500 after dropping seven straight last week.

We decided to press pause, briefly, before the Phillies hop aboard a flight to Miami to face the Marlins Friday to begin the season's second half. The Phillies are 4.5 games behind the Braves and are just clinging to a Wild Card spot right now, after leading in the division by as many as 3.5 games not too long ago.

The team will be woefully under-represented in next month's All-Star Game — though perhaps deservingly so. There are few individual performances that stand out through the season's first half, making handing out awards a bit difficult.

We're going to do it anyway:

Hoskins may not be putting up the MVP numbers he was posting to start the season, but he's been the most valuable Phillie (especially when considering he's making just over half a million dollars this season).

He is third on the team in WAR, leads the team in homers (18), is second in RBI (52), and is on base most of any Phillies player (.397). His true value may be buried deep in statistics, where he draws the most pitches per at bat of any player in all of baseball (4.53 per PA), and his patience has drawn the most 3-0 and 3-1 counts in the league.

This not only helps to tire out the pitcher, it also gets him pitches to hit, or puts him on base for the 5-6-7 and 8 hitters to drive in. Hoskins is a spark-plug, a solid defensive first baseman, and a hitter who improves his teammates around him. He earns first half MVP honors.

First half team LVP: The Bench

The bench has been absolutely horrible, plain and simple. There are reasonable excuses, mainly injuries which have forced bench players into starting roles and have seen players not expected to be on the big league roster as mainstays (like Sean Rodriguez and Brad Miller).

The Phillies have a .231 on base percentage when pinch hitting— nearly 30 points worse than the next worse team. They are hitting .182 with four homers in pinch hit opportunities. Here's a look at the players who currently comprise of their bench:

*As a Phillie, after trade with Yankees

If you had five guesses as to who would be the Phillies' best starter through the first half of the season, Eflin would probably be your fifth guess. But he leads the entire Phillies squad in WAR (2.7), has the best ERA of any starter, the best strikeout-to-walk ratio of any starter, has two complete games and one shutout.

Here's how he compares to the other opening day starting five:

It's worth mentioning that nine different pitchers have started a game for the Phillies and they currently don't have a fifth starter — with Eickhoff on the IL (and relegated to the bullpen prior).

Honorable mention: It's worth mentioning that after Hector Neris' second blown save Thursday his ERA jumped from 2.41 to 3.18. No one in the bullpen is really worth mentioning, though Adam Morgan has been stellar as the team's left-handed specialist.

On Thursday Nola went seven shutout innings, striking out 10 while walking one and allowing one lone hit. Even after an ace-like performance — his best of the season — he still has an ERA of 4.22 and sky-high WHIP. He's not the Cy Young finalist of last year, at least he hasn't been for the majority of his 17 starts this year.

Nola has gotten better as the season's dragged on, but his drop off may have been predictable. Here's some great analysis from John Stolnis at The Good Phight:

The Verducci Effect, a theory postulated by baseball writer Tom Verducci that many pitchers struggle in the year following a season in which they took a big jump in their innings, has been hotly debated for years. Many don’t believe the idea has merit, and there’s really no way to know if it’s had a detrimental effect on Nola. But what’s ironic is that we’ve seen this kind of season before, and it happened to the last really good starting pitcher that was drafted and developed by the Phillies.

Aaron Nola’s 2019 season mirrors Hamels’ in the level of weirdness, although it’s much clearer why Nola has struggled. His command has left him and his walks and home runs allowed are through the roof. What isn’t clear is why, and it’s the why that pitching coach Chris Young and Nola have to figure out. [The Good Phight]

Thank god we traded for that guy Award: Jay Bruce

The Phillies gave up basically nothing to acquire slugger Bruce from the Mariners and expected him to be a bench piece and occasional spot starter. But with Odubel Herrera under investigation for domestic abuse and Andrew McCutchen out for the season (more on them in a bit), Bruce has been forced into a starting role.

It's one he's turned into a starring role.

Bruce hit home runs in each of his first four starts for the Phillies, and on Wednesday hit the first walk-off hit of the season as the Phils bested the Mets in 10 innings. Springsteen isn't the only one drawing "Bruuuuuuuuce" cries in Citizens Bank Park.

McCutchen went down with a hurt knee and was helped off the field on June 3. Then he tweeted this:

Pray for me. Please

Since Cutch tore his ACL, the Phillies have gone 11-11, dropping out of first place and into uncertainty in the outfield. The veteran outfielder had been hitting .256 with 10 homers, 29 RBI and with the most walks in major league baseball when he went down.

Herrera is having legal issues, and has more or less ended his career in Philly after allegations and investigations of domestic abuse.

It's never good when your GM has this to say about you:

“I can tell you from a roster building perspective we need to assume that we’re not going to have Odúbel anytime soon.”

J.T. Realmuto has been one of the better catchers in baseball this season. McCutchen was having a stellar season before he got hurt. Segura has been a solid middle of the order hitter. Bryce Harper has been... meh.

For the money, Phillies fans hoped Harper would at least be a perennial All-Star — but they decided he wasn't worthy of the effort to vote him into the top nine outfielders in the NL and he will have some rare time off in July.

Harper is a streaky player, and 13 years is a long time, so we are not passing judgement on the contract yet. But so far, 98 strikeouts — almost already a career high — isn't exactly what the Phils wanted to be paying him for.