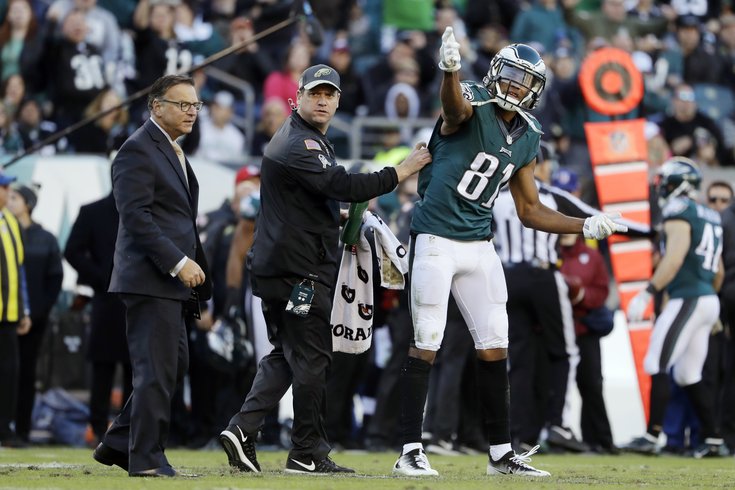 Philadelphia Eagles WR Jordan Matthews reacts to a replay of the hit he took in the fourth quarter on Sunday.

There was a scary moment in the fourth quarter of the Eagles' 24-15 win over Falcons on Sunday.

On a crucial 3rd and 12 with the Birds trailing by two points, wide receiver Jordan Matthews tried to make a catch over the middle, only to be on the receiving end of a vicious helmet-to-helmet hit by Falcons safety Keanu Neal.

Perhaps the most telling part is at the end of this video when a frantic Trey Burton is trying to get the attention of the team's medical staff.

Luckily, Matthews was able to return to the game after that. Had he been seriously injured, the conversation surrounding this hit would be a much different one. Instead of it being about player safety, it's more fuel for the ongoing referendum on NFL officiating.

That's because, somehow, the officials didn't notice what literally every person watching the game saw -- a penalty. And it didn't take a slow-motion replay to see it. Instead, the Eagles were forced to try a 55-yard field goal, which Caleb Sturgis missed.

Immediately following the missed call, Pederson was livid, as was Matthews.

And even after the win, the Eagles wideout was still miffed by the lack of a flag on the play.

“Yes, I definitely think it was a penalty," Matthews said. "My helmet was bent. I had to get a new face mask. I had to change out my face mask and my visor. I don’t know what they saw, but at the end of the day we got the win, so I will take a bloody lip if we get a win.”

On Monday, Pederson said that he hasn't yet heard from the league regarding the hit. But he also seemed to be singing a different tune than he was a day earlier.

"Listen, some of these things happen so fast and they are bang-bang type plays that, to the naked eye at the time, maybe it looks bad when really it's not," he said. "That's why with all these slow-mo cameras and stuff, you see a bunch of different angles. But it doesn't change how we approach it, how we game plan or how we teach our players."

I'm sorry, are you defending the officials? Are you sure you didn't get a call from the NFL, perhaps about something that was caught on camera Sunday?

This was Doug Pederson reaction to the no call on the helmet-to-helmet. He had a right to be fired up. #Eagles pic.twitter.com/POxGhwdESf

It's not like the hit looks any less dangerous or illegal on the second watch. That's not what happened here, and to pretend it is would be a disservice to Matthews and the rest of your players.

But it gets worse because Pederson was again asked about the hit and continued to provide excuses as to why the officials missed the call.

Here's the Eagles coach offering a stumbling excuse for what, in this case, amounts to neglectful officiating:

Well again, we talk about player safety and player safety being the No. 1 importance, and you know -- I'm not going to get into a bunch of it here, but a defenseless receiver trying to make a play -- all of that kind of stuff -- and it happens so fast, and, you know, these guys – Listen, the officials are working extremely hard every week.

They pride themselves in doing the right thing, and they don't want to be the reason for wins and losses, you know? The best games are when you don't even know they are there. So give them credit. It happens extremely fast a lot of times, and we could say the same thing about maybe defensive holding [for example]. The umpire is now on the offensive side of the ball, so there are things there, but by no means can we let it affect us, obviously.

I need to probably be a little cooler in those situations, but you're also looking out for and protecting your player, too.

I'm sorry. Did he just say we should give the officials credit? What?

And, Doug, that whole the-best-games-are-when-we-don't-notice-them thing doesn't really apply. Especially in this game, one in which 18 penalties were called and one of your players was almost seriously injured on a play that should have, but didn't, draw a flag.

Furthermore, it's one thing to defend the officials -- they do have a difficult job -- for missing a hold or a block-in-the-back or even a pass interference. But this? It was obvious to everyone and was the focal point of the play. It didn't happen somewhere else on the field. There was nothing else going on that would be a reason to miss something so blatant.

Because you won the game, because Matthews will play again next week, and -- this is the most important part -- because the officials were 100 percent wrong not to call a penalty, you're in a position to challenge the league, stand up for your players and say enough is enough.

There are some things worth standing up for and this is one. You're not a bitter coach acting like the officiating cost you a win. You're a concerned father figure worried about the safety of your players. There's a big difference.

And if the NFL wants to fine you for criticizing the officials, so be it. That doesn't make them right.