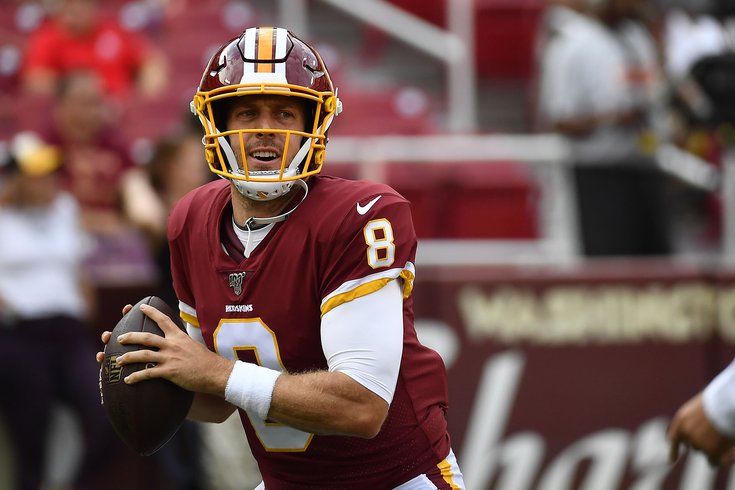 Case Keenum is on his fifth team in the NFL.

As we've been doing occasionally throughout training camp, let's take a peek in at the Philadelphia Eagles' NFC East divisional rivals to see what they are up to, shall we?

It appears Case Keenum will be Washington's Week 1 starter

In the three-man race between Case Keenum, Colt McCoy, and rookie Dwayne Haskins, it appears as though Keenum is going to be Washington's Week 1 starter against the Eagles:

From @NFLTotalAccess: The expectation is that the #Redskins start veteran QB Case Keenum to open the season, as Colt McCoy heals and rookie Dwayne Haskins learns. A look at where their QBs stand 👇🏽 pic.twitter.com/WlOQg7rkpE

There really isn't a bad option for the Eagles to have to face among the three quarterbacks. The only potentially troubling option would be if Haskins looked like the second coming of Warren Moon in the preseason, but that hasn't happened. Ultimately, Tom Brady could be Washington's quarterback and I don't think it would matter. They're not going to score many points this season.

Assuming Trent Williams is true to his word and he never plays another snap for Washington again, I'm not sure that team has a single offensive player who is better than any of the Eagles' starters at their respective positions. The only real debate would be for Brandon Scherff over Brandon Brooks at RG, and maybe Adrian Peterson over Miles Sanders (I'd take my chances with Sanders in 2019 all day, personally):

Hell, some of the Eagles backups would easily start for Washington.

Ezekiel Elliott and his agent did not like Jerry Jones' "Zeke who?" quip

After the Cowboys' second preseason game in which rookie running back Tony Pollard had a good game, Jerry Jones was asked if Pollard's strong showing gave the Cowboys negotiating leverage, to which Jones replied, "Who? Now Zeke who?"

Jones went on to clearly say he was just kidding, and that Pollard could complement Elliott's abilities, not replace them. Via Calvin Watkins of the Dallas Morning News:

"What's amazing for him is to come in here and he hadn't done that much," Jones said. "He knows exactly what to do, and he knows how to do it. If he goes out there and he plays to that level he's going to be [at] for the next several weeks, he's going to be right in the middle of it early. That will really complement what we're doing with Zeke, not replace that, I mean that, not replace it. Nobody is getting cute here, certainly be a great complement to have a great running game where I can picture those guys [having] success at the same time out there really giving the defense some fits."

Elliott's agent whined about those comments to Chris Mortensen of ESPN:

It drew a few laughs but neither @EzekielElliott nor agent Rocky Arceneaux found @Cowboys Jerry Jones' quip "Zeke who?" as amusing. Arceneaux: "I didn't think it was funny and neither did Zeke - we actually thought it was disrespectful."

Mortensen added that negotiations between Elliott and the Cowboys are basically non-existent at the moment:

Elliott is still training in Cabo San Lucas at a "great facility" during his contract holdout. No real activity yet on negotiations.

The Cowboys would ideally like to finalize Dak Prescott's deal before they turn their negotiating attention to Elliott and WR Amari Cooper. Of course, this all maybe should have been done in, oh, I don't know... JUNE? With 19 days before the start of the regular season, the Cowboys' best player is down in Cabo, and he feels disrespected, rightly or wrongly.

Giants rookie QB Daniel Jones has had himself a good preseason

Here are all of his throws Week 1 against the Jets:

And all of his throws against the Bears Week 2:

For now, the Giants are feeling vindicated in their selection of him at sixth overall in the 2019 NFL Draft. What is odd, however, is that owner John Mara is seemingly calling the shots on who plays quarterback for this team. At a minimum, he is clearly influencing that decision.

"Eli is our starting quarterback and will start the season," Mara said in an interview last week. "He’s obviously been a great representative of our franchise for a lot of years, and will continue to be, so we’ll just have to see how that one unfolds.

"I hope Eli has a great year and Daniel never sees the field. That would be an ideal world. You’d like to see that. Again, at the end of the day, it’s going to be a decision by the head coach as to when or if Daniel ends up playing this year."

Is it going to be the head coaches decision though? Asked if Jones could unseat Manning after the Giants' second preseason game against the Bears, Pat Shurmur volleyed responsibility right back to the owner.

"John owns the team, right? We’re on the same page," Shurmur said. "There is really not much more to say. I think I’ve been saying it all along. I just get a sense once in a while that when I answer those questions nobody believes me. Well you heard it from the owner."

From an outsider's perspective, it is insane to me that the Giants would do anything other than start Jones Week 1. This team, very clearly, is going nowhere in 2019, no matter who the quarterback is. The defense stinks, and while the offense has a few good players, it still has a long way to go. The organization's failure to recognize that is almost comical.

So why not just let the rookie -- who is probably already better than Manning anyway -- get as much experience under his belt now, so that if/when the team can add supporting pieces, he'll have a clue what it's like to play in the NFL?