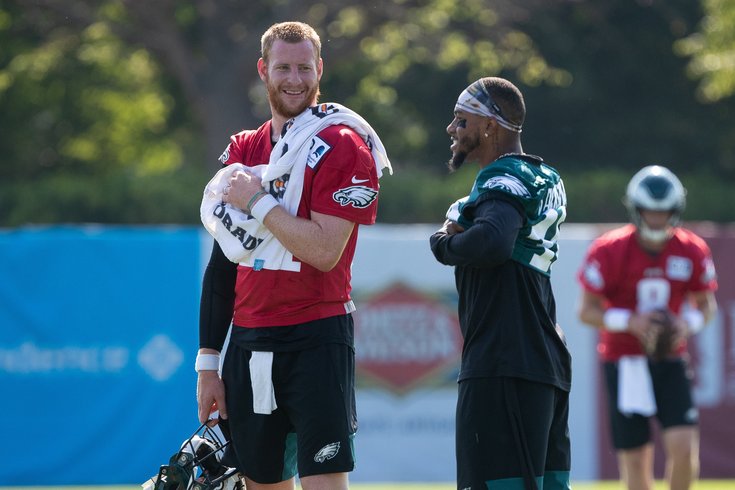 Put some air under it, Carson.

The Philadelphia Eagles kicked off a two-day session of joint practices on Monday with the Baltimore Ravens, which added some much-needed juice to the growing monotony of Eagles-only training camp. As always, we have notes.

• Today was a good day to go back to watching the starters, beginning with Carson Wentz, who was up and down. Here's what I saw out of him:

• Ever since his Week 2 preseason performance against the Jaguars, Clayton Thorson has looked, dare I say, good? In red zone drills, he hit J.J. Arcega-Whiteside in the back corner of the end zone, and fired a nicely placed ball near the sideline in the end zone to Marken Michel. Kudos to Michel for the foot drag to complete the catch.

Keeping four quarterbacks would be a waste of a roster spot, in my opinion, but if Thorson keeps playing the way he has in practice this week, he's going to make it a difficult decision to release him at 53-man cut-downs, in the hopes that another team doesn't claim him.

• The Eagles' first-team offensive line was dominant early in practice in the run game. There's no tackling, so it's not super easy to evaluate run game plays, especially from a sideline view, but it sure looked like they were opening up big holes. Corey Clement, Jordan Howard, and Wendell Smallwood all had nice gains on what looked like big alleys.

• The standouts in OL-DL 1-on-1's were Jason Kelce, Isaac Seumalo, Malik Jackson, and Derek Barnett. Barnett destroyed R.J. Prince (I don't know anything about Prince) on a nasty spin move. Barnett has worked hard on developing inside pass rush moves to complement his dip around the edge, and that inside spin is coming along nicely.

• Clement had a really nice day, both running the football and catching it. I've already mentioned this, but Clement looks like he's back to the 2017 version of himself. He had one reception where he caught the ball with his back turned toward the defense, and as soon as he caught it, he spun away from a defender and got yards after the catch. He was also running with a mean streak, looking to dish out some punishment when finishing his runs. Early in practice, Clement buried his shoulder into Earl Thomas' chest, resulting in a loud thud of the pads. Later, with Clement bearing down on him again, Thomas simply hopped out of the way of another Clement shoulder, causing Clement, who was expecting contact, to fall to the ground and roll. Veteran move by Thomas, lol.

After practice, Clement said that he feels like he is "100 percent." He looks it.

• We had an injury today. After catching a pass near the sideline, Richard Rodgers took a shoulder from a Ravens defender, and then headed up the field. He then went to the ground and was in obvious pain. It looked like some sort of non-contact injury. Trainers looked at his left leg, before a cart came out and took him away. If it is a serious injury, that could open up the door for Josh Perkins to make the team for the second straight year.

• Cody Kessler is back at practice. The Eagles may let him eat up some snaps in the third preseason game if they don't want to put Josh McCown out there yet.

• With GOAT kicker Justin Tucker in attendance, Jake Elliott was perfect kicking field goals today. He was 7 of 7. Let's go ahead and update his chart:

• I have some personal business to attend to tonight, so my apologies for notes that otherwise would have been a little more in-depth. Tuesday will be the last practice media will be able to watch in its entire for the rest of the 2019 season.