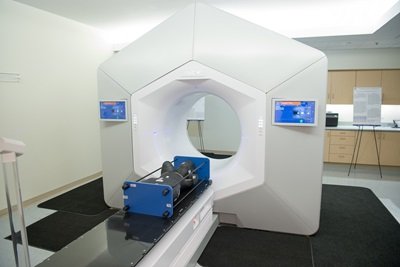 Doctors at the University of Pennsylvania this month became the first in the world to deploy a new radiation technology platform to treat a patient with head and neck cancer, showing promise for a therapeutic approach that could offer a more user-friendly method than current practices.

The Varian Halcyon system, introduced earlier this year as a breakthrough in radiation technology, dramatically simplifies and streamlines the clinical workflow involved in radiation oncology. Positioned as a human-centered CT machine, the platform automates the majority of tasks required in older, end-of-life technologies and cuts the number of steps for image-guided volumetric intensity modulated radiotherapy (IMRT) from about 30 to nine.

“This is a next-generation technology, and Penn is proud not only to have helped with its development, but also to build on our long history as radiation oncology innovators and be the first in the world to bring the new option to patients, as part of our continued pursuit to offer patients with cancers of all kinds the most advanced array of treatment options,” said James Metz, chair of Radiation Oncology at Penn Medicine.

Penn's collaboration with Varian began in 2015 with a goal of developing a platform that would be more accessible to technicians, more accommodating for patients and enable more efficient, intuitive training for future medical technicians.

At about twice the speed of older platforms, Penn's early tests of the machine found that Halcyon's radiation was comparable and in some cases more accurate than the standard radiation therapy platforms.

In the case of the first patient to receive the treatment, just 13 minutes were required to prep the therapy room, take images of the patient, apply the therapy and break the equipment down. The patient was under the beam for three minutes. In older platforms, it generally takes about 20 minutes to complete these steps, including 10 minutes of total beam time.

In the future, Penn plans to use Halcyon treat breast and cervical cancer patients. The platform will also be used to shrink tumors for symptom relief in patients with metastatic cancers.

“Penn’s department of Radiation Oncology is a national and global leader in both proton and conventional radiation therapy including the development of global training and education courses,” Metz said. “Partnering with outside innovators to test and bring new technologies to the clinic is a great example of our leadership and collaboration in the field, and our commitment to offering more options to the patients we care for.”