Ultrathin corrugated material could spur breakthroughs in aviation and other applications 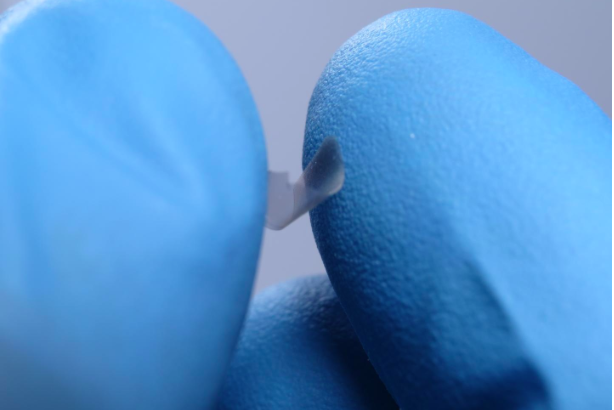 University of Pennsylvania researchers developed a nanoscale plate made of aluminum oxide that can be manipulated by hand without damage to the structure.

Researchers at the University of Pennsylvania have developed the world's thinnest nanoscale material that can be picked up by hand and bent, marking a potentially groundbreaking advancement in structural design and engineering.

The plates, thousands of times thinner than a sheet of paper, are made of aluminum oxide and are between 25 and 100 nanometers thick, Eurkalert reports.

The challenge presented to researchers, who published their findings in the journal Nature Communications, was to develop a material that can be manipulated by hand and maintain its integrity without additional support.

"Materials on the nanoscale are often much stronger than you'd expect, but they can be hard to use on the macroscale" said study leader Igor Bargatin, a Mechanical Engineering and Applied Mechanics professor in Penn's School of Engineering and Applied Science. "We've essentially created a freestanding plate that has nanoscale thickness but is big enough to be handled by hand. That hasn't been done before."

The plates could signal breakthroughs in the field of aviation and in other applications where lightweight structures are a critical need. While similar nanoscale materials such as graphene have been hailed for their electrical properties and mechanical strength, many of them have only been useful under controlled conditions, or with supporting structures like framed canvas to prevent them from naturally deforming.

"The problem is that frames are heavy, making it impossible to use the intrinsically low weight of these ultra-thin films," Bargatin said. "Our idea was to use corrugation instead of a frame. That means the structures we make are no longer completely planar. Instead, they have a three-dimensional shape that looks like a honeycomb, but they are flat and contiguous and completely freestanding."

The plates fall under the category of the emerging field of mechanical metamaterials, which aim to achieve robust properties like stiffness and strength through the arrangement of minuscule features. With corrugation, the Penn researchers have opened up the possibility of creating wings that will remain rigid despite boasting ultra-low thickness.

They also escape the risk of tearing or cracking when picked up, a tendency common among ultra-thin films once they are applied and conform to the shape of a given surface.

"Aluminum oxide is actually a ceramic, so something that is ordinarily pretty brittle," Bargatin said. "You would expect it, from daily experience, to crack very easily. But the plates bend, twist, deform and recover their shape in such a way that you would think they are made out of plastic. The first time we saw it, I could hardly believe it."

The research was supported by a grant from the National Science Foundation.