Researchers at the University of Pennsylvania have a new target to fight prostate and lung cancer.

A team led by Marcelo Kazanietz, Ph.D., a professor of systems pharmacology and translational therapeutics, identified a molecular chain of events that could lead to new treatments. The research, published in the Cell Reports journal, focuses on a protein called PKCε. 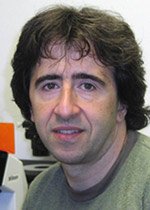 Researchers found that the "overexpression" of PKCε – the body makes too many copies of the protein – with the loss of tumor suppressor Pten causes progression of prostate cancer in mice. That combination increased levels of the cancer-promoting molecule CXCL13.

When researchers disrupted that molecule or CXCR5, the cell-surface receptor it attaches to, it impaired the mouse prostate cancer cells' ability to spread and form tumors.

"In addition to providing evidence for a vicious cancer cycle driven by PKCε, our studies identified a compelling rationale for blocking the CXCL13-CXCR5 molecules as a new cancer treatment," Kazanietz said in a statement. The team plans to identify compounds to block CXCR5 or CXCL13 with potential to be developed as anti-cancer agents. The researchers believe that CXCL13 levels in blood might be used to measure the level of prostate cancer progression in a patient.

A similar overexpression of the PKCε protein is seen in lung cancer patients, but doctors do not fully understand its exact molecular consequences. In general, a high level of PKCε is associated with a poor prognosis.

"We are in the midst of extending these findings to lung cancer," said Kazanietz.

The research was funded, in part, by the National Institutes of Health and the Department of Defense.