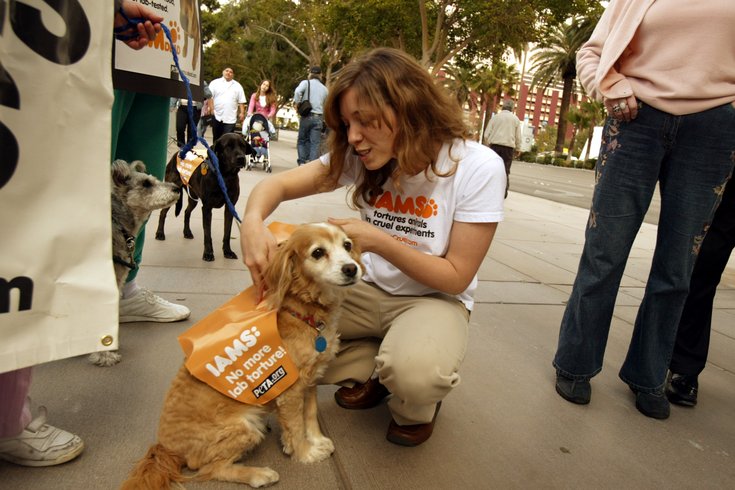 Allison Ezell of People for the Ethical Treatment of Animals (PETA) places a banner on "Stella," Tuesday, Feb. 24, 2004, on the Las Vegas Boulevard "strip." The organization claims IAMS pet foods mistreats animals in its product testing.

A student at Penn Vet is looking to revolutionize animal testing practices in pharmaceutical research and, in turn, save countless human and animal lives.

Benjamin Lewis, a seventh-year, dual-degree student in the University of Pennsylvania’s School of Veterinary Medicine and the Wharton School of Business, founded the startup Ethical Animal Research, which provides drug researchers with already-ill animals to use as testing subjects, as opposed to healthy animals.

The existing process has three steps. First, “you’re inducing horrific diseases [in the animals], then you test [the drug] on the animal” and finally “you kill it,” - Benjamin Lewis.

"If pharmaceutical companies can fail their drugs earlier, at the animal testing stage, they can save hundreds of millions of dollars spent developing drugs that will eventually not get federal Food and Drug Administration approval."

In an interview with The Daily Pennsylvanian - Penn’s student newspaper – Lewis gave the example of testing a diabetes drug to explain the purpose of his company.

Right now, a big pharmaceutical company will induce diabetes in healthy animals to test the drug before advancing to human trials. Instead, Ethical Animal Research will crowd-source already sick animals to provide drug companies with a population of animals to test their drugs on.

The existing process has three steps. First, “you’re inducing horrific diseases [in the animals], then you test [the drug] on the animal” and finally “you kill it,” he said.

But, Lewis told The Daily Pennsylvanian, the animals aren’t the only ones who can benefit from this novel method; humans would, too, since using sick animals would likely lead to more accurate outcomes, compared with the current model, in which 92 percent of studies in animals fail in humans.

Currently, Ethical Animal Research has about 100,000 animals in its recruitment base, Lewis told The Daily Pennsylvanian. Soon, he said, it hopes to add 600,000 and eventually grow into the millions.

Click here to read the full article by The Daily Pennsylvanian.