The most popular person on TV? Pennsylvania and New Jersey have two different ideas, according to one recent report.

The folks over at CableTV.com and Reviews.org, a website that analyzes technology products, teamed together to create a map that shows each state's most beloved talk show host published earlier this week.

In line with the majority of the nation, Pennsylvanians are big fans of Ellen DeGeneres of NBC's "The Ellen Degeneres Show" while TV watchers in New Jersey most prefer James Corden, host of "The Late Late Show" on CBS according to the map.

Ellen was the favorite in 10 states across the nation, including places like Rhode Island and Wisconsin.

Could it be any surprise though? Ellen did show a lot of love to her fans in Philadelphia during a surprise visit to the City of Brotherly Love in March. 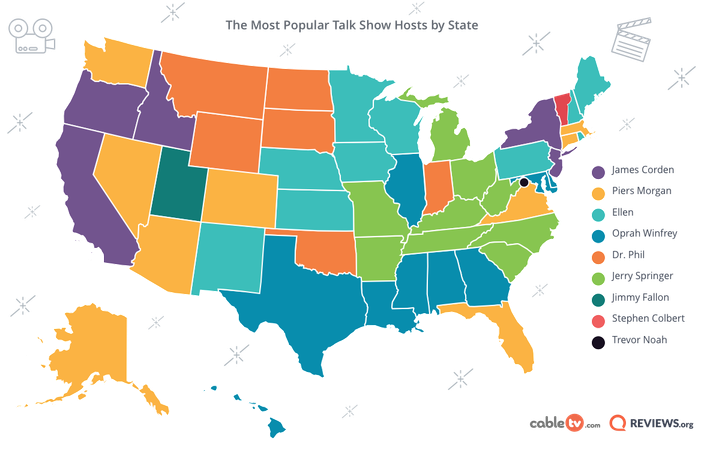 The map also broke down each state's thoughts on individual TV rivalries, finding that both the Keystone State and Garden State were pretty much on the same page.

When it came to the Jimmy Fallon versus Stephen Colbert battle, watchers in both Pennsylvania and New Jersey would rather take Fallon while they prefer Trevor Noah's political commentary over John Oliver's.

Daytime TV? New Jersyans and Pennsylvanians like Jerry Springer more than Dr. Phil, according to the map.

However, TV fanatics in New Jersey would still prefer Oprah Winfrey to Ellen when it came to "daytime dames."

The websites found the results by analyzing Google trends data from the past five years to see what shows and hosts each state looked for the most.

Check out the full map here.