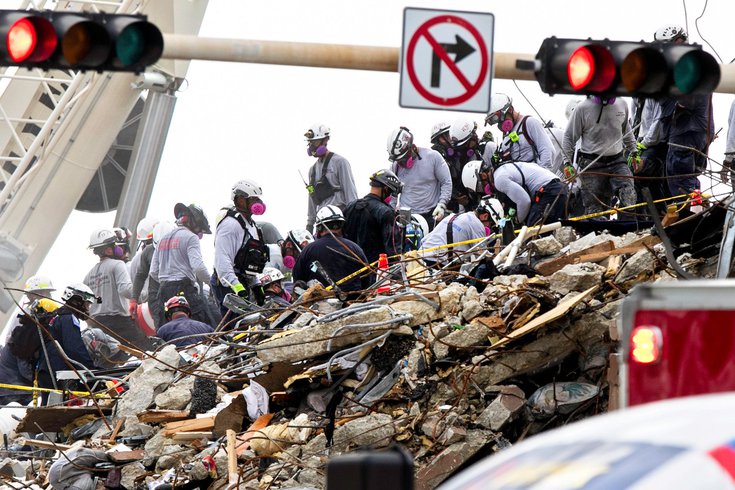 Emergency task forces from Pennsylvania and New Jersey that were deployed earlier this month to assist with search and rescue efforts in Surfside, Florida, returned home Friday.

Both states sent dozens of first responders and emergency search and rescue personnel to aid in the rescue efforts following the condominium collapse in Florida that claimed the lives of 97 people. Many people remain missing.

Officials said there is no longer any chance of pulling survivors from the rubble.

Pennsylvania's Task Force 1 returned after a 17-day stint helping in recovery efforts, according to a press release. The 80 person group was one of 28 federal urban search-and-rescue teams overseen by FEMA that deployed to help after the collapse.

The team was sponsored by the Philadelphia Fire Department and included members of the PFD, as well as first responders throughout the region.

Half the team worked at the site from noon to midnight, while the others worked from midnight to noon. They were responsible for recovering remains and personal property, delayering debris, assisting crane operations and mapping and collecting data.

“It was exhausting. It was a tragic event down there but now, as you can see, we’re glad to be back home,” Nkosi Wood with the Philadelphia Fire Department told CBS3.

Among the first responders sent from Pennsylvania was Memphis, a search and rescue dog from Montgomery County. She is specially trained to find humans in collapsed structures.

Gov. Tom Wolf welcomed the task force back as they arrived from Florida Friday. The scene was emotional and several members were hugging and crying.