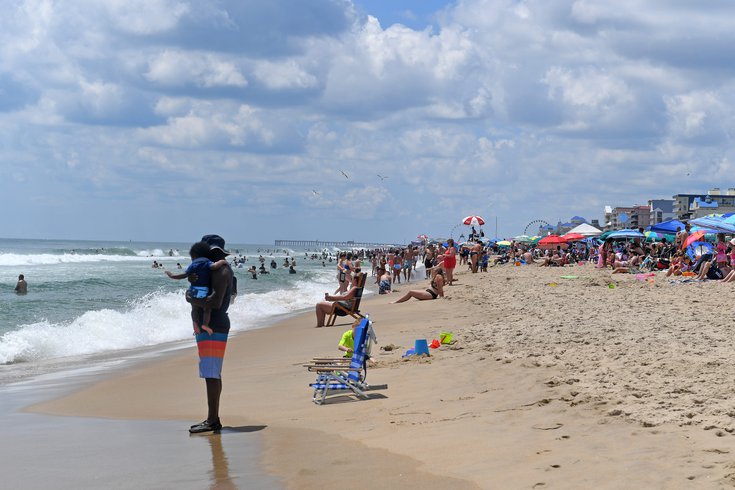 A presumed shark attack in Ocean City, Maryland, on Aug. 2, 2021 is being investigated by the Ocean City Beach Patrol. The file photo above shows people on a beach in Ocean City on July 3, 2021.

A 12-year-old girl received 42 stitches to treat a presumed shark bite she suffered on Monday during a swim in Ocean City, Maryland, officials said.

The girl, a native of Plains Township in Luzerne County, was visiting the popular beach destination with her family when the incident happened in shallow water at the 119th Street Beach.

"I didn’t really realize what was going on until I was on the beach and I was bleeding everywhere," Jordan Prushinski, the victim, told WBRE/WYOU. "I was swimming and a wave had just crashed and I was right on the edge of the crash zone, I thought a horseshoe crab had got lifted up and hit against my shins, and I don’t like the sea creatures so I rushed out immediately to find blood everywhere, with cuts all over my left leg."

Prushinski received first aid from members of the Ocean City Beach Patrol and bystanders who were able to provide assistance. She was later taken to Atlantic General Hospital in Berlin, where she received the stitches for 20 different cuts on her leg. The ER doctor at the hospital told Prushinski and her family the injuries appeared to be consistent with a shark bite.

A spokesperson with the Ocean City Beach Patrol said Wednesday morning the incident remains under investigation. No advisories were issued for swimmers at the beach.

Shark bites are extremely rare, with odds somewhere around one in 4 million, according to the International Wildlife Museum. In 2020, an unusually bad year for shark bites, there were 10 fatal incidents globally and 57 non-fatal shark bites.